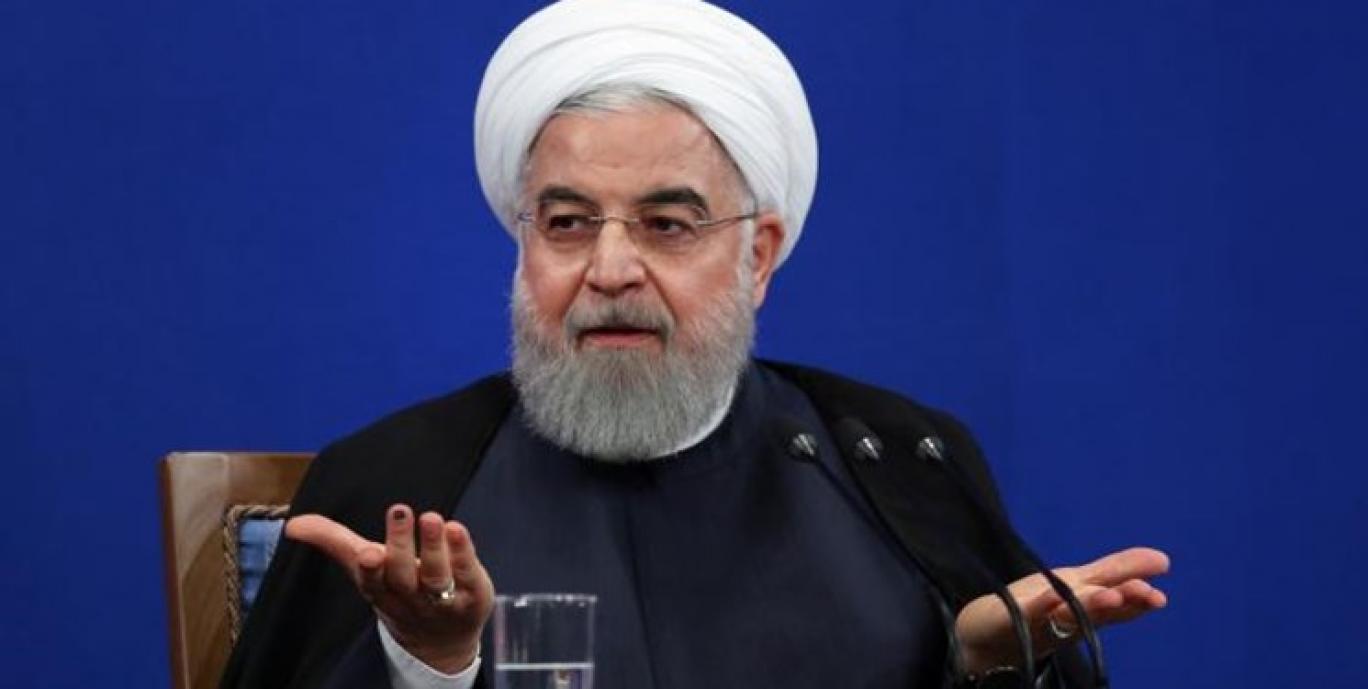 Rouhani Voices Support for Talks with the U.S.

Rouhani Voices Support for Negotiations with the U.S.

President Rouhani during his weekly cabinet meeting said the centrifuges damaged in the Natanz explosion will be replaced by more advanced centrifuges: “Our first action is that they created problems with the IR-1 [centrifuges], and we have replaced them with the IR-6 [centrifuge].”

Rouhani added: “You want our hand to be empty in negotiations. But we will show up at negotiations with a full hand. Instead of enriching at 3.67%, we are enriching at 60%. At the same time, our activities are exclusively and definitively peaceful and still under IAEA supervision.”

Rouhani said Iran would negotiate with the United States: “We are strong, not weak. We will negotiate with America and put it in its place. Just like we did in the past. We have strong logic for negotiations and can persuade the enemy.”

Rouhani said that “no faction or individual can hold hostage the peoples’ livelihood for the election.” He added: “The hands of the oppressor, who has taken the peoples’ lives hostage even for attaining vaccines and food, must be cut. Some people say that the hands of the oppressor must be cut, but not [in the Iranian months of] Ordibehesht and Khordad [corresponding to April 21st to June 21st]. And if it reaches [the Iranian month of] Tir [June 22nd-July 22nd], there is no issue.

Rouhani added in this regard: “This is as the hands of the oppressor must be immediately cut. If we can even do this one hour earlier, we must do it.”

Rouhani said Iran should not be “afraid” of negotiations. He stated: “Why are we afraid of negotiations and talking? Doesn’t the Quran say you should interact with non-believers? We are strong, we shouldn’t see ourselves as weak. Don’t think we are weak. We are strong and can negotiate even with America … Who says we’re incapable when it comes to negotiating with a superpower?”

Rouhani further said to domestic forces “worried” about a quick removal of sanctions: “Some people are scared. They are worried that these negotiations will reach a result soon and sanctions will be immediately lifted. And that they will have problems in the election. It’s not like this. Negotiations have their own complexities. Don’t be so worried.”

Rouhani added that Iran was not in a “rush” for negotiations. He stated: “We are not in a rush for negotiations and this depends on the other side. We are ready and our words are clear. We say America must return to the same situation of the year we signed the JCPOA, in July 2015. And that agreement we had and to implement it on the basis of UN Security Council Resolution 2231. Our words are clear. As soon as America implements this and we witness that it is correct and operational, we will immediately return to all our commitments.”

Rouhani said Iran will return to the JCPOA “the same day” as the United States. He stated: “Whenever the other side returns to its commitments, that same day we will return to the JCPOA. On the condition that we see in practice that it is really abiding by its commitments and we verify this. This won’t take long. Because some don’t understand, they say things. This is as we have designed the conditions for verifying and we know it won’t take long. For the oil minister to say he can say oil and the Central Bank chief to say he can move around money easily, this won’t take a lot of time. When they abide by their commitments in a real and practical way, we will immediately return to our commitments.”

Iran has said it will respond to an act of sabotage at its Natanz uranium enrichment facility by increasing its level of uranium enrichment to 60 percent. Deputy Foreign Minister Abbas Araghchi, who returned to Vienna on April 13th in preparation for a new round of talks on the JCPOA beginning on April 15th, announced this in a letter to the International Atomic Energy Agency (IAEA).

Ali Rabiee, the Rouhani administration’s spokesperson, also said that the damaged IR-1 centrifuges at Natanz will be replaced by IR-6 centrifuges.

Salehi said the sabotage has not stopped uranium enrichment at Natanz. He said power had been restored to the facility and that affected centrifuges would be replaced by more advanced centrifuges in the “coming days.”

Foreign Ministry Spokesperson Saeed Khatibzadeh said only the relatively primitive IR-1 centrifuges were affected by the act of sabotage. He added that the sabotage won’t stop Iran’s “nuclear industry” or the path of U.S. sanctions on Iran being lifted.

Foreign Minister Zarif also said the sabotage will strengthen Iran’s position in negotiations on the JCPOA. He said Iran can now “fill” Natanz with more advanced centrifuges that have “multiple times the enrichment capacity” of the IR-1 centrifuges.

The explosion in Natanz came amid diplomatic progress between Iran, the U.S., and the other JCPOA parties on reviving the nuclear deal. Araghchi arrived in Vienna early in the week and said Iran expects the U.S. to provide a list of the sanctions it will remove, stating: “We believe this round of negotiations is the time for the U.S. to present a list and I hope that I can go back to Tehran with the list of sanctions which should be lifted. Otherwise, it would be a waste of time.”

Former MP Heshmatollah Falahatpishe discussed Israel’s motivations with the act of sabotage. The attack has been blamed on Israel by U.S. and Israeli outlets and Iranian officials.

Falahatpishe said Israel wants the U.S. to end talks on reentering the JCPOA. He stated: “Israel is trying to get the Americans to agree that with attacks, whether cyber or military, it can prevent a growth in Iran’s capabilities and that there is no reason for America to give Iran concessions in this regard.”

Falahatpishe said the attack could not have been carried out without a “greenlight” from the United States. The U.S. has denied involvement in the act of sabotage.

Zarif also said Israel sought to provoke and “trap” Iran. He stated: “The Israelis want to provoke Iran so that Tehran falls into the trap of reactive actions so they could use the opportunity this presents.” Zarif asked that Iranians not fall into Israel’s “insidious trap.”

MP Alireza Zakani, the head of parliament’s research center, said “thousands” of centrifuges were destroyed as a result of the Natanz act of sabotage. Zakani strongly criticized security measures at Iran’s nuclear sites and called for greater accountability.

Zakani, a conservative MP, said some members of parliament “cried blood” after the recent explosion in Natanz. He also talked about past security lapses in Natanz.

Zakani said that in the past, a piece of equipment at Natanz was sent abroad for repair. He said this was returned to Iran with 300 pounds of explosives attached to it. He strongly criticized what he said was the “inattentiveness” of security forces on this matter.

Zakani also cited an incident of a “sensitive work desk” being laced with explosives. He suggested this was the cause of last summer’s explosion at Natanz.

Zakani also said that promises from other officials that the damage at Natanz would be redressed soon were “incorrect promises.” He also said spies are freely moving around Iran.

MP Fereydoon Abbasi, who was formerly the head of the Atomic Energy Organization of Iran, said the “enemy’s plan was very beautiful” regarding the Natanz sabotage. Abbasi said nine years ago, a similar plan was executed against Iran’s Fordow enrichment facility. He said this involved cutting the electricity within a 30 km radius of Fordow and then having “infiltrators” destroy “batteries” inside the facility.

Mohsen Rezaee, a former commander of the IRGC and the current head of the Expediency Discernment Council, said Iran suffered from “security pollution.” He said in less than one year, Iran was subject to two explosions [both at Natanz] and one assassination [of scientist Mohsen Fakhrizadeh].

Rezaee also said that in recent years, secret nuclear documents were stolen from the countries.

Sadegh Zibakalam, a University of Tehran professor, sarcastically said about Iran’s security lapses: “One reason for the capability of spies in the assassination Fakhrizadeh and [setting off] the explosion in Natanz is that the country’s security officials are busy trapping skilled and dangerous spies like Nazanin Zaghari, Fariba Adelkhah, environmentalist activists, Siamak Namazi and his 80-year-old father and …”

The EU has imposed sanctions on eight Iranian individuals and three prisons in Iran for human rights violations. Specifically, the EU says they have been sanctioned for their role in suppressing the November 2019 gas-price hike protests that swept the country.

Khatibzadeh said the Comprehensive Dialogue Iran is “suspending” with Europe has to do with human rights, terrorism, drug trafficking, and refugees.