Rohrabacher on Tehran Terror Attacks: “Isn’t That a Good Thing?” 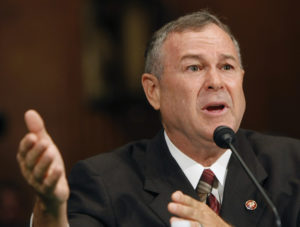 Republican congressman Dana Rohrabacher (CA-48), who represents more Iranian Americans than nearly any other lawmaker in the House of Representatives, suggested on Thursday that the recent ISIS terror attacks in Tehran were a positive development during a House Foreign Affairs Committee hearing on Hezbollah. Rohrabacher’s apparent praise for the attacks, which left 17 Iranians dead, came after President Donald Trump issued a statement condemning the attacks but also suggesting that Iran had deserved to be struck.

“We have recently seen an attack on Iran, and the Iranian government – the mullahs, I believe that Sunni forces have attacked them,” noted Rohrabacher before suggesting that the attack could be a “ratcheting up” of U.S. commitments against Iran. He then asked the panel, “Isn’t it a good thing for us to have the United States finally backing up Sunnis who will attack Hezbollah and the Shiite threat to us, isn’t that a good thing? And if so, maybe…this is a Trump strategy of actually supporting one group against another.”

Panelist, Dr. Matthew Levitt, firmly responded to his outrageous question, “Those attacks were claimed by the Islamic state. It is never in our interest to support a terrorist group like the Islamic state. We should condemn the attacks on Iran as we would condemn any act of terrorism.” This answer did not seem to satisfy Rohrabacher, as he interrupted Levitt to assert that even though Joseph Stalin was a “horrible guy,” maybe we should team up with him if it means defeating Hitler.

Rohrabacher concluded, saying, “Maybe we should consider having radical Muslim terrorists fighting each other, I’ll leave it at that.”

Rohrabacher has a long history of bizarre and offensive statements on Iran, but his callousness toward the Iranian victims of ISIS terror might be his most callous and extreme thus far. Furthermore, he appears to suggest, without any evidence – that the Tehran attacks could have been part of a Trump master plan to target Iran. There is no indication supporting the theory of U.S. or any other nation’s involvement in the attack, yet hardliners in Iran have hinted at such motivations in the wake of heightened anti-Iran rhetoric in Saudi Arabia following Trump’s visit to Riyadh.

The congressman is a close ally of President Trump’s and was previously under consideration for a Secretary of State. He also represents a swing district that voted for Obama in 2008 and Clinton in 2016. According to the most recent census data, more than 8,000 Iranian-Americans reside in Rohrabacher’s district, making it one of the most populous districts for Iranian Americans in the country.