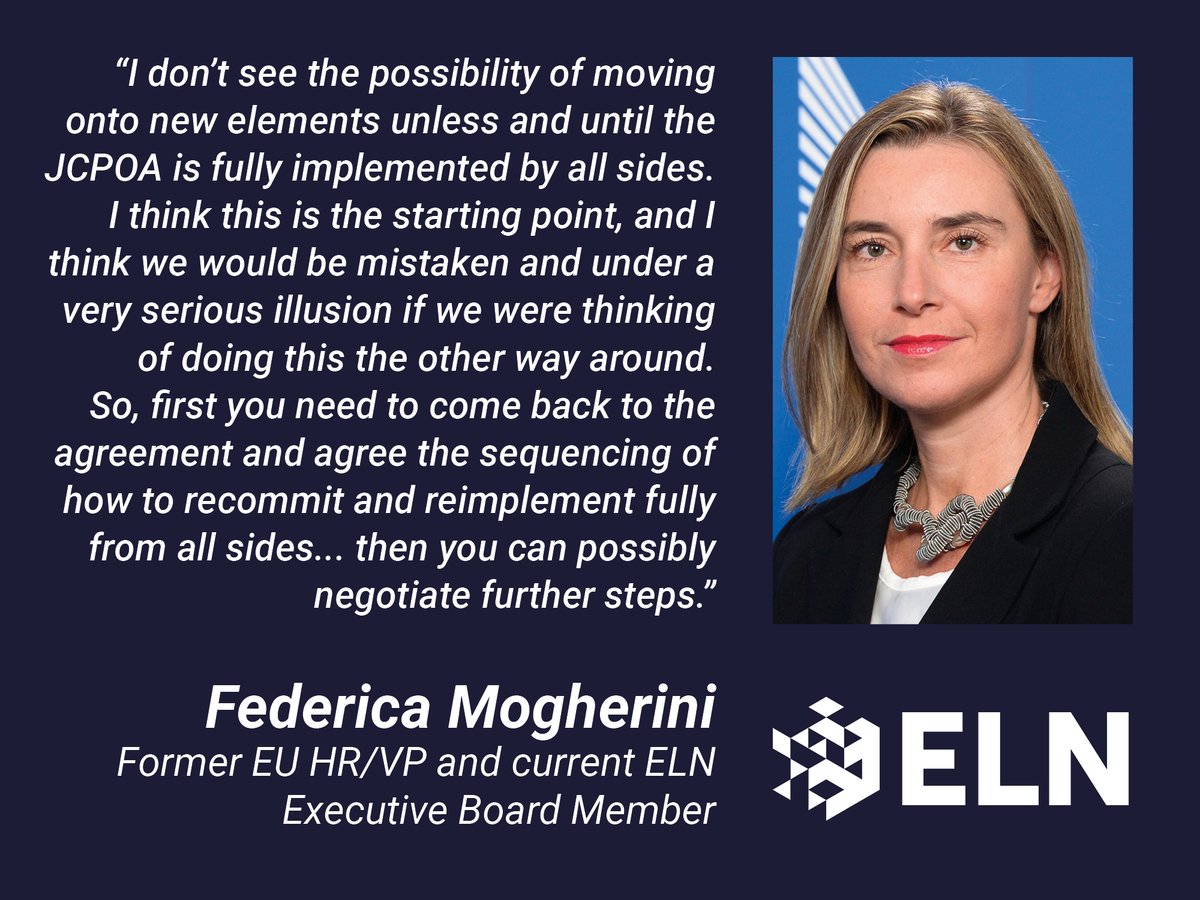 It would be hard for anyone to smile when talking to the people that dubbed one of your crowning achievements a “zombie accord.” But Federica Mogherini, the Former High Representative for Foreign Affairs and Security Policy for the European Union, took it in stride. To Mogherini, the continued relevance of the Joint Comprehensive Plan of Action was an achievement in itself. “When the announcement was made by President Trump about the US leaving the agreement, not many of us would have bet on the agreement being able to survive this stress test,” Mogherini said.

“It’s not in good health, but it’s alive, and this is thanks to the determination and the unity, not only of Europeans, but also of the Europeans together with the rest of the international community.”

Mogherini shared her views in an event titled “Renewing Transatlantic Strategy on Iran,”  a discussion building upon a recent joint publication on the same topic from the Atlantic Council and the European Leadership Network. The piece presents a possible blueprint for how Europe could assist the Biden administration in returning to the JCPOA before the Iranian Presidential elections in June. She was joined this Thursday by it’s authors: Ellie Geranmayeh, Deputy Director of the Middle East and North Africa Programme at the European Council on Foreign Relations; Barbara Slavin, Director of the Future of Iran Initiative at the Atlantic Council; and Sahil Shah, Policy Fellow at the European Leadership Network. Borzou Daragahi, International Correspondent for The Independent, served as moderator.

As Mogherini said, a great deal of the options now on the table are thanks to European efforts, such as resisting the Trump administration’s disingenuous attempts to “snap back” UN sanctions this fall, and continued engagement with Iran through the Dispute Resolution Mechanism. Credit was also given to Iran for the “strategic patience” exhibited, with Shah urging that Biden should take “as much of an accommodating position as possible.”

But the options available to the Biden administration are shaped by the outgoing administration just as much as by the EU. Slavin reminded the panel that, “President Trump, so frustrated that maximum pressure has been a maximum bust, actually asked for options on bombing Iran.” When asked whether Trump or other detractors would engage in hostilities, Slavin responded, “Bibi Netanyahu may see the next two months as his last window for something rather dramatic against Iran. We’ve already seen a lot of cyber attacks, mysterious explosions… I wouldn’t rule it out.”

Even with the Biden administration’s favorable opinion of the JCPOA, the economic bargain required for Iran to return to compliance may be contentious in the US. When discussing sanctions relief, Geranmayeh pointed out that on human rights and terrorism issues that are not focuses of the nuclear deal, “I think there will be some disagreements, even among Democrats.” But in order to reach negotiations on those issues, and to ensure overall security, the panelists were adamant that securing the JCPOA would need to come first. As Mogherini said, “There is no way in which any Iranian leadership can engage in a new agreement unless the JCPOA is first fully implemented on both sides.”

Nonetheless, Slavin had confidence that the Biden administration would be able to enact important goodwill measures, like ending the Muslim ban and easing sanctions preventing diplomacy and humanitarian aid. These measures would not only provide relief to Iran, but Europeans that have been held back by red tape. Mogherini believed Biden’s measures would unbind European negotiators’ hands to act, “through the instruments in place like INSTEX,” and, “without punishments from the US.”

The discussion also brought to the forefront an often forgotten victim of JCPOA noncompliance. “Let’s not forget that the biggest hit has been felt by ordinary Iranian people,” noted Geranmayeh. She went on to note that sanctions left Iranians with reduced access to medicine and healthcare, which is especially worrying considering the resurgence of Covid-19 in Iran. As the brief outlines, Biden’s administration could lead the way on Covid assistance through the World Bank or IMF in the short term, while building on the universality of the issue to encourage mutual civil society engagement.

Returning to the nuclear deal and engaging in goodwill measures could jumpstart negotiations beyond the nuclear file, as the panel discussed. Mogherini noted that, after the JCPOA was signed, the US and Europe “convened all regional powers for the first time” to discuss the Syria crisis.

But compliance must be the first step, and for all the obstacles it faces, the panelists believe both heads of state are ready to negotiate. Mogherini stressed from the beginning that Iran declared, “I think in good faith,” that all their noncompliance measures were reversible. Biden, for his part, has recruited agency review teams that have “prior experience under the Obama administration dealing with Iran,” according to Slavin. The so-called “zombie” accord may yet get the treatment it needs, if the Biden administration, Iran, and the EU have anything to say on the matter.