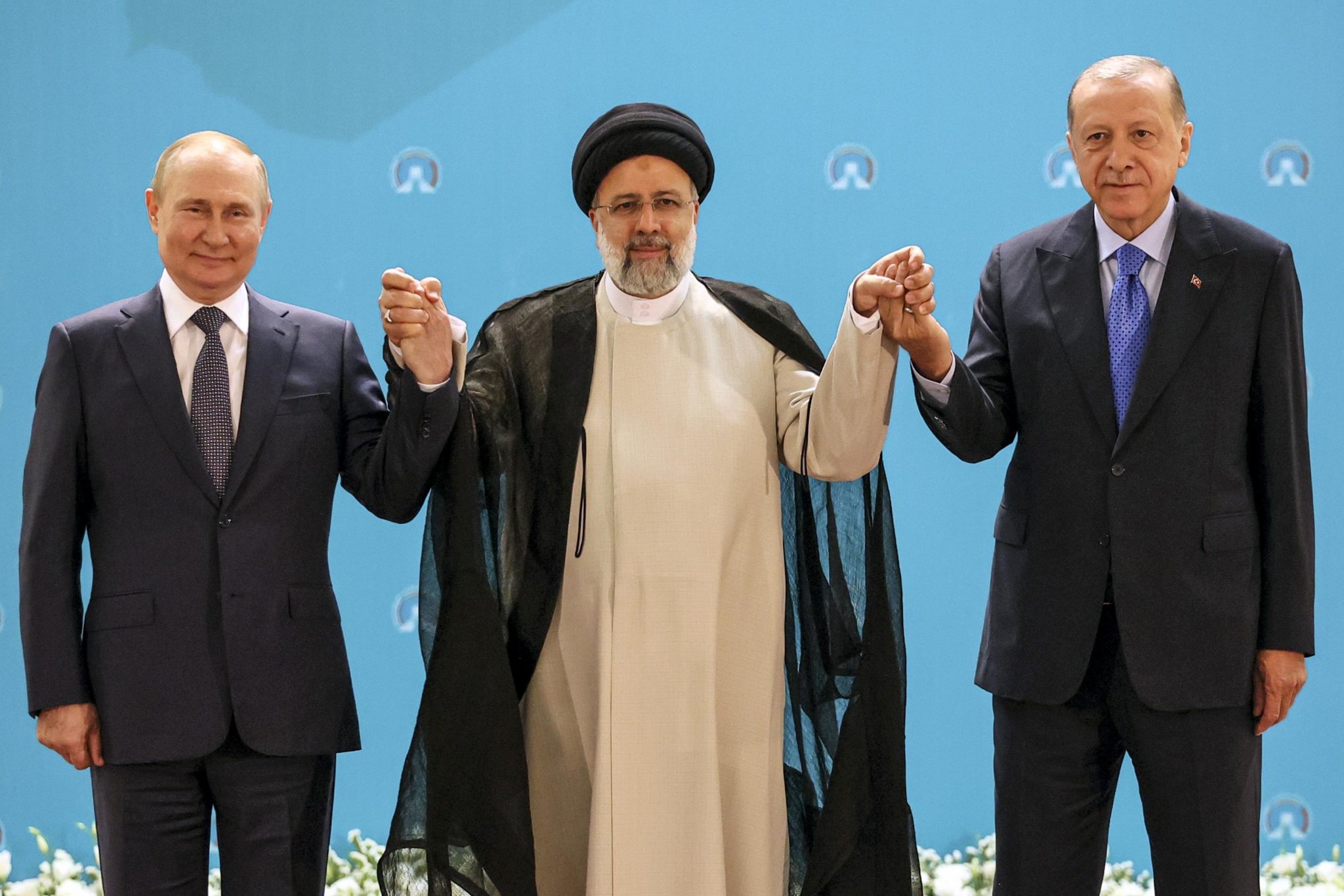 Russian President Vladimir Putin traveled to Tehran on July 19 for a two-day visit. He visited Iran for a summit of the Astana process Syria peace talks and was joined by Turkish President Recep Tayyip Erdogan. This was the first visit to Iran by the Russian and Turkish presidents since the inauguration of Ebrahim Raisi.

Putin met with Iran’s Supreme Leader Ayatollah Ali Khamenei and Raisi. Khamenei praised “long term cooperation” between Iran and Russia and called for the finalization of oil and gas deals between the two countries.

Khamenei said to Putin that U.S. military forces must withdraw from Syria. He specifically said the U.S. troops “east of the Euphrates” and in “oil-rich” areas must be “expelled.”

Khamenei also defended Russia’s invasion of Ukraine. He criticized NATO expansion and said that if Russia had not taken the “initiative,” the “other side would have taken initiative and started war.”

Khamenei also warned Erdogan against Turkey launching an invasion of northern Syria. He said such an incursion would “help terrorists.”

Against this backdrop, Gazprom and the National Iranian Oil Company signed a memorandum of understanding (MOU) to develop Iran’s oil and gas fields in the Persian Gulf. While Iranian officials hailed it as a $40 billion agreement and the biggest deal in the history of the Iranian oil industry, Gazprom did not attach a monetary figure to the MOU.

Meanwhile, the U.S. National Security Council spokesman John Kirby said Putin’s trip to Iran showed how isolated he had become. Kirby added that there is “no indication yet that Iran has given drones to Russia,” which the U.S. has alleged it intends to do but Iran denies.

U.S. Special Envoy to Iran Rob Malley said Iran will face more sanctions if it sells drones to Russia. He added, “Iran has a choice now. It can opt for a position of relative dependency on Russia and have a very narrow economic opportunity, or it can choose to come back into the deal and have more normal economic relations with its neighbors, Europe, and the rest of the world.”

In this context, Kamal Kharazi, an advisor to Ayatollah Khamenei on foreign policy and head of Iran’s Strategic Council on Foreign Relations, said Iran has the “technical capability” to make a nuclear weapon. He added that Iran has decided not to develop the bomb but that its nuclear capabilities provide deterrence.

Iran’s Foreign Minister Hossein Amir Abdollahian also spoke to his Qatari counterpart over the phone this week. He said a nuclear deal is still possible if the U.S. drops its “maximalist” demands.

Iran’s compulsory hijab law is under heightened public criticism amid stricter enforcement by the morality police. Recent issues of Iran Unfiltered have detailed a push by authorities to enforce more restrictions on women deemed to wear “improper” hijab, as well as campaigns against the mandatory hijab law in recent weeks.

Two videos that recently went viral on Iranian social media spurred widespread outrage and public debate over the mandatory hijab law. In one video, a conservatively dressed woman is seen confronting a woman she says is not wearing a hijab on a bus, before being removed from the bus by other passengers. In another video, a mother is seen throwing herself on a morality police vehicle, calling for the release of her daughter who was arrested and inside the van.

The woman in the first video who was harassed over allegedly not wearing a hijab was later arrested, according to outlets close to the IRGC. BBC Persian reported that this woman’s name is Sepideh Rashno. The woman who harassed her posted on her Instagram that the incident happened last weekend, but Fars News said it occurred “one month ago.”

Several hashtags went viral on Iranian social media in the wake of these videos. These hashtags voiced opposition to the compulsory hijab law and the morality policy. Some hashtags also professed to be women who voluntarily wear the hijab but are against its mandatory enforcement.

Internationally acclaimed Iranian filmmaker Jafar Panahi has been taken to prison to complete a six-year sentence. His sentence derives from his 2009 arrest and charges of “propaganda against the system” after he participated in protests over the contested presidential election that year.

Panahi was arrested recently amid a new crackdown that targeted several other filmmakers and documentarians as well. As covered in a recent issue of Iran Unfiltered, directors Mohammad Rasoulof and Mohammad Aleahmad were also arrested.

The judiciary spokesperson said this week that Panahi has been returned to prison to complete his original six-year sentence. It is unclear how long he will be kept in prison. He spoke to his wife three days after his arrest and said he still had not been provided with “food and water” and said his arrest was an example of “kidnapping.”