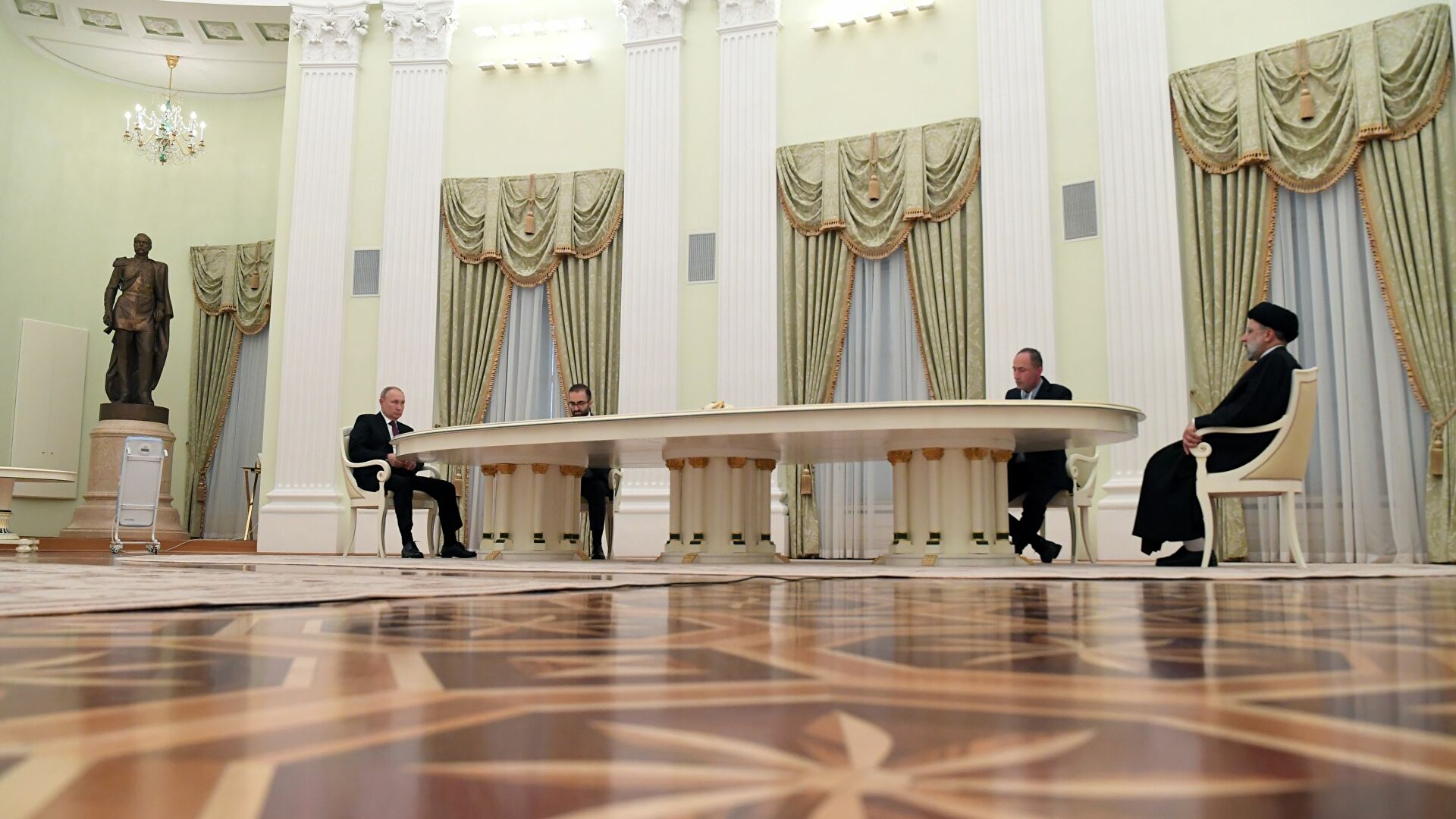 Iran’s President Ebrahim Raisi travelled for a state visit to Moscow on January 19th. Raisi was accompanied by a large economic and political delegation, including his government’s ministers of the economy, finance, oil and foreign affairs. It is the first visit by an Iranian president to Russia in over five years.

According to Iran’s Foreign Minister Hossein Amir Abdollahian, Raisi and Russian President Putin had an over three-hour long meeting. According to the Kremlin, the two presidents talked about all areas of bilateral Iran-Russia cooperation, including the negotiations to revive the JCPOA.

Putin told Raisi that Iran-Russia cooperation in Syria was a victory over “international terrorism.” Iranian and Russian support played a decisive role in preserving the rule of Syrian President Bashar al-Assad.

Raisi expressed Iran’s desire to expand political, economic, and security relations with Russia. Raisi says that his government has “no limits” on expanding ties with Russia.

Raisi said about Russian-Iranian cooperation in the Middle East: “The existence of mutual interest and engagement between Tehran and Moscow creates security for the region and stands against unilateralism in the world.”

Raisi said at the Duma that Russian-Iranian cooperation in Syria was a successful model. He praised “Mr. Putin’s smart leadership” on Syria.

Raisi said America is the “weakest it has ever been” and NATO was “destructive.” He called for a “cultural NATO.”

Raisi said U.S. sanctions on Iran are imposed with the “excuse” of the nuclear issue. He said they are really aimed at “creating instability in Iran.”

One of the aims of Raisi’s trip to Russia is to advance an agreement for long-term “strategic” Iran-Russia cooperation. Raisi has designated his foreign minister Abdollahian as responsible for pursuing this agreement, which envisions deeper economic and security ties between Iran and Russia.

The envisioned agreement with Russia is being compared with a 25-year Iran-China agreement. The details of the China agreement are still unclear and it is not yet in the implementation stage.

The nuclear negotiations in Vienna, Austria to restore the JCPOA are continuing. While there have been heightened expectations for a deal, the U.S. and its allies maintain that the talks are moving too slowly.

U.S. President Joe Biden said in a press conference that it is “not time to give up” on the negotiations. He added that “there is some progress being made.”

The U.S. envoy at the talks Rob Malley said on January 20th: “There is only a little time to reach and implement an understanding before developments in Iran’s nuclear program foreclose the possibility.”

The Wall Street Journal reported the U.S. is exploring ideas to satisfy Iran’s demand that the U.S. guarantee it will stick to the deal. The WSJ stated: “Ideas that are being weighed are promises of letters of assurance from the U.S. Treasury Department for an agreed list of international banks and companies or a political commitment to some kind of phase-in of future sanctions.”

A source close to Iran’s delegation in Vienna said the talks are “entering the most difficult phase on key issues.” The source added that “many differences (open brackets) on sanctions lifting have been resolved” and the negotiations are “increasingly focused on the sequencing [of the steps each side has to take to return to JCPOA compliance].”

The conservative Iranian newspaper Farhikhtegan also cited a source as saying there has been agreement in Vienna on a longer process to verify sanctions relief for Iran. The source says the Western parties in Vienna agreed on specifying 10 days on which certain mutual steps to return to compliance will be taken. The source says on each of these days, each side will implement a set of actions as part of a step-by-step process (to return to JCPOA compliance).

The source also says Iran seeks four types of guarantees from the U.S. on the JCPOA. This includes Iran preserving its nuclear achievements, which the source explains as meaning that Iran put its advanced centrifuges under joint IAEA-Iran supervision and not destroy them. Iran also seeks legal and political guarantees from the U.S. that it will stick to the JCPOA and the U.S. The Treasury notifies companies that they can do business with Iran for 4-6 years, with or without the JCPOA.

Prominent Iranian political prisoner and human rights activist Narges Mohammadi has been transferred from Tehran’s Evin prison to Qarchak prison. According to her husband, she was held in solitary confinement for two months at Evin and was not allowed to contact her family.

Mohammadi was arrested again in November after attending a demonstration commemorating the countrywide November 2019 protests. A previous issue of Iran Unfiltered discusses her rearrest.

Meanwhile, Keyvan Samimi, a 73-year-old journalist, was also transferred from Evin to Rajaei-Shahr prison. He was imprisoned previously for five years and was arrested again after writing a letter about the death of writer Baktash Abtin.