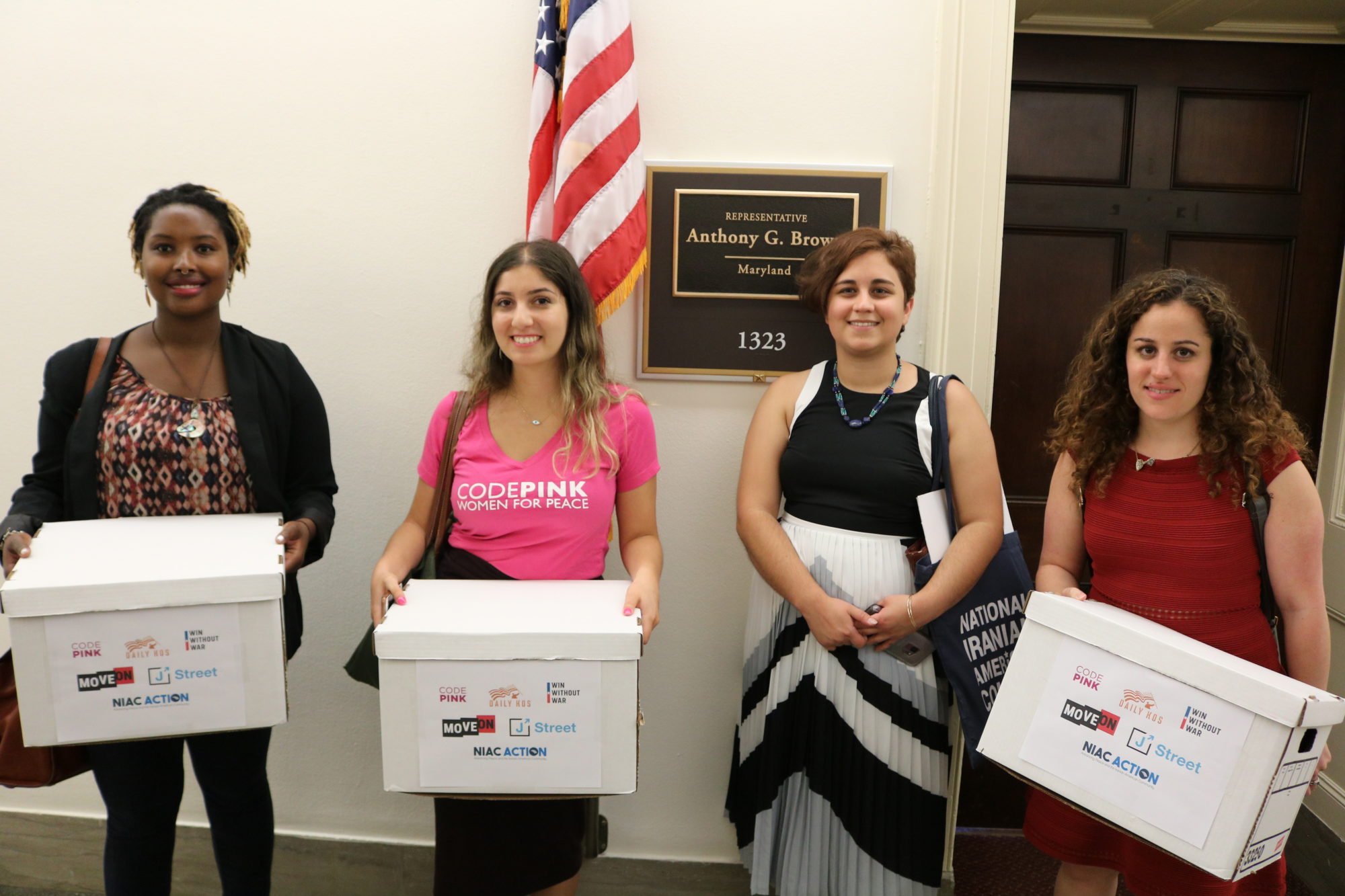 Washington D.C. – Today, NIAC Action, Win Without War, MoveOn, J Street, Daily Kos, and CODEPINK delivered 249,000 petition signatures to the House Armed Services Committee members ahead of tomorrow’s National Defense Authorization Act (NDAA) markup. The organizations called for the addition of an amendment to the NDAA that would prevent funding for a war with Iran without Congressional approval.

“Make no mistake, the Trump administration’s decision to exit the Iran deal and re-impose sanctions has brought the U.S. closer to war with Iran,” said Donna Farvard, NIAC Action Organizing Director. “Congress must set up legal barriers to block Trump’s ability to start another disastrous war in the Middle East.”

“Donald Trump and his War Cabinet led by John Bolton have taken us closer to war with Iran than we’ve ever been. After nearly two decades of disastrous military misadventures in the Middle East, only a fool would think a war with Iran would be anything but catastrophic. The Trump administration’s march to war is a five-alarm fire that Congress needs to put out as soon as possible,” said Stephen Miles, Director at Win Without War.

“Before we wake up to find that Trump has declared war on a sovereign nation via Twitter, it is time for Congress to go on the record and act to prevent a war with Iran,” explained Iram Ali, Campaign Director at MoveOn. “It was Congress, after all, that passed the hard-fought multilateral Iran Deal—a historic, bipartisan win for diplomacy between Iran and the United States. By walking away from the Iran Deal, increasing sanctions, and being belligerent in their rhetoric and actions, Trump and his administration are intentionally manufacturing a military confrontation with Iran that we can not afford.”

“Pro-Israel, pro-peace Americans want to see Congress do everything in its power to make clear that the president has no authorization to use military force against Iran,” said J Street President Jeremy Ben-Ami. “If the Trump administration does launch a new war of choice with Iran it will have disastrous consequences for the region, for US interests and for the American people.”

“The last thing this country needs is to enter yet another costly war that will lead to thousands more senseless deaths. Daily Kos calls on Congress to speak up and push back against Trump’s violent and dangerous rhetoric concerning Iran,” said Daily Kos Communications Director Carolyn Fiddler.

“While the Trump administration is building a case for war with Iran, the international community is desperately trying to save the JCPOA and dial down the conflict. It’s time for the Trump administration to listen to American people, the Iranians and the world community. All want to find a peaceful resolution and prevent another disastrous war in the Middle East,” said Lily Tajaddini, Iran Campaign Coordinator at CODEPINK.