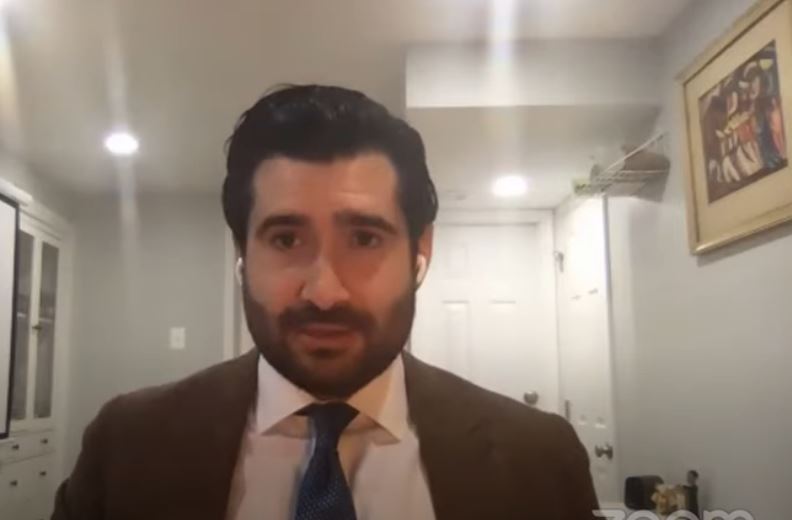 “The Trump administration broke the international consensus around Iran that took years to build,” said Suzanne DiMaggio, senior fellow at Carnegie Endowment for International Peace. “I think this will go down as an epic strategic blunder during the Trump Era.” DiMaggio was speaking on NIAC’s recent panel examining current and future U.S. policy toward Iran, entitled “A Maximum Pressure Exit Strategy: Can the U.S. Save the Iran Nuclear Deal Before it’s Too Late?” Joining DiMaggio as panelists were Jamal Abdi, President of NIAC, and Joe Cirincione, President of the Ploughshares Fund. Sanam Shantyaei, Senior Journalist at France 24, led the panel as moderator.

The discussion closely examined NIAC’s latest report, which was released on the same day, titled “Returning to and Building on the Iran Nuclear Deal: A ‘Maximum Pressure’ Exit Strategy.” Cirincione gave high praise for the new report, calling it “clearly written” and a representation of the “path forward” for “how to avoid a new war with Iran and restore constraints on Iran’s nuclear program.”

The panelists noted that despite the many mistakes of the Trump administration, and Iran’s responses of noncompliance, the JCPOA has remained remarkably resilient. Cirincione called this resilience “a testament to the brilliant architecture of the agreement, and to the strength of its logic.” As Abdi said, “Even after 2018 when he [Trump] left the deal, even after the assassination of Soleimani, at all these various points, a lot of us thought, ‘Ok, this is it. Iran is going to back out.’” But Abdi said he was, “very pleasantly surprised by the fact that we are just five months away from the election and the JCPOA is very much still in play.”

Despite the resilience of the JCPOA, the panelists noted that many serious challenges lay ahead. Firstly, Trump may use the last five months of his presidency to respond to his failed strategy with more threatening policies and even war. As DiMaggio warned, the next few months will be “contentious.” In response to the Trump administration’s failed policies towards Iran, “Will they try to ignite some sort of conflict in the region? Draw Iran in that conflict? We just don’t know.”

On the other hand, Abdi talked about the second challenge of rebuilding Iranians’ trust and support for the JCPOA. Over time, the “overwhelming” support for the JCPOA and President Rouhani in Iran has “crumbled” due to a lack of “confidence that the United States will actually uphold the terms of any agreement.” But, “that doesn’t mean that Iranians don’t support the concept of this agreement.” Abdi asserted that the JCPOA is good for the people of Iran, its economy, and “real and substantive change” inside the country. Moving forward, Abdi said the U.S. needs to recognize the damage it has caused and begin to rebuild the relationship that this deal initially created with Iran. While all three speakers were pessimistic that the Trump administration could rebuild this relationship, they have hope for a potential Biden administration.

If Biden takes office in 2021, the report and panelists agreed that one of the administration’s first actions should be to get back into the JCPOA. While some have suggested that sanctions may have given the U.S. added leverage to demand additional concessions from Iran before returning to the deal, Cirincione strongly disputed that, saying “We don’t need leverage for talks with Iran.” That concept “fundamentally misunderstands the situation… Once we’re in the deal, that’s when we get leverage. That’s when we can get Iran to come back in. That’s when we reunite the coalition that was able to achieve the deal in the first place.” Similarly, Abdi noted that Biden has been strong in his statements about rejoining the JCPOA, but warned, “the devil’s in the details. It would be a big mistake to try to get more from Iran, or renegotiate terms, before the U.S. returns to compliance.” Abdi argued that we should be focusing on providing Iran with incentives, rather than imposing sanctions that harm the Iranian people and create a relationship of hostility. The panelists urged the Biden Administration to focus on immeditely returning to the deal and signaling a new approach to build trust, such as eliminating discriminatory policies like the Muslim ban.

DiMaggio noted that returning to the JCPOA “would create opening for broader dialogue, specifically in the [Middle East] region.” The report lays out an ambitious path for the U.S. to pursue after a JCPOA return, including a joint communique that would outline bilateral and multilateral negotiating tracks on issues of mutual concern – including regional security, trust-building measures and human rights. But, all of this rests on ending the maximum pressure campaign and rejoining the JCPOA. Abdi concluded the panel by saying he is, “excited about the prospect of what can actually be discussed with Iran… As soon as we can get off this track of destruction, there is endless opportunity. But we have to do it right and there has to be this leadership and political will to make it happen, and I hope that that’s the case.”