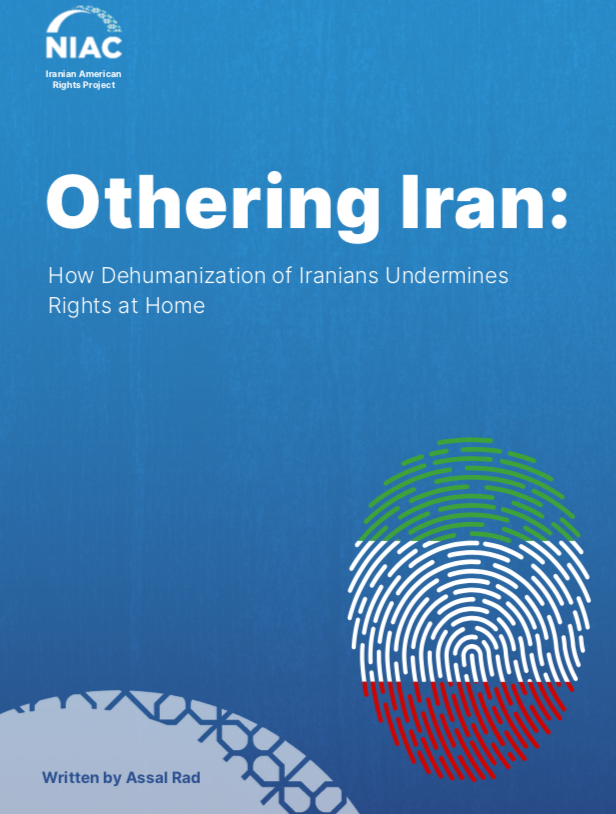 Othering Iran: How Dehumanization of Iranians Undermines Rights at Home

View full version of the report ➤

>> After reading the report, take action by telling President Biden and Congress to protect the rights of Iranian Americans.

The systematic demonization of Iran, and by extension Iranian people and those of Iranian heritage, is so prevalent in U.S. political discourse that it permeates American society and popular culture as well. This process has not only led to the dehumanization of an entire group of people, but it also informs U.S. policy positions on Iran.

The real-life consequences of these policies are evident in the discriminatory closures of Iranian-American bank accounts, the freezing of transactional accounts simply for using words like “Iran” or “Persian,” immigration policies that prevent family members from Iran to visit their Iranian-American family, discriminatory questions when entering the United States as a U.S. person, and an overall sense of hostility that has been experienced in numerous ways. Additionally, the collective punishment of sanctions and fear of possible war with Iran impacts Iranian Americans by hurting their families who still reside in Iran.

This report provides an overview of the history of U.S.-Iran relations—especially the historical backdrop of their mutual grievances and ongoing hostilities—as well as a historical picture of the U.S. narrative on Iran, which has been shaped over the last four decades with the consistent demonization of Iran and, as a result, Iranians themselves.

Drawing from primary sources as well as personal testimonies from the Iranian-American community, this report collects these sources in one place to understand the weight and ubiquity of harmful discourse on Iran, as well as looking at how it has impacted the community. Finally, the report will provide policy recommendations to address how to improve the current situation, ensure equal treatment for Iranian Americans in the United States, and enact policies based on facts on the ground rather than zealous hostility.

The below report explains how the dehumanization of Iranians undermines U.S. policy objectives and hurts the Iranian-American community at home, and outlines recommendations to improve the current state of affairs.