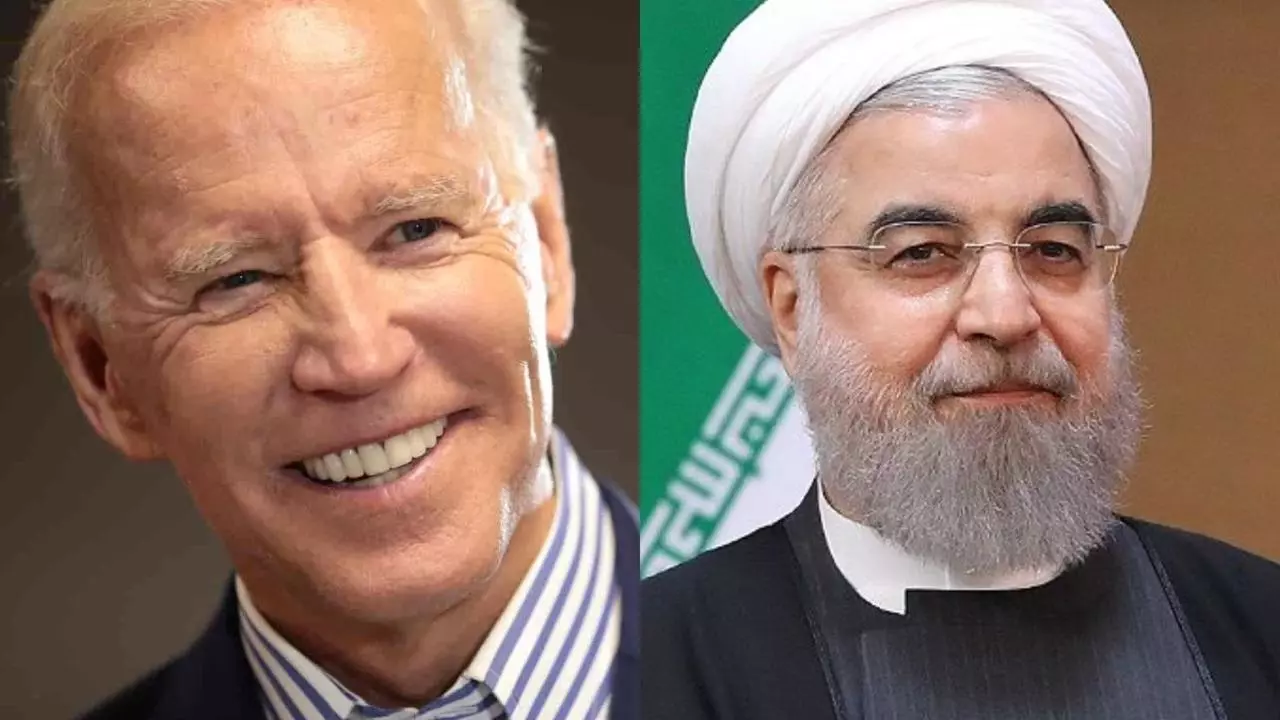 Officials Talk About a JCPOA Return with Biden

Rouhani held his weekly cabinet meeting hours before President Joe Biden’s inauguration ceremony.  Rouhani talked about the Trump era and returning to the JCPOA, among other issues.

Rouhani said Trump’s main legacy was increasing “polarization in American society.” Rouhani stated: “Now we see on Wednesday which is the day of the inauguration of the new president, Washington has become a military base and all these military troops have come to secure the city. These are the fruits of Trump’s authoritarian and clumsy works which have created this polarization in American society.”

Rouhani said another Trump legacy was “America’s political isolation” internationally. He stated: “He [Trump] faced defeat with the JCPOA and with cases that came after against Iran and against UNSC Res. 2231. When he came to prevent the [conventional arms] sanctions being lifted, he failed. He failed when he tried to in his own words impose snapback [of UN sanctions]. He failed when he came to the UN General Assembly and tried to maintain sanctions committees. On multiple fronts, America officially came to the arena, gave official proposals, rounded up others, overturned the world, went here and there to get votes, and failed.”

Rouhani said it will take “time” for the U.S. to “destroy Trump’s legacies.” He talked about “global distrust in America and its signature, commitments, and governmental terrorism.”

Rouhani again condemned the U.S. for the assassination of Iranian Gen. Qassem Soleimani. He stated: “Until now we had not seen that in America a president explicitly admits that he assassinated a great military commander of another country in a [third] country where he was a guest. He then officially announces this and says I gave the assassination order. We saw a stupid terrorist in history. Governmental terrorism hit the White House’s forehead and Trump did this.”

Rouhani added in this regard: “Today was the end of this life and the administration of this person [Trump] and it will even be the end of this man’s political life. A person for all these four years was oppressive and aggressive, trampled on laws and norms, and trampled on [U.S.] obligations.”

Rouhani said that Trump’s “maximum pressure” policies failed and Iran’s oil and non-oil exports have recovered significantly. He stated: “For exports of oil and oil products our situation today is far better than previous months and is going down the correct path. This means the complete defeat of this policy [maximum pressure].”

Rouhani said Trump did not “understand politics.” He said Trump saw everything through the lens of being a “high-rise builder,” but that the Biden teams “know politics.”

Rouhani then talked about the Biden administration and returning to the JCPOA. He stated: “Today, our expectation of those who are taking power in the White House is that they return to law and their commitments and make efforts, if they can.”

Rouhani added: “In the next four years, they should make efforts to erase all the black stains of the previous four years, if it is cleanable. Some of these stains will remain forever in history and are not erasable. They are going to have a heavy job on their shoulders. They have to return to law and their commitments, to international rules, to resolutions, to resolution 2231.”

Rouhani said Iran would take proportionate steps in response to U.S. moves to return to the JCPOA. He stated: “If they [the Biden administration] sign something in relation to UNSC Res. 2231, in response they will see a signature from Iran and nothing more. If they execute an order, in response in Iran they will see an order and nothing more. If they impactfully implement their commitments, they should know that this side will impactfully implement all its commitments.”

Rouhani said that if the Biden administration acts with sincerity, “issues [between the U.S. and Iran] can be resolved very quickly.”

Rouhani said the “hardliners” in “America, Israel, and Saudi Arabia” all sought to destroy the JCPOA. He said the JCPOA today is “alive and livelier than yesterday.”

Zarif Responds to Biden Nominees on a JCPOA Return

Blinken said before the Senate Foreign Relations Committee that “if Iran comes back into compliance, we would too.” Blinken said the U.S. would then use the JCPOA “as a platform” to “seek a longer and stronger agreement with Iran,” and that a new agreement could address Iran’s “destabilizing activities” in the region as well as its missiles. He added that “I think we’re a long way from there.”

Zarif emphasized recent remarks by Ayatollah Khamenei that “Iran is not in a hurry” for a JCPOA return but remains committed to the deal. Zarif said that “if sanctions are lifted and the Europeans abide by their commitments, we will also completely abide by our commitments.”

Zarif said Iran does not seek to “extort” anyone nor will it be “extorted.” He said Iran is not seeking the “extortion” of the U.S. government, just a “signature” that it will abide by its JCPOA commitments. He stated: “We have to see how much they are willing to abide by their commitments.”

Zarif added in this regard: “The Americans have always had this idea that what is mine is mine and what is yours can be negotiated over. They must put this aside.”

Zarif said U.S.-Iran disputes over the region and Iran’s missile program were intentionally not part of the JCPOA negotiations. Zarif said Iran was not willing to talk about them and as such, was willing to “pay the cost” of only agreeing that UN limitations on its conventional arms be extended by five years and on its missiles by eight years as part of the JCPOA.

Zarif said the “problem” in the Middle East is not Iran but the weapons the U.S. and its allies export to the region. He stated: “If France or America want to talk about the situation with weapons in the region, they must first stop selling 25 percent of the world’s weapons to this region and then talk about this issue. I doubt that the people who sell $100 billion in arms to the region, which are dropped on the Yemeni and Palestinian people, will stop these inhumane sales and will then talk [about this issue].”

Zarif said Biden must remove “all” the sanctions that Trump imposed on Iran for a JCPOA return. He stated: “Today it is clear that Trump reinstated some sanctions and imposed new ones. The responsibility of Biden is to lift these sanctions. If these sanctions are lifted, we will return to our commitments just as the Leader and the president have said.”

Zarif stated in this regard: “The explicit meaning is that the sanctions must be lifted and removed. The sanctions, the names, the branch types [of sanctions] that Trump added, all of these must be lifted. It cannot be that they [Biden’s team] come and say that in article such and such of the JCPOA that this or that law must be reinstated.”

Zarif added that the U.S. must “head in the direction” of sanctions removal, stating: “This issue must be solved and head in the direction of being implemented. In this case, Iran will return to all its actions [under the deal]. How and on what timetable this happens is a technical matter and it will definitely happen.”

Zarif further stated: “As soon as American carries out its commitments and we see the results of this, meaning it lifted the sanctions, we will also abide by our commitments.”

Zarif said Iran does not seek a “signature” from the U.S., but “action” and “results.” He stated: “It was the same last time and this time we also seek action. In the JCPOA itself it states that results must be seen and not just a signature … our friends inside the country and the foreign sides should study appendix number two of the JCPOA. Here it clearly states that the results are important. Today, we are also seeking results. If we witness results, we will also be committed to our obligations.”

Foreign Minister Javad Zarif testified before the Iranian parliament. Conservative parliamentarians grilled him on his support for negotiations with the U.S. and what they said was his lack of focus on economic issues in foreign policy. The parliamentarians voted to give him two “yellow cards” on these issues, which is a symbolic measure. However, parliament does have the power to impeach Zarif with a majority vote.

Zarif said to parliament that his foreign policy is based on the positions of Ayatollah Khamenei. Zarif said that Khamenei declared last week that Iran is “not in a hurry for America to return to the JCPOA.” Zarif said Khamenei does not believe that the JCPOA “smells spoiled” or has “been buried.”

Zarif said that according to Khamenei, if America “implements its commitments and lifts sanctions, it can then sit as part of the P5+1 framework.” Zarif said this is the basis for Iran’s position on a JCPOA return.

Zarif said that during the JCPOA negotiations, at one point he prayed before then-U.S. Secretary of State John Kerry.  Zarif said he did this to show to Kerry that “God was the top power, not you.”

NBC news reports that Iranian American Emad Sharghi has been detained in Iran. According to Sharghi’s family, he was sentenced to 10 years in prison on November 30th “without a trial on charges of espionage.”

Sharghi’s family has told NBC that they have not heard from him in more than six weeks. His family says they do not know where Sharghi is being imprisoned and “just pray for his health and safety.”

Sharghi worked for an Iranian investment company called Sarava Holding. Sarava said in a press release that Sharghi worked for them from May 2017 to April 2018, and that judicial authorities told them the case against him has nothing to do with the company.

However, the date Sarava gives for when Sharghi stopped working there is the same date that he was first reportedly arrested. NBC news states: “Shargi was first arrested in April 2018 and held at Evin Prison in Tehran until December 2018, when he was released on bail.”

Currently, three other Iranian Americans are known to be detained inside Iran. Siamak Namazi has been in prison since 2015 and his father Baquer Namazi, while on medical furlough, is not allowed to leave the country. Environmentalist Morad Tahbaz is also currently in prison.

NBC news notes that Sharghi was arrested again shortly after Biden’s election. It states: “Hard-line elements in Iran, which have remained skeptical of diplomatic overtures to Washington, have backed provocative actions in the past, including the imprisonment of foreign nationals, to undermine any rapprochement with the West.” Read NIAC’s Human Rights Tracker post on the case of Emad Sharghi here.