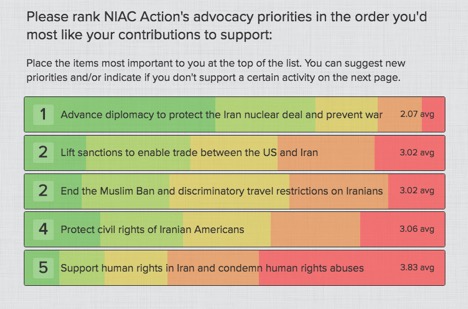 NIAC’s annual survey of over 1,000 of its donors and supporters reveal a community that is increasingly impacted by discrimination and which remains committed to advocating for diplomacy and preventing war and reversing Donald Trump’s Muslim ban.

Concerns of War and a Permanent Muslim Ban

Two-thirds of respondents are concerned that the U.S. may go to war with Iran under the Trump administration. Of even greater concern is the possibility that the courts may reinstate the Muslim Ban and permanently ban Iranians, with 72% of respondents indicating that they are ‘very concerned.’

Advancing diplomacy with Iran to protect the nuclear deal and avoid armed conflict was ranked as the highest advocacy priority by supporters, followed by seeking an end to the Muslim Ban. Protecting civil rights was ranked as the third priority, followed by lifting sanctions to enable US-Iran trade, and supporting human rights in Iran. These priorities reflect those of past surveys with the notable and unfortunate addition of the Muslim Ban.

Respondents said they would like to see NIAC Action continue to   support political candidates who are committed to advancing Iranian-American interests: 45% prioritized helping to get Iranian Americans elected to Congress; 43% prioritized helping Democrats retake Congress in 2018; and 29% would like to work with NIAC Action to donate to candidates who will work with our community on issues like protecting the Iran deal and ending the Muslim ban.

NIAC surveys its donors and supporters to set its advocacy priorities for the current year. The results of past surveys have consistently mirrored the views of the majority of Iranian Americans, as expressed in statistical surveys of the broader Iranian-American community conducted by universities and professional pollsters.

We wish to thank all those who took part in this year’s survey. Your participation ensures that our community is unified as we move forward to tackle the most pressing issues confronting Iranian Americans. We look forward to working together to accomplish our goals and increase our community’s political influence in the years to come.