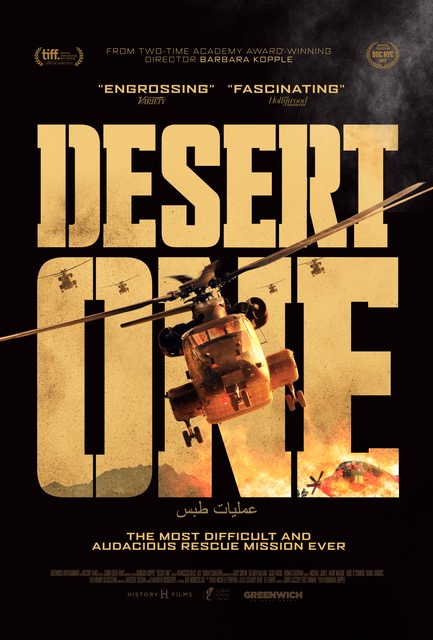 We’re pleased to offer NIAC members the opportunity to rent a new riveting documentary film, Desert One, ahead of its general release date! The film opens up an important dialogue to discuss the history of U.S.-Iran relations, see our review below and join us August 31st, 4 pm EST for a panel discussion with the director, award winning filmmaker Barbara Kopple, Ambassador John Limbert who was among the 52 Americans held in Tehran, and Captain Ishimoto who served as an intelligence officer for Operation Eagle Claw. Watch the trailer here.

When Iranian students seized the U.S. embassy on November 4th, 1979, they changed the course of U.S.-Iran relations and U.S. foreign policy for decades to come. The consequences of that rupture are still a part of U.S. political discourse, as evident in tweets by President Trump threatening to bomb 52 Iranian cultural sites in January of 2020. One site for each American held hostage in 1979. Despite its significance, much of the history of that moment is often neglected.

In the documentary film, Desert One, some of that history is reconstructed, with rare interviews from both American and Iranian participants in the events. While the film primarily focuses on Operation Eagle Claw—a covert op ordered by then U.S. president, Jimmy Carter, to rescue the 52 Americans held hostage—it also sheds some light on the circumstances that preceded the embassy seizure on that fateful day in November.

With some background into the Iranian Revolution of 1979, the film provides needed context showing the dictatorial nature of the Shah’s monarchy, his human rights abuses, and the outrage of Iranians when he was allowed entrance into the United States for medical treatment in October of 1979. In fact, Ambassador John Limbert, a veteran U.S. diplomat and one of the 52 hostages taken at the embassy, notes in the film that when he joined the foreign service before the revolution and was asked to take a post in Iran, he declined because he “thought our policies, we were too close to the Shah, and under the Shah Iran was a dictatorship. The Shah was seen as an American puppet, doing what the Americans wanted to do.”

It is noteworthy that the United States did not end its diplomatic ties with Iran in the wake of the revolution, which had taken place in February of that year. Instead, as the film shows, the U.S. government called on its experienced Persian-speaking diplomats to serve in the Tehran embassy, one of which included Dr. Limbert. Diplomatic ties between the two states were severed months later, after the events of November of 1979, when the Shah was allowed entrance into the U.S. and Iranian students stormed the embassy.

As the film indicates, Iranians feared the Shah would be forced back in power by the United States. The 1953 coup, which ousted popular national figure, Prime Minister Mossadeq, and reinstated the Shah’s rule, was not a distant memory for Iranians. Much like how the embassy seizure of 1979 has colored the view of Americans on Iran, the coup of 1953 laid the groundwork for Iranian mistrust of the United States. When students took the embassy, just two weeks after the Shah was allowed into the U.S., their demand was the return of the Shah to Iran to stand trial for his crimes.

After prefacing with this background, the film delves into a detailed narrative of Operation Eagle Claw, unearthing incredible footage, never before heard tapes and archives, and interviews with the highest U.S. officials to tell the story of an American rescue mission that ended in tragedy. A moving dedication to the men who lost their lives in the mission, Desert One is certainly a captivating tale. And while the storytellers went to great lengths to incorporate Iranian participants and viewpoints in their story, it is clearly an American history documentary and largely tells the story from the perspective of American diplomats, military, and political figures.

At the same time, it also tries to provide the vantage point of Iranians, including interviews with some of the students involved in the embassy seizure and explaining the deep hatred of many Iranians for the Shah. There is a great deal of fascinating Iranian protest footage that, perhaps, could have been better contextualized by talking to more ordinary Iranians. However, the film also shows the fervor and bigotry in the U.S. with scenes of Iranian Americans being physically assaulted.