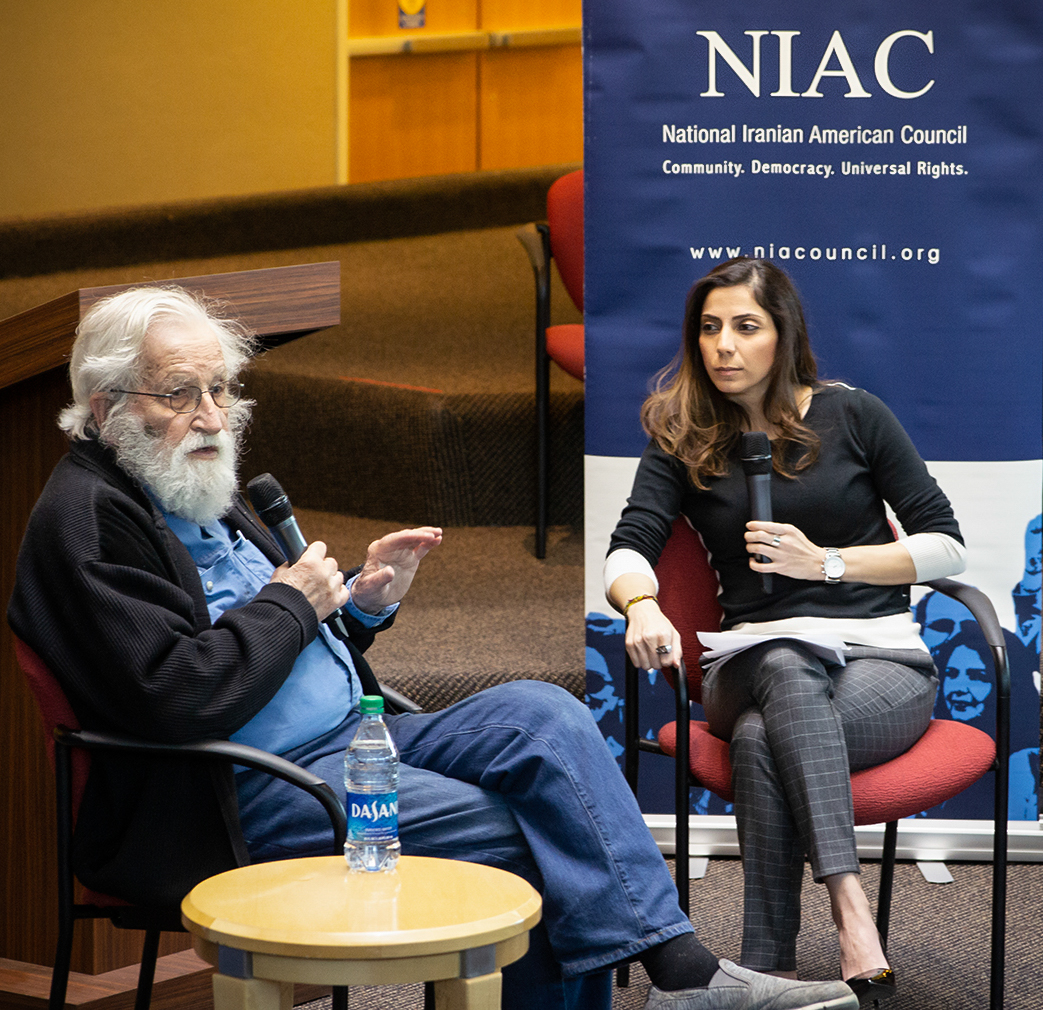 NIAC in Conversation with Noam Chomsky

NIAC Research Fellow, Dr. Assal Rad sat down to have a conversation with world-renowned linguist and activist Professor Noam Chomsky, at the University of Arizona, where he is currently Laureate Professor of Linguistics and Agnese Nelms Haury Chair.

With decades of experience as a writer, researcher, and antiwar activist, Professor Chomsky has added a crucial voice to the U.S. anti-interventionist camp and become one of the most preeminent political philosophers of the modern age. One of the most cited authors in history, Chomsky offers not only human and moral arguments critical of U.S. foreign policy, but also a well-reasoned approach based on analysis of a long history and consequences of said policies.

While the discussion focused on U.S. foreign policy, endless wars, and the Middle East in order to paint a clearer picture of U.S.-Iran relations, the conversation also looked at a possible path forward and the role citizens can play in our government’s policy decisions. As Professor Chomsky highlighted, who we elect into office and how we educate ourselves on these topics is vitally important.

In fact, in a democracy, there are ample things that we can do to be active participants and hold our government to account, starting with voting. On that note the first question raised was about 2020 elections, and their significance as compared to elections of the past. Professor Chomsky stunningly stated that the 2020 elections will be “the most important election in human history.”

With existential threats such as nuclear proliferation and climate change looming large, we find ourselves in a critical historical moment–and as the most powerful country in the world, Americans are uniquely positioned to positively impact the future. What is at stake is not only the future of our nation, but the fate of the world in how we address these key issues.

As Chomsky noted, the Iran nuclear deal was a good starting point for non-proliferation and a first step in making the Middle East a nuclear free zone. However, the United States has often undermined this process and none more so than the current administration. Maintaining his antiwar stance, Chomsky was clear that while the Iranian regime is certainly authoritarian and represses its own people, U.S. policies have only exacerbated those issues and handed victories to Iran’s most right leaning hardliners. Thus, Chomsky noted, it is imperative to look beyond the surface of U.S. rhetoric and find solutions that prevent wars that will further exacerbate the suffering of the region, waste precious resources, and make the world less secure.

Watch a video of the full discussion here.