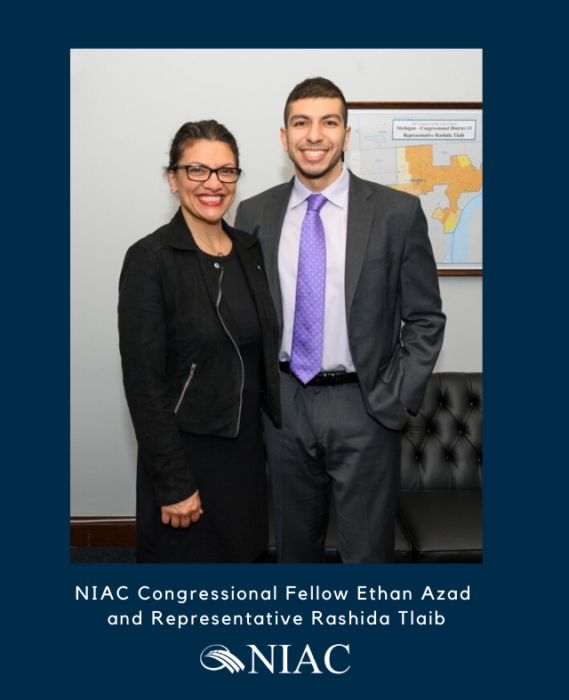 “Get involved,” encouraged Ethan Azad – the National Iranian American Council’s Ali Youssefi Congressional Fellow – “and don’t wait for people to make the changes that you want to see in the world happen because there’s less of those people than you’d expect.”

Ethan is currently working in the office of Rep. Rashida Tlaib (D-MI) as part of NIAC’s revitalized Congressional Fellowship, named in honor of NIAC’s former board chair Ali Youssefi. A UC San Diego grad, Ethan got his first experience in Washington as an intern for NIAC in the spring of this year. The Congressional fellowship is designed to provide young Iranian Americans the opportunity to learn the legislative process and start a career in public service by working on Capitol Hill.

Ethan sat down with NIAC staff to share his experience thus far, as he is roughly halfway through his four-month fellowship with Rep. Tlaib.

On representing the Iranian-American community, Ethan said “The pressure’s high, because there’s not many of us there, so you want to do great. You want to make sure that you’re representing the Iranian-American community in a positive light, which isn’t difficult when you’re there fighting for issues that you actually believe in and for the rights of ordinary people.

“You don’t see much of us (Iranian Americans) around there. There’s a few of us, but we work together well and collaborate all the time.” Ethan credits fellow Iranian American staffers on the Hill with helping him learn the ropes when he was first getting started.

As part of the fellowship, Ethan has handled a broad legislative portfolio, helping Rep. Tlaib’s office on foreign affairs, trade, financial services, firearms and government oversight. A significant portion of his work has been on the forthcoming expiration of sections of the Patriot Act in December, which provides an opportunity to ensure greater protections for communities of color impacted by unconstitutional mass surveillance.

Ethan recounted how he had “double take” moments stepping into elevators with prominent legislators his first week, which is now a common occurrence as part of his fellowship. He’s also helped Rep. Tlaib prepare the questioning of key members of the Trump administration on issues that are critical for the Congresswoman’s Detroit constituents, like housing finance and access to affordable housing.

“Working for Rashida is amazing,” said Ethan. “I’m just so fortunate to be in her office. She is one of the most courageous members of Congress. She has no fear. She is ready to take a stand for her constituents.” Ethan went on to describe her as “a hero” for her fearlessness in voicing her constituents’ concerns in the halls of Capitol Hill.

He also credits Rep. Tlaib’s staff with a warm welcome. “The staff has been incredibly welcoming and friendly. It’s been so educational to work alongside them in their efforts as well.”

Rep. Tlaib credits Ethan with invaluable contributions to her work. “It’s not easy to hit the ground running with committee hearings, vote recommendations, and the like, but Ethan has done so from day one with the utmost grace and eagerness, “ she said.

“That, coupled with the quality of his work, makes me so excited for the remainder of his tenure with us and for his future well beyond it—it’s certainly a bright one,” Rep. Tlaib added.

Ethan also had high praise for NIAC and its fellowship program. “I recommend NIAC’s internship, fellowships and all of their work without reservation,” he said. He encouraged more members of the community to get involved with NIAC, saying “you guys are essentially the spearhead of a lot of the desires of the Iranian-American community.”

“It’s important for Iranian Americans to get involved in civic life because our voices don’t play as big of a role in making policy that affect all our families here and in Iran,” said Ethan. “So force your way into the door, don’t knock on it,” he advised Iranian Americans who are considering a career in public service.

NIAC plans to continue its Congressional Fellowship program in 2020 and will begin its application process in the New Year.