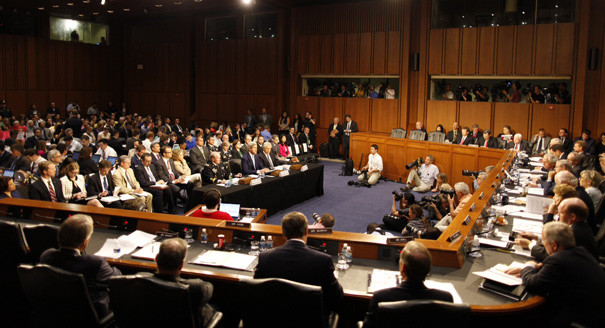 Washington, DC – NIAC Action issued the following statement in response to the Senate Foreign Relations Committee’s mark-up and passage of S. 722, the Countering Iran’s Destabilizing Activities Act of 2017, by an 18-3 vote:

“With a vote for this flawed sanctions bill the Senate Foreign Relations Committee decided to give Donald Trump new tools to kill the Iran deal and stumble into war with Iran. After Iranians overwhelmingly voted for openness and engagement, Senators have effectively endorsed Trump’s calls for a provocative and dangerous approach to the Middle East. NIAC Action condemns this vote and urges the full Senate to abstain from moving the bill forward.

“The only individuals and groups truly happy about this vote today are those that campaigned to kill the Iran nuclear deal. The former Obama administration officials who negotiated the Iran deal came out strongly against this bill and warned that it may violate the nuclear accord. The diplomat most responsible for the Iran nuclear deal, Secretary of State John Kerry – a former chairman of the Senate Foreign Relations Committee – warned yesterday that this is ‘not the time’ for a new Iran sanctions bill, citing the recent election and the bill’s potential impact on the Iran nuclear deal. There is no shortage of former officials who agree with him.

“Neither is there a shortage of sanctions tools available to Donald Trump with respect to Iran. In fact, even after the nuclear deal Iran remains one of the most heavily sanctioned countries in the world, which has limited the economic benefit from the nuclear deal so much that the average Iranian has seen little benefit. Far from constraining Trump, this bill provides the President with additional problematic authorities that he can use to kill the Iran nuclear deal.

“Perhaps the most dangerous part of this bill is its designation of the Islamic Revolutionary Guard Corps (IRGC) as a terrorist organization, which goes against a decade of warnings from the Pentagon that doing so risks endangering U.S. troops in Iraq. It is entirely duplicative from a sanctions standpoint, yet poses a risk of upending the fight against ISIS and sparking an unnecessary conflict with Iran. It is dangerous, foolhardy, and unjustifiable. Yet the committee failed to remove this provision from the bill, only Sens. Tom Udall (D-NM), Rand Paul (R-KY), Jeff Merkley (D-OR) and Chris Murphy (D-CT) voted in favor of removing it.

“It would be the height of folly if, after months of negotiation and public debate and over a year of successful implementation, Congress assists Trump in sabotaging the nuclear deal and putting us back on the path to war with Iran. Yet that is exactly what the committee has done by voting S. 722 out of committee. If followed to the letter this bill is a deal-killer. Senators are abdicating their responsibility and leaving it up to Donald Trump to abstain from using these authorities in a manner that would kill the deal. We hope that the rest of the Senate will choose a wiser course and block this deal-killer from being signed into law by Trump.”