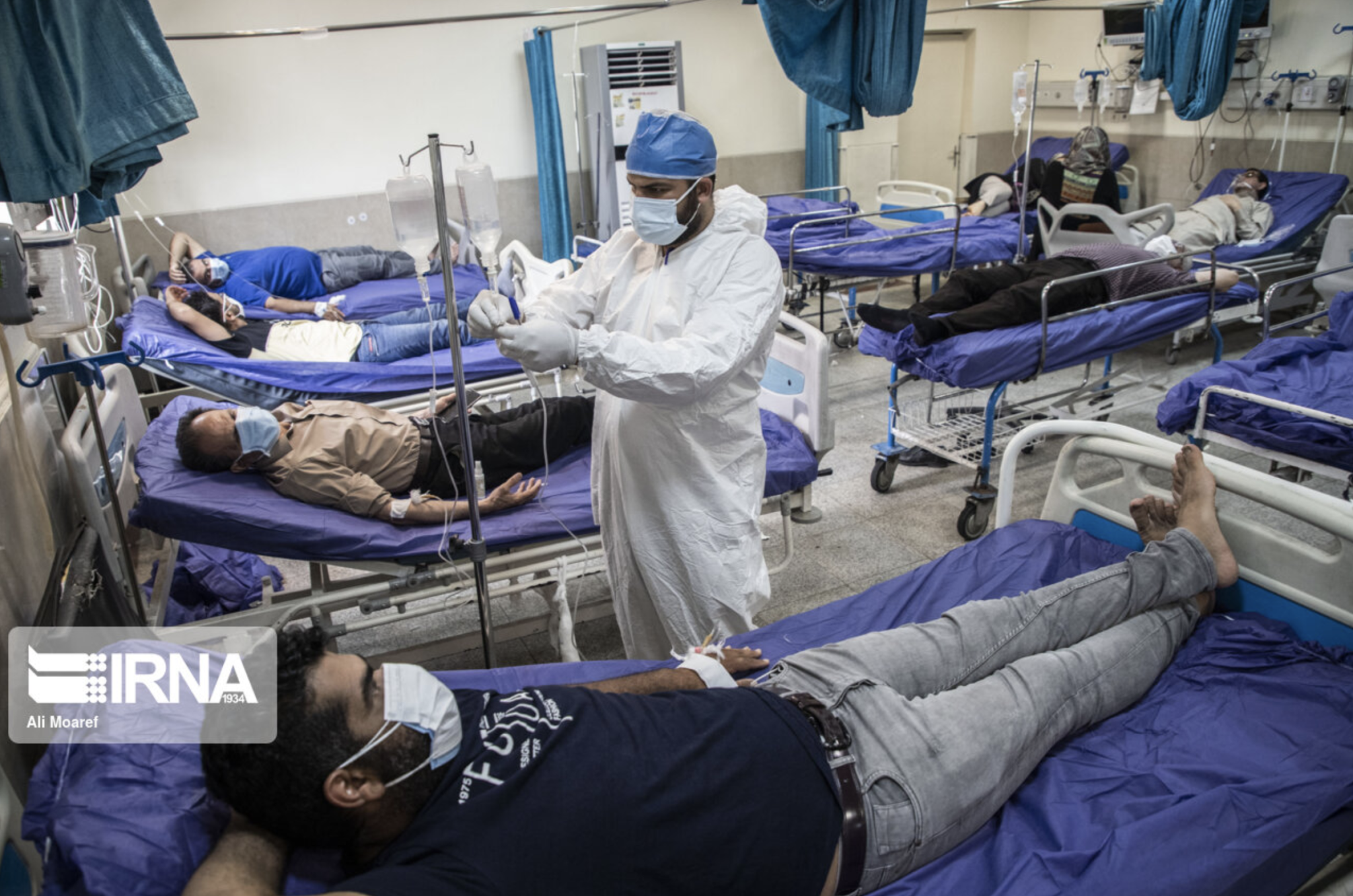 Iran is still in the midst of a devastating fifth wave of the COVID-19 infections and deaths. As of September 1st, over 108,000 are confirmed to have died from COVID-19 according to the Health Ministry. Over the past few weeks, as the Delta variant has hit Iran, between 600-700 have been confirmed as dying from the virus each day.

A new study by BBC Persian has found that since the beginning of the COVID-19 pandemic in Iran until the middle of summer this year, there was an excess of 200,000 deaths in Iran compared to the average amount of deaths for a similar stretch of time in prior years. This death figure is close to what Iranian Health Ministry officials themselves have said is the real death figure of COVID-19 in Iran. Last year, Deputy Health Minister Iraj Harirchi said the real death toll was at least 2 times more than the confirmed deaths.

BBC Persian has cited British statistician David Spiegelhalter as saying this higher number of deaths is not necessarily due to a cover up by the Iranian government. Spiegelhalter states: “When to calculate the number of deaths from COVID-19 it is necessary to have a positive [Covid] test, and there are not many tests done, then these people are not counted as coronavirus deaths. In Britain this happened as well in the first wave of the virus.”

Meanwhile, Nader Tavakoli, an official in Iran’s Headquarters to Confront COVID, has said that the number of deaths is still increasing. He says hospitals in Tehran are also over capacity with COVID patients.

According to the Health Ministry, there have been 5,025,233 confirmed COVID-19 cases in Iran as of September 1st. There have been over 29 million COVID tests carried out, which according to Euro News ranks Iran 9th in the world.

Iran is also ranked fifth in the world, after the U.S., India, Brazil, and Columbia, in terms of COVID-19 patients hospitalized in intensive care units. According to Mehdi Gholian, the Heath Deputy at Mashhad’s University of Medical Sciences, Iran is facing a shortage of ICU beds which will worsen in the coming weeks.

As of September 1st, 19,006,623 Iranians have received 1 dose of a COVID vaccine and 9,085,204, or 10.6% of the population, have received 2 doses. Iran has imported 28 million vaccine doses so far and has started administering its own domestically produced vaccine as well.

According to Mehdi Karimi, the Deputy for Medical Sciences in the city of Abadan, the situation in southwestern Khuzestan province is “warlike” with respect to COVID-19. He says, “only the smell of gunpowder is not inhaled and the color of blood is not seen.”

The new Health Minister Bahram Einollahi has promised that all “targeted” age groups will be vaccinated by February. Einollahi also promised that by October 22nd, 60 million vaccine doses will have been imported.

According to Iranian officials, 67% of the vaccines imported have been the Chinese Sinofarm vaccine. 17 percent have been AstraZeneca vaccine and roughly 10 percent of the vaccines administered in Iran so far have the natively produced Barekat vaccine.

Many of these centers have said they will remain closed “until further notice.”

New Iranian Foreign Minister Hossein Amir Abdollahian attended the summit. He said at the gathering that Iran is ready to “enhance bilateral and regional cooperation.”

Iraqi Prime Minister al-Kadhimi said one aim of the summit was to improve relations between Iran and Saudi Arabia. Saudi Arabia severed diplomatic relations with Iran in 2016 after its diplomatic facilities in Tehran and Mashhad came under attack by angry mobs. This occurred after Saudi Arabia’s execution of prominent dissident Shia cleric Nimr al Nimr and dozens of other Shia political activists.

Prior to the Baghdad summit, Iraq hosted three rounds of direct Iran-Saudi talks, according to Iranian ambassador to Iraq Iraj Masjedi. Masjedi says this diplomatic process was suspended after the Iranian election, to give time for the new Iranian administration to establish itself.

Masjedi said after the Baghdad summit that the next, fourth round of Iran-Saudi talks will occur soon. New Iranian President Ebrahim Raisi has said Iran is open to restarting formal diplomatic relations with Saudi Arabia and reopening their respective embassies.

At the Baghdad summit, Abdollahian praised Iraq for its “constructive role in promoting a culture of dialogue.” He reiterated Iran’s position that U.S. military forces should leave the country, in line with the vote of the Iraqi parliament. He also visited the site where the U.S. assassinated IRGC General Qassem Soleimani in January 2020 and said the “architects” of the “terrorist action” will be brought to “justice.”

Abdollahian also said he talked with the Saudi Foreign Minister at the Baghdad summit. He said the Saudi foreign minister congratulated Iran for the inauguration of the Raisi administration and said Saudi Arabia is eager to start “communications” with Iran once the new administration is established.

Abdollahian also expressed “regret” that Syria was not invited to the Baghdad summit. After the summit, he travelled to Damascus and met with Syrian President Bashar al Assad.

Abdollahian was criticized by many in Iran and in Arab countries for what they say was a gaffe he committed at the summit. At the end of the summit, when the representatives from the various countries gathered for a going away picture, Abdollahian stood in the front row next to several heads of state and not in the back row next to the other foreign ministers. This was widely criticized as disrespectful and a violation of diplomatic protocol. In response, Abdollahian said he “stood in the position which is Iran’s real position.”

Still Unclear When Next Round of JCPOA Talks Will Be

Abdollahian in a television interview rebuked U.S. and European officials for “threats” to end the negotiations and to pursue other “options” against Iran. He said Iran will need “two or three months” before it returns to the negotiations so that the Raisi administration can establish itself. However, according to Amwaj Media, this has been walked back and Iran may return to talks at the end of September.

Abdollahian also said that Iran has not “shrugged off” negotiations and will eventually return to Vienna.

Meanwhile, President Raisi appointed Mohammad Eslami to be the new head of the Atomic Energy Organization of Iran. He will be replacing Ali Akbar Salehi, a nuclear scientist who participated in the JCPOA negotiations.

Eslami is not a nuclear scientist and was not involved in the JCPOA negotiations. His background is in Iran’s defense industries, including posts in the Defense Ministry. He was also former President Rouhani’s minister of Roads and Urban Development.