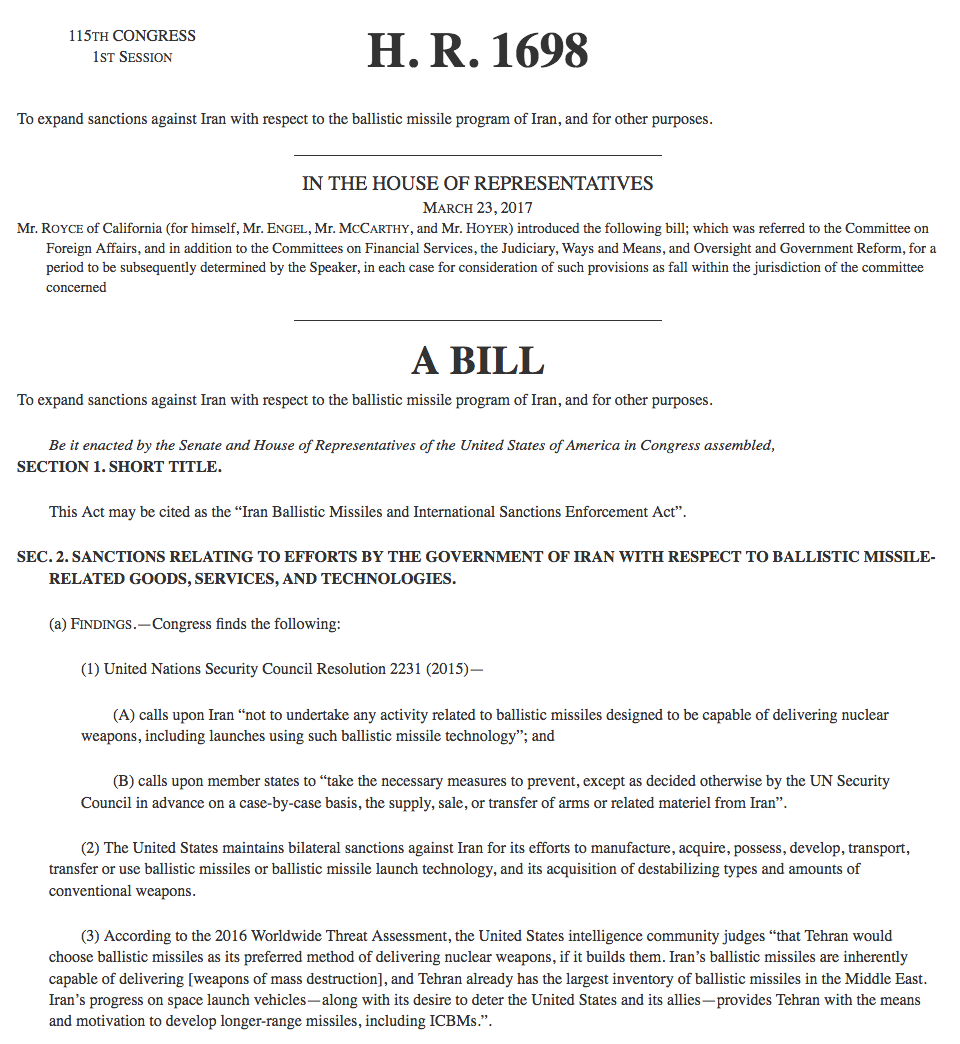 In mandating President Trump utilize new sanctions authorities, the legislation risks incentivizing the Trump administration to engage in aggressive actions towards Iran that could undermine the Joint Comprehensive Plan of Action (JCPOA) – the nuclear accord between the United States, other major world powers, and Iran – all the while setting the stage for conflict between the two countries. Undoing the long-term restrictions on Iran’s nuclear program in service of an aggressive focus on Iran’s ballistic missile program would be in clear contradiction of U.S. interests.

Moreover, the timing of the legislation is inopportune. In less than two months, Iran will hold its presidential election. The imposition of new sanctions on Iran – even for activities not related to Iran’s nuclear program – risks distorting Iran’s domestic politics in favor of hardline candidates. This would broadly undermine U.S. interests by undermining moderate candidates open to engagement with the United States (as evidenced by the recent nuclear agreement) in favor of those who evidence implacable hostility towards Washington.

The bill would also amend § 5(b) of the Iran Sanctions Act to mandate the imposition of sanctions on foreign persons or States if the President determines that the person or State knowingly imports, exports, or re-exports to, into, or from Iran, directly or indirectly, any significant arms or related materiel prohibited by UNSCR 2231.

Finally, the bill would amend § 5(b) of the Iran Sanctions Act by mandating the President to impose sanctions on persons that knowingly export or transfer, or permit or otherwise facilitate the transshipment or re-export of, goods, services, technology, or other items to Iran that materially contribute to Iran’s ability to (1) acquire or develop ballistic missiles or related launch technologies; or (2) acquire or develop destabilizing numbers and types of advanced conventional weapons.

The bill requires the President to submit a report to Congress detailing the foreign and domestic supply chain in Iran that directly or indirectly significantly facilitates, supports, or otherwise aids Iran’s ballistic missile program, as well as an assessment of the Government of Iran’s ability to indigenously manufacture or otherwise produce the goods, services, or technology meant to support its ballistic missile program. Such report shall also include an identification of foreign persons that have directly or indirectly facilitated or supported the development of Iran’s ballistic missile program.  The report shall be submitted to Congress in unclassified form.

Finally, the bill requires the President to submit a report to Congress upon receipt of credible information that Iran has conducted a test of a ballistic missile, detailing whether such test fails to comply with, violates, or is in defiance of UNSCR 2231.  Such report shall also identify Iranian persons responsible for ordering, controlling, or otherwise directing the missile test and determining whether such persons are subject to U.S. sanctions as of the date of the report.  The report shall also contain notice as to the steps that the President is taking to respond to the ballistic missile test.  This report shall also be submitted in unclassified form.