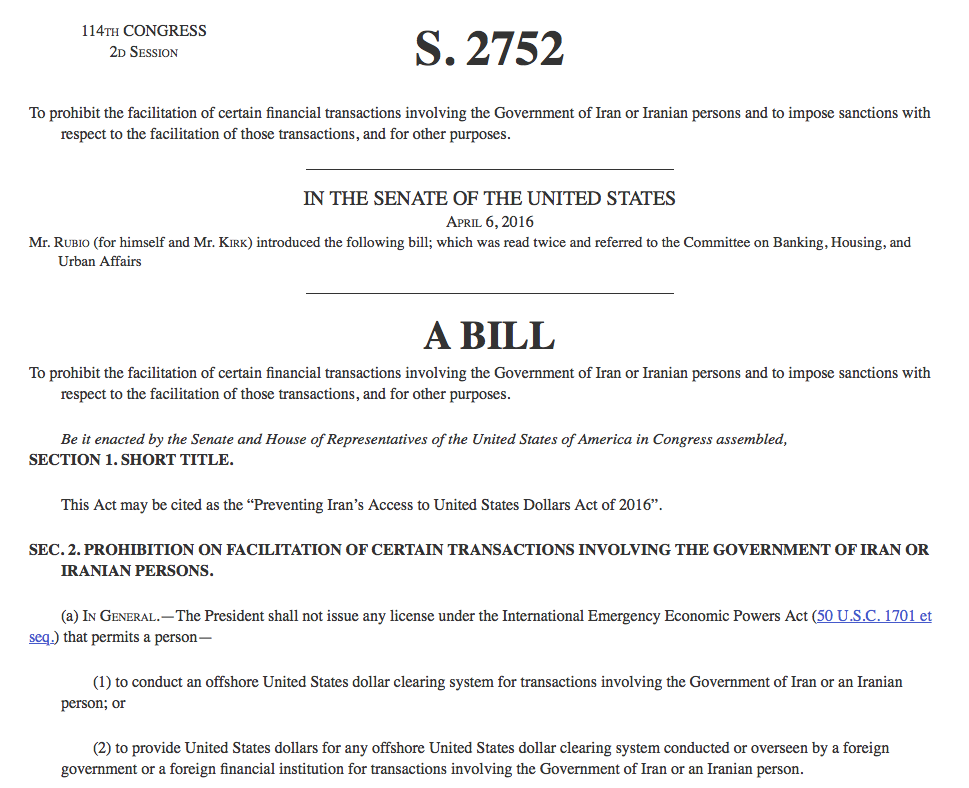 Following news that the Obama administration was considering the issuance of a license in order to facilitate the creation of an offshore dollar clearing system to enable required sanctions relief under the nuclear accord, several Congressional opponents of the Iran deal rushed to block the authorization in a manner that risks violating the accord.

The bill would prohibit the President from issuing license authorization that permits a person:

(1)    to operate an offshore dollar clearing system for transactions involving the Iranian government or an Iranian person; and

(2)    to provide U.S. dollars for any offshore U.S. dollar clearing system conducted or overseen by a foreign Gov’t or a foreign financial institution for transactions involving the Gov’t of Iran or an Iranian person.

The bill would also subject any financial institution operating, or participating in, such a dollar clearing system to blocking sanctions.  Finally, the bill would extend the scope of current blocking sanctions on Iranian banks to include all property that arises from or is ordinarily incident or necessary to the offshore dollar clearing system involving Iran.

This bill would violate the nuclear accord in a number of respects.

This would have the effect of blocking transactions currently allowed under the nuclear accord.  For example, foreign banks are prohibited from clearing U.S. dollar-denominated transactions involving Iran through the U.S. financial system, as U.S. banks are prohibited from providing financial services to Iran.  However, foreign banks are likely not barred from clearing U.S. dollar-denominated transactions involving Iran if such dollar clearing does not touch the United States.  Indeed, the U.S. lifted sanctions related to the provision of U.S. bank notes to the Iranian government by foreign persons, provided that the transaction does not involve a U.S.-designated person or certain prohibited conduct.  While this may not be sufficient to reassure foreign banks to move forward with permissible transactions, by prohibiting such transactions that are currently permitted under U.S. law, S.2752 would be a violation U.S. commitments under the nuclear accord.

This could tie the President’s hands at a time in which he is required to take action to ensure U.S. compliance under the nuclear accord.  Pursuant to § 24 of the JCPOA’s Main Text, the United States may be obligated to lift certain additional nuclear-related sanctions if doing so is required to ensure full implementation of the JCPOA’s sanctions-lifting.  That means that if Iran is not reaping the promised benefits of the sanctions-lifting due to surviving U.S. nuclear-related sanctions, the President may have to lift certain of the surviving sanctions in order to ensure that Iran receives practical value from the nuclear accord.  This bill, though, would effectively tie the President’s hands by preventing him from taking any such action, causing the U.S. to abrogate it commitments.

For these reasons, S.2752 is a deal-killing bill specifically designed to prevent the President from ensuring full U.S. compliance with its obligations under the nuclear accord.  Passage of the legislation would undermine efforts to ensure the U.S. is able to abide by its commitments and the nuclear accord is implemented by all parties.