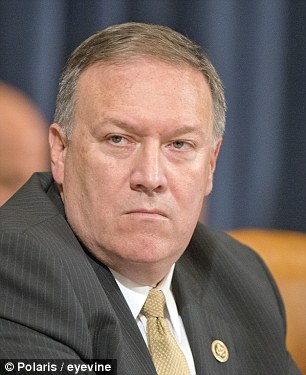 Memo: A Vote for Pompeo is a Vote to Kill the Iran Deal

The vote on whether to confirm Pompeo ahead of Trump’s Iran deal deadline is a referendum on the JCPOA and the Administration plans to terminate the agreement. The Senate has an opportunity to directly reign the President in from a reckless decision to abandon the JCPOA and – in the words of German Prime Minister Angela Merkel – risk splitting the West and leading to war.

A vote for Pompeo is a vote to kill the Iran deal. Senators who support the JCPOA, as well as Senators who initially opposed the agreement but believe it would be detrimental to U.S. interests to unilaterally abandon the accord, should vote against Pompeo and instead demand ironclad assurances that the White House will uphold the JCPOA.

Pompeo told Senators he would end his political opposition to the Iran deal if confirmed to the CIA. Then he lobbied Trump to kill the deal.

During his nomination hearing to become CIA Director in 2017, Pompeo was questioned about his politicized opposition to the Iran nuclear deal. His last tweet prior to being nominated for CIA Director had stated, “I look forward to rolling back this disastrous deal with the world’s largest state sponsor of terrorism.” However, Pompeo assured Senators that he would change his behavior at CIA and “provide straight information” on the deal’s implementation. “While as a Member of Congress I opposed the Iran deal, if confirmed, my role will change,” he testified. “It will be to drive the Agency to aggressively pursue collection operations and ensure analysts have the time, political space, and resources to make objective and methodologically sound judgments.”

However, as CIA Director – despite 10 separate IAEA reports confirming Iran’s compliance with the nuclear deal – Pompeo continued his political assault against the deal and lobbied Trump to exit the deal. According to a July report in Foreign Policy, “Although most of Trump’s deputies endorsed certifying that Iran was abiding by the deal, one senior figure has emerged in favor of a more aggressive approach — CIA Director Mike Pompeo. At White House deliberations, the former lawmaker opposed certifying Iran while suggesting Congress weigh in on the issue, officials and sources close to the administration said.”

Additionally, as former CIA analyst Ned Price wrote “Intelligence analysts familiar with the matter recounted to me that…Pompeo would adopt the Dick Cheney-esque strategy of asking the same question repeatedly — namely whether Tehran remained in compliance with the terms of the deal — apparently hoping for a different answer. Even without the facts on his side, Pompeo was said to have argued in favor of trashing the accord and ramping up the pressure on Iran.”

Pompeo argued for bombing Iran during the nuclear talks, and said it would be easy

In the midst of the nuclear negotiations with Iran in 2014, Pompeo joined Sen. Tom Cotton in a roundtable with reporters to call for an end to the negotiations. Pompeo argued for military action rather than diplomacy, saying “In an unclassified setting, it is under 2,000 sorties to destroy the Iranian nuclear capacity. This is not an insurmountable task for the coalition forces.“

As Congress prepared for a vote on the fate of the nuclear deal in 2015, Pompeo travelled to Vienna with Senator Cotton for meetings with the International Atomic Energy Agency (IAEA). There, they were briefed on a technical implementation plan between the IAEA and Iran to resolve an inquiry into Iran’s past nuclear activities with possible military dimensions. The plan was confidential, which is standard – arrangements between the IAEA and the countries it inspects are protected to ensure confidence that working with the IAEA will not lead to the disclosure of sensitive information and therefore deter countries from allowing robust inspections. However, rather than use this information to better understand the technical details of the JCPOA, Pompeo and Cotton publicly announced that the technical plan was a “secret side deal” that Obama was withholding from the American public. The claim became the basis for the House of Representatives passing legislation authored by Pompeo alleging that Obama had broken the law and that the JCPOA was therefore void.

Pompeo has engaged in stunts to boost his own profile at the expense of U.S. interests

Far from diplomatic experience, Pompeo’s history on foreign policy is full of bluster and cheap theatrics. Perhaps no incident demonstrates this better than his campaign, along with Reps. Lee Zeldin and Frank LoBiondi, to seek visas to inspect Iranian nuclear facilities in February 2016 – an echo of the infamous Tom Cotton letter to Iran. The letter, dripping with sarcasm, was sent to Iran’s Supreme Leader and head of Revolutionary Guards. It was aimed at stoking tensions and raising Pompeo’s personal profile at the expense of U.S. diplomatic credibility. It came at a sensitive time for implementation of the JCPOA when many hoped that good faith implementation of the agreement on all sides could open opportunities to negotiate additional compromises from Iran outside the nuclear sphere.

As CIA director, Pompeo revealed late last year that he sent a warning letter to Qasem Soleimani, head of Iran’s Qud’s Forces. Former CIA heads and officials, Congressional staff, and other national security experts called the effort a “political stunt” and evidence that Pompeo was “acting more like a Trump political surrogate in his CIA post than a discreet intelligence chief.” Tehran, meanwhile, seized on the effort – publicizing that Soleimani did not bother to open the letter.

Even at CIA, Pompeo worked closely with some of the most prominent advocacy groups working to kill the Iran deal. Pompeo spoke at a conference for the ideological anti-Iran diplomacy group Foundation for Defense of Democracies, and even provided the group’s in-house publication “The Long War Journal” with advance copies of declassified materials aimed at increasing political pressure against the Iran deal.