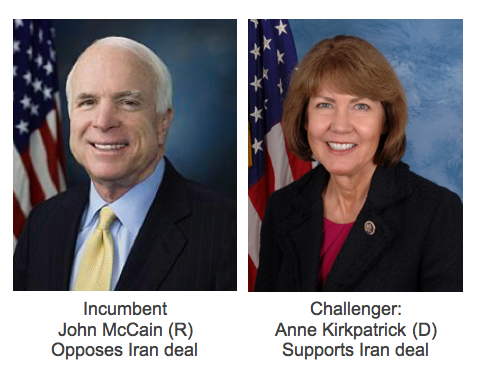 Washington, DC – Control of the Senate is up for grabs this Election Day, and many of the most important Senate races are sharply divided on issues important to the Iranian-American community. Some of the most endangered incumbents are Senators who led the opposition to the Iran deal, have authored sanctions aimed at unraveling the deal, or who have stood in the way of efforts to repeal H.R.158 visa discrimination. Many of their challengers, meanwhile, have backed the accord and are being attacked for their pro-diplomacy positions.

Republicans currently hold a 54-46 majority in the Senate, meaning they control what bills go to the floor for a vote and what issues get priority. If Democrats pick up five seats in the November elections, they will take control of the Senate next year.

Below, we review the ten most competitive Senate races that could decide which party holds the majority – and how the next Congress handles issues like the Iran deal, sanctions, and visa discrimination. Sen. John McCain is in for the political fight of his life. If he survives his August 30th Republican primary election against Osteopath Kelli Ward (who says she wants to mix the mortar for Trump’s border wall), he will go on to face Democratic Congresswoman Ann Kirkpatrick in November. While McCain – an influential lawmaker and Chair of the Senate Armed Services Committee – has vocally opposed the administration’s negotiations with Iran from the outset and signed onto numerous bills to unravel them, Kirkpatrick supports the Iran deal and has pledged to support legislation to repeal discriminatory visa restrictions against dual nationals. McCain has endorsed Trump but is clearly in distress about the top of the ticket (Trump only narrowly leads Clinton 42% to 40% in Arizona in a post-convention CBS poll). If McCain reverses his endorsement of Trump he is in danger of alienating his base; if his endorsement stands, he alienates 30% of the population, which is Hispanic, as well as moderate women. The polls are all over the place, with some showing McCain up and a few showing Kirkpatrick gaining, but it is rare for an Arizona Republican to be in such a tight race with a Democrat at all. This seat is critical to both parties in the fight to control the Senate and the Presidential election so it will get a lot of attention. Many thought that Democrats had a strong shot at taking the seat of formerly retiring Senator Marco Rubio – a major opponent of the Iran deal and a supporter of new sanctions efforts aimed at unraveling the agreement. But the race was turned on its head in June. First, Rubio reversed his decision to step down and decided to run for reelection. Then, the stronger of the two Democratic candidates – Rep. Patrick Murphy, a supporter of the Iran deal – was found to have embellished important parts of his resume. The other Democrat in the race – Rep. Alan Grayson, who announced his support for the Iran deal after Murphy – has been charged with ethics violations for running a hedge fund while in office in addition to being accused by his ex-wife of domestic abuse. Rubio is running ahead of Murphy in the latest polls by 6 points, but Clinton is ahead of Trump by 5 so this race is far from over. Kirk is perhaps the top Iran hawk in the Senate; he is the author of some of the most strident sanctions against Iran and led efforts to block the nuclear negotiations. Kirk’s opponent, Democratic Rep. Tammy Duckworth, is ahead in the very few polls that have been conducted. Duckworth voiced early and strong support for the Iran deal. Senator Mark Kirk is widely viewed as the most vulnerable Republican Senator, but he is trying harder than others to hold on. He endorsed Trump in March, but he became the first major candidate to rescind his endorsement, attempting to appeal to moderate Republicans and Democrats. It could very well be too little, too late and his efforts to become more moderate have alienated his conservative base.

Republican Sen. Dan Coats is retiring, so this is an open seat. Until mid July, Republican Rep. Todd Young was heading toward a victory over former Democrat Rep. Baron Hill and the Republicans believed the seat was safe. However, the Democratic Campaign Committee convinced the popular former Governor and Senator Evan Bayh to run for his old seat instead with Hill now running to secure his old House seat. Bayh brought with him a $9 million war chest and name recognition, transforming the race. Neither Republican Young nor Democrat Bayh supports the Iran deal. Bayh is one of the few Democrats who opposed the deal and helped spearhead at least two separate organizations that spent millions to try to block the deal. Most analysts now predict another Democratic pickup of a Republican seat. Democratic Minority Leader Harry Reid is retiring so this Senate seat is open. Neither candidate – Republican Rep. Joe Heck and Democratic former Nevada Attorney General Catherine Cortez Masto has a strong persona or image in the state. The two powerful and polarizing personalities dominating this race are Trump and Reid. Heck is trying to make the race a referendum on the retiring US Senate Minority Leader Reid; Cortez Masto is trying to hang Trump around Heck’s neck like an anchor. Heck opposes the Iran deal and, because of Cortez Masto’s early and vocal support of the Iran deal, the National Republican Senatorial Committee has been airing attack ads against her since October of last year on her pro-deal position. There are lots of moving parts in this race – the huge Hispanic, Democratic leaning population has been energized in part by the prospect of a Latina representing Nevada in Cortez Masto. But outside groups (Sheldon Adelson and the Kochs) are pouring money into the race in support of Heck. Clinton is up by about 3 points here but the real battle begins in September. New Hampshire is one of the states that has shown a dramatic shift since the conventions and has placed incumbent Sen. Kelly Ayotte, who is a major Iran hawk and the sponsor of new sanctions aimed at unraveling the Iran deal, in real danger. Democratic candidate Gov. Maggie Hassan, who supports the deal, has been a strong challenger and polls have gone back and forth all year. Then came the conventions and the Trump meltdown of the last several weeks. The WBUR poll of August 4 has Hassan up by 10 points, sending shock waves through the Republican establishment. The same poll shows voters across the political spectrum consolidating around Clinton who now leads Trump by 9 points in the state. Anything can happen, and polls are fluctuating , but this race has been a canary in the coalmine warning for Republicans in New Hampshire and across the county. The Senate race in North Carolina has become the most surprising of the list. Roll Call wrote just last week, “Nobody thought Burr was going to have a real race.” But Burr’s opponent, Democrat Deborah Ross, outraised him in the first two quarters of the year. Ross, a supporter of the Iran deal, has gotten the attention of the Democratic Senatorial Campaign Committee (DSCC), which has moved this race to its top tier. The Senate race is now labeled a toss up and the Clinton campaign and the DSCC are pouring resources into the state. A recent poll has Clinton  up by 5 and Ross up by 2 and the battle for this state will be fierce. Many political pros are giving North Carolina to Clinton and Ross may well ride her coattails to the Senate. Republican incumbent Senator Rob Portman is considered a moderate, has over $13 million cash on hand, and has been endorsed by the four major labor unions (100K members total). An opponent of the Iran deal, he signed the Cotton letter warning Iran’s Supreme Leader against agreeing to the nuclear accord. Ignoring Trump, he has focused on local issues like the opioid epidemic in Ohio. In the last poll, Portman posted a 5% lead over his opponent, Democratic former Governor Ted Strickland. Strickland has about $3 million in the bank and has voiced strong support for the Iran deal. Clinton is up by 5 in Ohio and both the Clinton campaign and the DSCC have made major ad buys and committed staff to winning this state and electing Ted Strickland.  Portman is so desperate to hold on to his seat that he is sending his staff to Clinton rallies seeking support.  Republican Gov. John Kasich told CNN that he does not believe Trump will win Ohio. Anything could happen. Trump needs Pennsylvania if he has any chance of winning the White House and the Republicans badly need to hold this Senate seat if they have any chance of keeping the Senate. Although they have not won the state in 20 years, Republicans always believe they have a shot at Pennsylvania because of its stark demographics. Philadelphia and its surrounding counties tend to be progressive, Pittsburgh tends to be more conservative but persuadable, with the center T-shaped section very conservative and blue-collar. On paper, the T section is perfect Trump territory, but many of those families are Blue and Gold Star families who could be turned off by Trump’s attacks on the Khan family. Recent polls show that even the voters in the T are leaning toward Clinton. In one of the few polls released after the conventions, Clinton leads Trump here by 11 points and Senate candidate McGinty is up by 4. Incumbent Republican Senator Pat Toomey, a strong opponent of the Iran deal and signatory of the Cotton letter, is worried and the National Republican Senatorial Committee is now airing ads against McGinty attacking her support of the Iran deal. Senator Johnson is the author of the Senate companion to H.R.158, barring Iranian dual nationals from visiting the U.S. under the Visa Waiver Program. He is a vocal Iran deal opponent, and pushed legislation in 2015 that would have mandated a two-thirds vote of approval before the Iran deal could go forward, which was viewed as a poison pill and rejected.

Former Senator Russ Feingold, a powerful voice in favor of the Iran deal, had maintained a double-digit lead in the race most of the year and the Republican Campaign Committee all but gave up on Johnson. However, outside groups have decided to help Johnson with a $1 million ad buy that begins in September. Conventional wisdom still gives the seat to the Democrats. But, House Speaker Paul Ryan (R-WI) and GOP Chair Reince Priebus are trying desperately to protect Republican control of Congress, including home state incumbent Senator Johnson, all the while seeking to mitigate the harm of Trump’s candidacy.