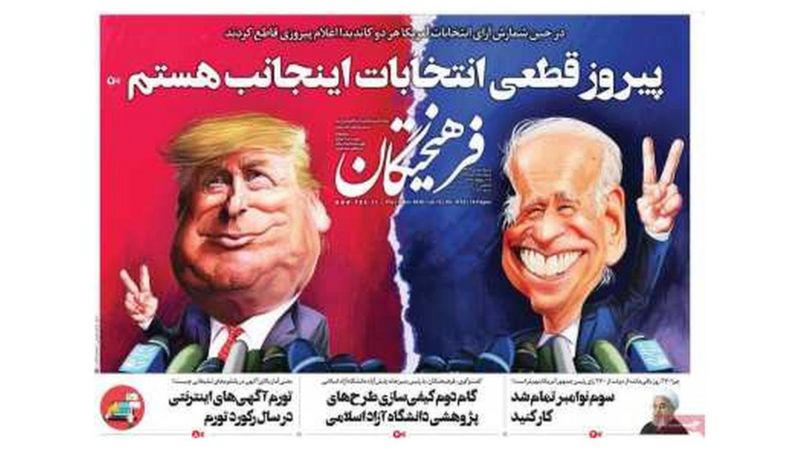 The U.S. election has been closely followed by the Iranian public and media. Iranian outlets and social media are providing unprecedented coverage of the results, reflecting the significance many Iranians view the election as having on their lives.

BBC Persian said that for many Iranians, the U.S. election is a binary like “life and death or survival and collapse or compromise and war.” Many Iranians hope the coming of a Biden administration will improve the domestic economic situation, which for years has been devastated by Donald Trump’s “maximum pressure” policy.

Iranian outlets and social media have explained the electoral process in the U.S. and provided minute-by-minute analysis of the results in battleground states. Many jokes have been shared and some have made comparisons to Iran’s political system. One political analyst, Fuad Izadi, spurred widespread mockery for saying on national TV that the issues in America’s electoral system would be resolved if the U.S. had a “Guardian Council  and Velayat-e Faqih [the role of Iran’s Supreme Leader].”

Many Iranians also circulated an old interview with Foreign Minister Javad Zarif. In the video, which is from before the Obama-era nuclear negotiations, Zarif said that as Iran’s ambassador to the United Nations, he had relations with and talked with many U.S. senators, including Joe Biden, who for years was the chair of the Senate Foreign Relations Committee.

BBC Persian has said  about the video: “[It] seems to have increased the hope that with the acquaintance that the foreign minister has with Biden and their past relations, it is possible that with his victory, this familiarity will lead to a breakthrough in U.S.-Iran relations.”

However, in an interview this week with CBS News, Zarif said Iran would not “renegotiate” the JCPOA. Zarif stated: “If we wanted to do that [renegotiate], we would have done it with President Trump four years ago.”

Zarif added in the interview with CBS News: “We can find a way to reengage, obviously. But reengagement does not mean renegotiation. It means the U.S. coming back to the negotiating table.”

Some conservative papers sought to compare the U.S. election to Iran’s 2009 election. Conservative papers like Vatan-e Emrooz and Farhikhteghan published articles comparing Trump to Mir Hossein Mousavi, the reformist candidate in 2009 who alleged fraud occurred and the election was stolen.

Members of parliament have introduced a bill mandating that Iran leave the JCPOA and expand its nuclear program. Bills introduced in parliament are processed based on different categories of “urgency.” They must also be approved by the Guardian Council.

Members of parliament voted to proceed with this bill with the “first” level of urgency. This is not the fastest path for a bill to pass parliament but is more expedited than the normal process.

The bill was introduced with the first level of urgency with 196 votes in favor, 6 votes against, and 4 abstentions. It is titled “Strategic Action to Lift Sanctions.”

The bill requires specific developments in Iran’s nuclear program. For example, it states, “The Atomic Energy Organization is required in two months after this law is approved, to annually produce 120 kilograms of uranium enriched at the 20-percent level at the Fordow facility and to stockpile it domestically.”

The bill also calls for steps for Iran to reach an enrichment capacity of 190,000 SWU, which Ayatollah Khamenei has said Iran needs to produce the nuclear fuel it requires. The bill states that within three months of its passage, the Atomic Energy Organization of Iran must operationalize 1,000 IR-2M centrifuges in Fordow.

The bill also requires that Iran’s Arak Heavy Water reactor start the process of being reverted to its old, pre-JCPOA design within four months of the bill’s passage. This would make the reactor more capable of producing plutonium, which can be used to develop a nuclear bomb.

Although it is likely that the current conservative parliament will pass the bill, it is unclear when this would occur.

Ayatollah Khamenei said in a televised speech that Iran’s policies toward America will not change with the change of “individuals” in Washington. He proclaimed: “Our policies toward America are clear and do not change with the coming and going of individuals. It makes no difference for us who comes and goes [in the U.S. presidential race]. Yes, there will certainly be changes with the arrival of people, but these changes have nothing to do with us and we do not care about them.”

Khamenei further said: “Regardless of who is elected in America. We must pay attention to the fact that the American regime is under severe civil, social, political, and moral decline … when a regime reaches this state, its life will not go on much longer. Some who come to power may oversee the destruction of this state later, others will accelerate this process.”

Previously, in a September 2019 speech, Khamenei said Iran would only diplomatically engage the U.S. if it returns to the JCPOA. He said short of this, Iran would not negotiate with the U.S in any capacity.

Khamenei’s speech this week was on the anniversary of the 1979 hostage taking of personnel at the U.S. embassy in Tehran. Khamenei defended the action, and Iran’s overall posture against the United States, as a “rational act.”

Khamenei stated: “Confronting arrogance [the U.S.] is rationality. If we succumbed to them and came to terms with them, this would be against rationality.”

Khamenei further emphasized that Iran should remain opposed to the United States. He stated: “Those who surrendered to America and gave into America’s bullying have been worse off.”

Khamenei also spoke about the ongoing Azerbaijan-Armenia conflict. He said the war was a “bitter event,” is “not good” for the security of Iran and the region, and “must end.”

Khamenei said about ending the war: “One of the main conditions for this is the return of all of the land of Azerbaijan that has been occupied by Armenia. This must be done, and international borders must be respected. But the security and serenity of the Armenians of this region must be preserved.”

The proposal echoes Khamenei rhetoric, calling for the withdrawal of “occupying forces from occupied territories” and “ensuring the people’s rights.” There is seeming alignment between the positions of Iran and Russia. According to the Moscow Times, Russia supports Azerbaijan reclaiming seven areas surrounding Nagorno-Karabakh that Armenia has controlled for 26 years.

Russian President Putin has said in this regard: “Our position is absolutely open about the possibility of handing over these five plus two districts to Azerbaijan, alongside the provision of a specific regime for the Karabakh zone and the securing of a connection with Armenia.”

Rouhani Talks about the U.S. Election & Criteria for Negotiations

President Rouhani discussed the U.S. election during his weekly cabinet meeting. Rouhani stated: “The recent election in America was instructive in many ways but for now we won’t enter that [discussion]. For us, the party and individual [in the White House] is not important. The approach of the next administration is important. America returning to law, that is what is important to us. America returning to all international and multilateral treaties.”

Rouhani emphasized that the next U.S. administration should treat Iran with “respect.” He stated: “Instead of sanctions, we want respect, regardless of who is in power [in the U.S.]. If America sets aside sanctions and substitutes it with respect, our situation would be different.”

Rouhani said Iran has centered its policies on the basis that U.S. policies toward Iran will not change. He stated: “We planned on the assumption that the approach and behavior of America will not change to a correct one. It will be another story if they are disciplined and learn lessons and understand that in the past over three years all they pressure they brought has not had any impact. But if they do not learn this lesson, our decisions are based on managing and developing the country if the situation is difficult.”

Rouhani said in a separate address this week that the “difficulty” of the past three years has been unprecedented. He proclaimed: “The difficulty which has been imposed on the government and people in the past three years has no parallel in history. We have always been under pressure, but this was economic warfare. They increased sanctions during the period of the coronavirus. But it does not matter who wins the U.S. election, the next U.S. administration will submit to the Iranian people.”