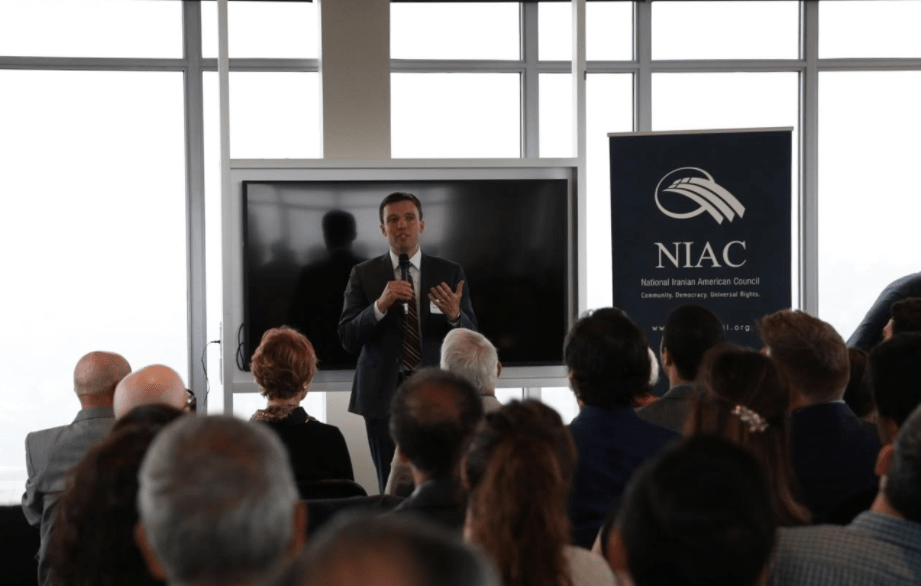 The National Iranian American Council (NIAC) has once-again made its presence felt in Seattle. NIAC, a nonpartisan, nonprofit organization dedicated to strengthening the voice of Iranian Americans and promoting greater understanding between the American and Iranian people, hosted a sold-out downtown fundraiser on Thursday, June 15th; it was NIAC’s first Seattle event in six years.

Ninety plus people gathered at Insignia Towers, home of NIAC Treasurer Saïd Amin, to raise money for the grassroots organization; attendees were also there to show appreciation for Washington Attorney General Bob Ferguson and Solicitor General Noah Purcell for their efforts in defeating President Trump’s Muslim ban. Earlier this year, the state Attorney General made national headlines by bringing down the initial travel ban. (Disclaimer, The Iranian is owned by Amin)

Thursday’s event, which raised nearly $50,000 was attended by a diverse crowd, including David Sellers from nearby Ballard, WA. When asked what compelled him to attend the event, Sellers, who is not of Iranian descent, said: “Given the the influx of hate crimes and the continued executive efforts to implement a nationwide travel ban, it’s absolutely crucial to step outside myself and understand the issues Iranian Americans and other immigrant communities are facing. I believe that the NIAC fundraiser is a perfect opportunity to do just that.”

After a period of mingling and delicious Persian food served by Zeitoon Grill, the crowd settled in their chairs to hear Trita Parsi, NIAC President, introduce the keynote speaker, Bob Ferguson. In his welcoming remarks, Parsi quipped that he would like to see a Game of Thrones type chess match where Ferguson, who is an internationally rated chess master, would play President Trump to settle the travel ban, once for all.

Ferguson, who was greeted with a standing ovation, spoke about his office’s efforts to defeat the first travel ban. While many assume that it must of been a tough legal decision to file a lawsuit challenging the President, Ferguson said that, “in many respects, it was not a particularly hard decision.”

Shortly after the announcement of the ban, he and Solicitor General Purcell met to discuss the ban and possibly file a lawsuit to challenge the President.

“The questions that Noah (Purcell) and I talked about in that conversation were: Are Washingtonians being harmed? Yea, they had to be harmed (by this travel ban). They can’t travel freely, right? It’s contrary to us as a country, what we stand for as a country, to have a policy like that. Have we learned our lesson from past experiences along these lines, of excluding people rather than welcoming them? That was number one. Number two, do we have good legal arguments? We’re lawyers, right?” He continued, “…we felt that we had good legal arguments. And third was whether I, as attorney general, could bring the lawsuit on behalf of the people, and we felt we could.”

Ferguson went on to say that, at the time, most legal experts felt their case was weak; including prominent legal figures like CNN legal analyst Jeffrey Toobin and Alan Dershowitz. Yet, they proved many wrong, won the case and dealt the President a legal and political blow.

Ferguson emphasized that we are a nation of laws, a democracy with institutions in place that can survive any administration–including this one. He went on to chide President Trump by saying that, “you can not tweet your way out of a federal courtroom” and that, “those comments that he’s made about the travel ban, for example, hurt him in this case. We quoted his tweets, we quoted his advisors […] and they have hurt him in the courts. So when I say you can’t tweet your way out of it, that’s stuff I’m talking about. It can actually hurt you in the courtroom. So every time you see him say something crazy about the travel ban, yes, be mad about that, but know that it hurts him legally in the courtroom.”

Ferguson concluded with a quick story about his 9 year old twins asking why he was away from home so much, spending countless evenings at work. Ferguson’s reply?  “The President did a bad thing and daddy is trying to stop it.”

The next speaker was Noah Purcell, the fast-rising 37-year-old State Solicitor who Ferguson regards as “the most brilliant lawyer I have worked with.” Purcell, whose Iranian-American wife Jasmin Weaver was in attendance, talked about media coverage of Iran, as well his personal connection and understanding of the Iranian American community.

“So much of the media coverage that we get in this country of Iran is so negative. It’s all about the government, and none of it is about the people or the culture, so to be exposed to the actual culture of Iran, and so many wonderful people from Iran who are our age, we (Jasmin) met in High School so we go way back, was an incredible thing. I learned a lot of little things and I also learned lots of important things, like Jasmin’s ‘cousins’ are not actually her ‘cousins’. ‘Cousin’ does not mean ‘cousin’ apparently.”

Purcell continued, “I also learned some very big things, in particular, that knowing something about a government of a country doesn’t tell you anything about the people, and ironically, I hope that the rest of the world understands this about us.” His last point resonated, prompting the audience to burst into laughter and applauds.

Jamal Abdi, Executive Director of NIAC Action, and Parsi were the next speakers. Each took turns talking up the importance of grassroots participation and fundraising.

Parsi poignantly articulated the cost of sitting on the sidelines. “94.1% of all of the deaths caused by terrorism on US soil have been committed by citizens of Saudi Arabia, UAE and Egypt. Zero by Iranians. Zero by any of the other countries on that were on that list. So why is this happening to us?” He continued,  “I have been working in Capitol Hill and Washington for 15 years now and I can tell you that the politics is not very complex, it’s essentially the law of the jungle, but with some codification. If you don’t stand up for your rights, they will be trampled on. If you don’t guard the dignity of your children, they will be blamed for the errors of others. And if you’re not at the table where decisions are being made, you will be on the menu.”

Thanks to a significant boost in donations, the Washington D.C. headquartered NIAC has recently hired a full time staffer in San Francisco and is scheduled to hire a staffer in Southern California later this fall. Given Thursday’s impressive event, NIAC appears poised to potentially build off this success and expand its presence in the Seattle area. The Iranianasked Abdi about the organization’s growth, to which he replied, “This is about Iranian Americans seizing the moment to reach our political potential. We’re in a moment of great challenges but also immense opportunities to rise to that challenge. We have a chance to organize within one of the most dynamic and resourceful communities in the country to protect not just Iranian Americans, but also other immigrant communities and the rights and values that brought our families to this country in the first place.”

This piece originally appeared in The Iranian.