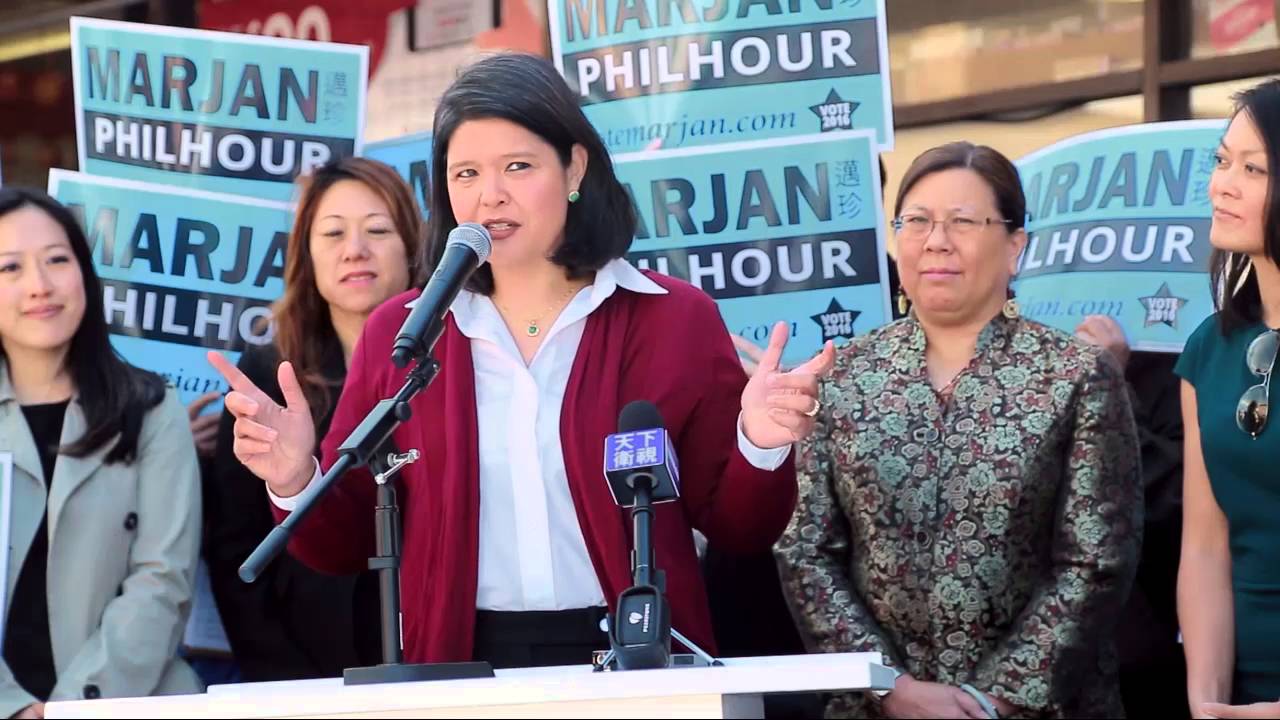 As a mother and the daughter of Iranian and Filipino parents, Marjan Philhour, a candidate for the San Francisco Board of Supervisors, understands the importance of diversity in politics.

“There hasn’t been a mother on the Board of Supervisors in five and a half years,” she said.  “There’s also never been a Filipino-American on the board or an Iranian-American woman on the board.  I think having that voice at the table really adds diversity and a different perspective to the conversation which I think only adds to our potential progress as a city.  Not only is it a historic moment for communities, but I think representation is key.

“We’ve seen what can happen when we don’t have a seat at the table, especially in light of the visa waiver program changes that would discriminate against Iranian-Americans and their children,” said Philhour, who is a candidate in District 1.

Philhour is not the only Iranian-American running for a place on the San Francisco Board of Supervisors. Ahsha Safai, former Deputy Director in Mayor Gavin Newsom’s Office of Community Development, is also vying for a seat in District 11. Safai has more than three decades of political experience and has long encouraged Iranian Americans to get involved in local politics.

Born and raised in the San Francisco Bay Area, Philhour began her work in public affairs at the age of 16, interning at the office of Democratic Representative Tom Lantos, the only Holocaust survivor to ever serve in the U.S. Congress.

For Philhour, this experience gave her the opportunity to further develop her interest in public service and create a network to return to after her undergraduate studies.  Looking back, she recognizes the importance of having a good mentor early on.

“Congressman Lantos taught me the importance of not only constituent services but of the honor and the responsibility that comes with serving in public office,” Philhour said.

Philhour continues to live by this important lesson in her current campaign to run for Supervisor in the Richmond District of San Francisco. She is one of ten potential candidates running for the seat.

Philhour started campaigning about a year and a half ago, talking to neighbors and trying to earn as many endorsements as possible.  “A lot of people asked me why I started so early, but for me, it was not too early to start talking about the issues of housing affordability, transportation infrastructure and supporting local business.”

Philhour graduated from UC Berkeley in 1996 with a degree in Political Science and spent the early years of her career working as a legislative assistant for the  House Committee on Education and the Workforce in Washington D.C.  After her time in D.C., Philhour moved back to California, where she served as the senior advisor to the chief of staff for Governor Gray Davis.

“I was so interested in giving back to the community and I knew that individuals can make a difference,” Philhour said of her time working for Davis.

In 2006, she opened her own consulting firm, Philhour & Associates, which provides an array of services from fundraising consulting to strategic communications.  The firm has been working with campaigns and nonprofit organizations ever since.

“In San Francisco and in so many other cities around California and around the country, we are seeing housing crises and here in San Francisco, we are feeling it very acutely.  Families are being pushed out and there are less and less options for low and middle-income families,” Philhour said. “I’m very interested in advocating for and promoting and championing more housing affordability, transportation, infrastructure as well as support for local businesses and our local economy.”

As a wife and mother of three, Philhour credits her family for her motivation to run for office.

“I’m raising my three children here and I’m hopeful that we’ll be able to create a neighborhood and craft policies that will allow them to come back here and live here themselves,” Philhour said.

In addition to focusing her efforts on the needs of families, she also hopes to improve the local economy by supporting small businesses.

For Philhour, the desire to consistently work hard and achieve progress is very important.  “As a small business owner and someone who has worked to keep clients happy, I’ve learned that you’re only as good as your last good thing.  It’s really important to be able to deliver for your constituents and to be able to communicate that,” she said.

If elected to the Board of Supervisors, Philhour says she plans to work very hard to develop a strong sense of communication between the neighborhood and city hall and to keep the people of District 1 included in the process.

“Because of my experience in state and federal governments and also working on local, state and federal campaigns, I’ve seen first-hand how those three levels of government can work together,” she said. Philhour hopes to bring the same level of cooperation and teamwork to her work on the Board of Supervisors.

This is the third of many profiles in a series highlighting civically engaged Iranian Americans, as part of NIAC Action’s Beshkan the Vote campaign.