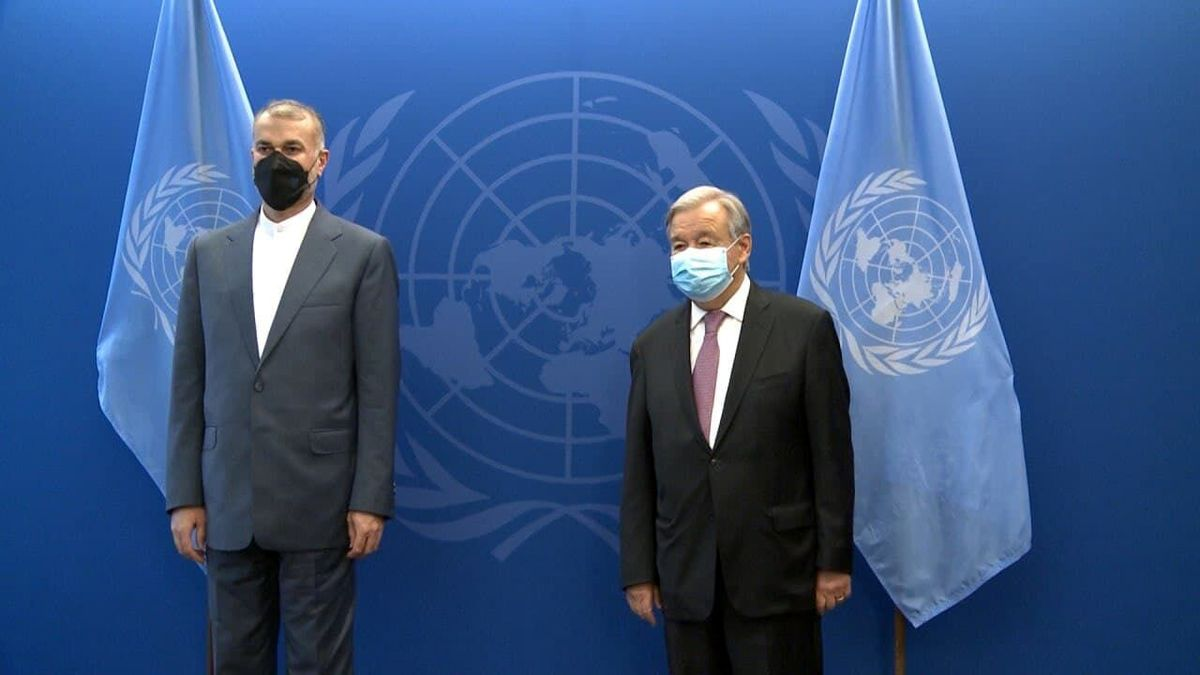 At the UN General Assembly, Foreign Minister Hossein Amir Abdollahian says Iran will “judge” the U.S.’s approach on the JCPOA based on its “practical behavior” and not the rhetoric of U.S. officials. During his time in New York, Abdollahian discussed the nuclear file individually with the foreign ministers of the P4+1 (Germany, France, the UK, Russia and China) as well as with EU High Representative Josep Borrell and UN Secretary General António Guterres.

Abdollahian says Iran will return to the Vienna negotiations “soon” and at the “first opportunity.” However, he did not give a specific date.

At a press conference in New York, Abdollahian criticized the approach of the U.S. and the EU on restoring the JCPOA. He said Europe had not abided by its JCPOA obligations and that the U.S. has taken a “paradoxical” approach of saying it wants a JCPOA return and imposing new sanctions.

Abdollahian’s rhetoric stands in contrast with the rhetoric of former President Hassan Rouhani prior to the end of his administration. Rouhani praised the Vienna talks for making progress and said a deal was at hand. He called on then-deputy Foreign Minister Abbas Araghchi, who was leading the Iranian delegation in Vienna, to be given authority to finalize a deal.

Abdollahian said at the UNGA: “Our expectation is that U.S. officials come to Vienna with a realistic mindset and instead of beautiful words, take actions that are practical, positive, constructive and measurable.”

Abdollahian said Iran under the Raisi administration was still reviewing the nuclear file. He said Iran would return to the Vienna talks as soon as this review was complete.

Abdollahian also called for the release of Iranian frozen assets in banks in Japan, South Korea and other countries to enable Iran to buy COVID vaccines and other medical goods. He said U.S. sanctions were “terrorism” against Iran.

Health Minister Bahram Einollahi confirmed that Iran is now importing Pfizer’s COVID vaccine but said its supply would be limited. He stated: “The Pfizer vaccine will reach a very limited number of people and will be for mothers who are pregnant and there won’t be enough for others.”

According to Raisi, Iran has “ordered” 2,400,000 doses of the Pfizer vaccine and has “finalized” a purchase of 5 million Johnson and Johnson vaccines.  Recently, an official from Iran’s Food and Drug Organization said his organization had approved the “emergency use” of these vaccines in Iran.

Early in 2020, Ayatollah Khamenei banned the use of the “British and American vaccines” in Iran. This led to the Iranian Red Crescent cancelling donations of the Pfizer vaccine to Iran.

In August, Khamenei reversed this ban amid the devastating toll of the Delta variant in Iran.

Iran counts petrochemical products as part of its non-oil exports.  According to Iran’s Trade Promotion Organization, these products accounted for 56 percent of Iran’s non-oil exports in the first five months of this Iranian year.

According to Iran’s Trade Promotion Organization, in the first five months of this Iranian year, Iran’s petrochemical exports increased by 7 percent, but their value increased by 117 percent. This is because of an increase in the global price of oil and oil-derived products.

Iran’s customs data further shows that Iran imported roughly $23 billion worth of goods in the first six months of this Iranian year. Not counting oil exports, Iran would have a $1.4 billion trade deficit so far this year.

In the Iranian month of Shahrivar, which was from August 23-September 22, Iran imported $6.6 billion worth of goods. This breaks a 10-year record for the highest value of monthly imported goods in Iran.

According to Iran’s customs data, 30 percent of its exported goods went to China and China is also the source of 21 percent of Iranian imports. Iraq is the destination for 17 percent of Iranian exports, Turkey for 11 percent, and the UAE and Afghanistan each account for roughly 10 percent. As such, 78 percent of Iran’s total exports have gone to five countries so far this year.

The IAEA has said in a new report that Iran still has not replaced the memory cards of IAEA surveillance cameras at a nuclear facility in the city of Karaj. Earlier this month, Iran and the IAEA reached an agreement for IAEA surveillance cameras to be repaired and have their memory cards replaced. Many of these cameras were damaged in various acts of sabotage against Iran’s nuclear program, which are widely believed to have been carried out by Israel.

The IAEA report says Iran has given permission to replace camera memory cards at many of its nuclear facilities with the exception of this facility in Karaj. In response, Iran’s IAEA Ambassador Kazem Gharibabadi said the IAEA report was not accurate and goes beyond the recent Iran-IAEA agreement.

On June 23rd, Iran said there had been a drone attack on this facility in Karaj. Iranian reports said the attack caused little damage but resulted in one IAEA camera being destroyed and another badly damaged.