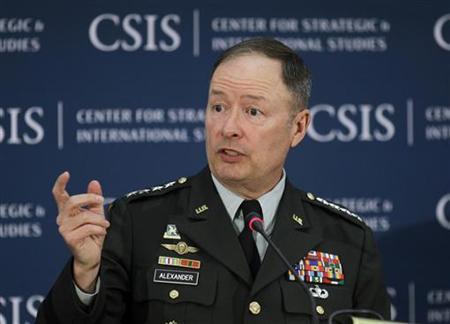 Washington, D.C. – “I think there is tremendous benefit—if we can get an agreement—to getting rid of the sanctions, and the reason is that it gives the Iranian people more access to what’s going on,” observed General Keith Alexander (ret.), former Director of the National Security Agency, speaking at a Center for Strategic and International Studies (CSIS) sanctions conference last week.

While many of the event’s speakers, such as U.S. Treasury Secretary Jack Lew, touted the impact of sanctions against Iran’s economy, others considered the difficulty in trading in sanctions for a nuclear deal.

Stephen Hadley, who served as National Security Adviser under President George W. Bush, cautioned against an overreliance on sanctions. “Sanctions, in some sense, are a prisoner of their own success,” he said. “They have been so visible…people seem to turn what is a tactic into a strategy.”

Hadley continued “there is always a problem when you use sanctions to put pressure on a regime,” because the question that often gets lost is “pressure for what purpose?” If the aim of the sanctions was to “try to get the Iranians either to unilaterally give up their nuclear program or to come into a negotiation, now having come to the table, we have an obligation to see if we can come to a negotiated solution,” he said.

Lifting the sanctions, however, could prove to be a difficult task politically. While the President has the authority to temporarily waive many of the sanctions, it would ultimately require an act of Congress to lift the measures under a final nuclear deal—a prospect that leaves many observers skeptical.

Michèle Flournoy, former Under Secretary of Defense for Policy and CEO of Center for a New American Security, highlighted one of the concerns that could jeopardize a move for eventual sanctions relief, observing that “once you let this particular [sanctions] regime go, there is no hope of getting anything that looks like this back for a long time.”

At the same time, Jane Harman, a former Democratic Representative in Congress who is now President of the Wilson Center, expressed concern that sanctions could fall apart without a deal. “Much of the world wants to resume trade with Iran,” she said, “but a lot of the members of the coalition, if there is no deal, are going to want to roll back their participation” in enforcing the sanctions.

For his part, Hadley urged that we “not get seduced by sanctions and this visibility” and instead, “embed them in an overall strategy using all elements of power in order to achieve our objective.”

General Alexander emphasized how a nuclear deal that lifts sanctions would benefit the Iranian people, which he said would in turn benefit Americans. “I think having them closer to the Western world is a good thing and I think that is part of the solution. They are good people,” he said. “If you sent Arnold Schwarzenegger or any movie star over there, they would be treated great. The problem is that we aren’t communicating with them. I think it is in all our best interests to get there.”