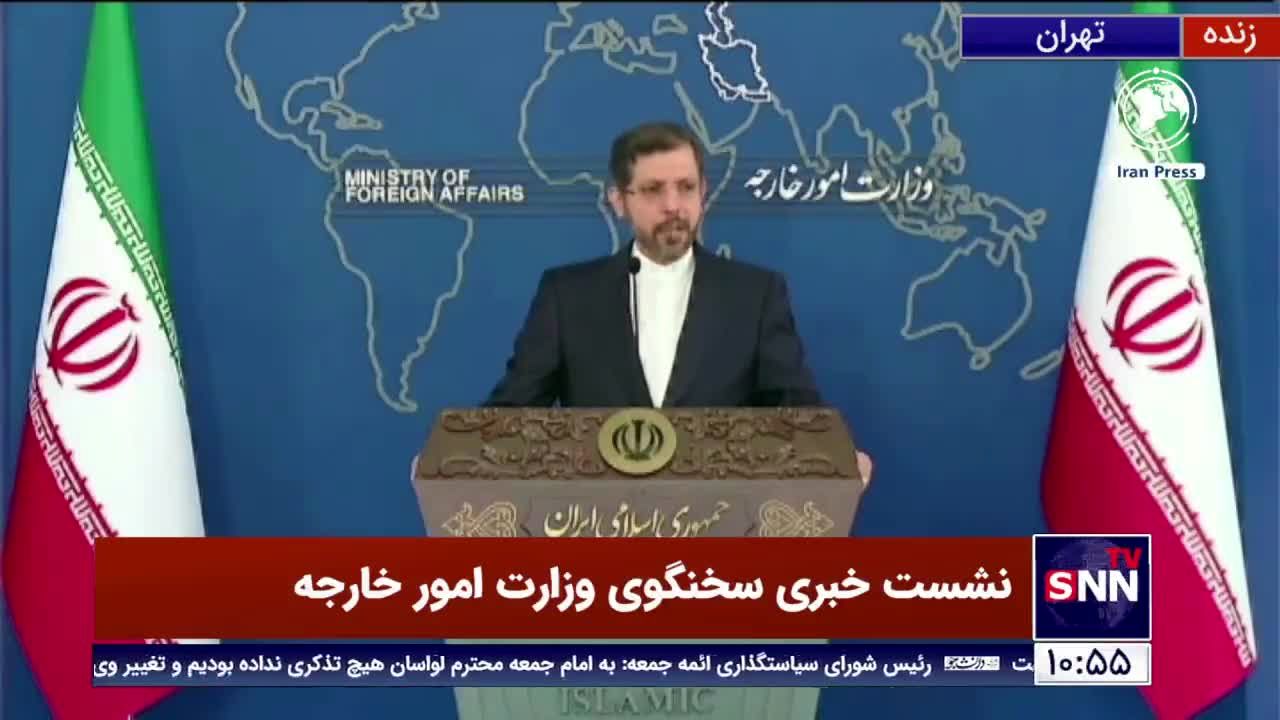 Iran’s Foreign Ministry Spokesperson Saeed Khatibzadeh outlined what Iran seeks from the Vienna JCPOA negotiations. Khatibzadeh said regarding wanting a guarantee that the U.S. will stick with the JCPOA: “America must give a guarantee that no U.S. government will again mock the world and international law and repeat this situation again [i.e. leaving the JCPOA].”

Khatibzadeh added: “The U.S. has a clear path for returning to the JCPOA. It must accept that as the party responsible for the current situation, it must reverse this path it has taken. To reverse this wrong path, it must lift the oppressive and illegal sanctions imposed after its withdrawal from the JCPOA all at once and in a consequential way.”

Meanwhile, Iran’s Deputy Foreign Minister Ali Bagheri, who is the new chief nuclear negotiator, is travelling to France, Germany, the UK for bilateral talks on the nuclear issue and other issues.

In France, Bagheri said Iran will not continue the nuclear negotiations from where they left off. Separately, Iran’s foreign ministry has said Iran has a new proposal and will not return to the point where the negotiations left off.

Bagheri also said Iran is not engaging in “nuclear negotiations.” He said the nuclear issue was resolved with the JCPOA, and the current negotiations are centered on lifting U.S. sanctions that violate the deal.

Russia and the European parties to the JCPOA have all called on Iran to restart the Vienna negotiations from the point they left off at in June.

Iranian analyst Ali Shukuyee wrote about Russia’s relations with Iran in an article for the reformist Fararu. He said that Russia and Iran have many mutual interests and areas for cooperation, but that Russia had two redlines: Iran developing nuclear weapons and Iran exporting natural gas to Europe.

The IRGC has freed an oil tanker belonging to Vietnam. The tanker was seized on October 24. As explained in last week’s issue of Iran Unfiltered, the U.S. and Iran gave differing accounts of the tanker’s seizure. Iran claimed the U.S. transferred Iranian oil to this tanker to seize it, while the U.S. rejected this claim.

Iran says these two drones left the area after being warned. Roughly one fifth of global oil passes through the Strait of Hormuz.

These two incidents in the Persian Gulf and Gulf of Oman come weeks before the next round of nuclear negotiations will take place in Vienna. Confrontations between Iran and the U.S. in the Persian Gulf have greatly increased since the Trump administration reneged on the JCPOA and sought to eliminate Iran’s oil exports.

Iran’s COVID Vaccination Rate Up, But Other Rare Diseases Are Increasing

According to Iran’s Health Ministry, roughly 80 percent of Iranians have had one dose of a COVID vaccine and 54 percent have had two doses, as of November 4th. The daily death rate in Iran has significantly decreased since the Delta variant peak in August but is still higher than levels seen during parts of last summer. On November 8th, 140 more people died from COVID in Iran, bringing the official country-wide total of COVID deaths to 128, 439.

Meanwhile, Masoud Mardani, a member of Iran’s Committee to Confront AIDS, has warned other rare diseases have increased in Iran since the COVID pandemic started. He said Iranian physicians have lost their focus on identifying and preventing diseases like AIDS.