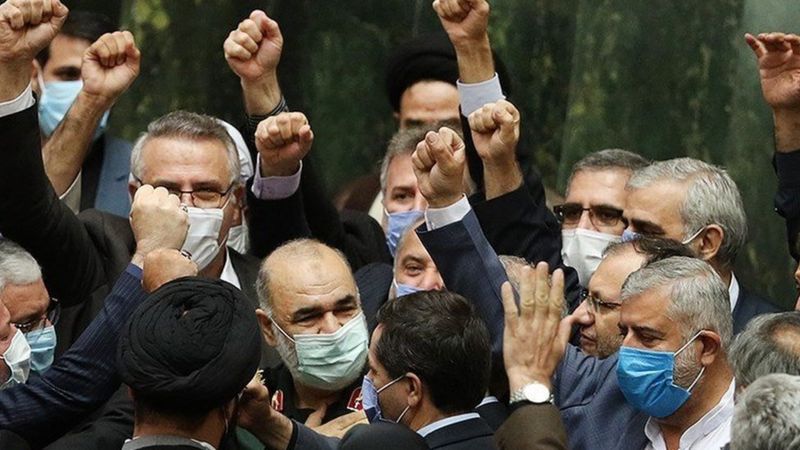 Increasing Calls for a Military President

Increasing Calls for a President with a Military Background

Mohsen Rafiqdoost, who helped found the IRGC, says several people from the IRGC seek to run in next year’s presidential election. Rafiqdoost served in the IRGC during the Iran-Iraq War and was for years the governmental minister of the IRGC, a post that has since been abolished.

In an interview with the Khabar Online outlet, Rafiqdoost said a military officer becoming president might be able to “save the people” from current difficult conditions. Rafiqdoost named Hossein Dehghan, a former minister of defense and former IRGC officer, as a contender in next year’s presidential election.

Rafiqdoost says he believes a military commander would be a better fit to manage the country. He stated: “The people will welcome a military figure if they decide he can fix the current uncontrolled situation.”

Rafiqdoost added: “All the [Revolutionary] Guards understand politics well. But they are neither left nor right or reformist or principlist [conservative]. They are Guards and support the Leader [Khamenei] but understand politics.”

Hossein Allah-Karam, the head of the hardline Ansar-e Hezbollah group, has also voiced support for a military figure becoming the next president. Allah-Karam has said: “Iran has no choice but to carry out its duties in the region, because if it doesn’t it will be partitioned. As such, the people have reached the conclusion that they have to elect a strategic figure who has a military background.”

Naser Emani, a conservative analyst, has questioned what it means for a “military figure” to be president. He has stated: “What is the meaning of a military person? If you mean someone who has a military background but for a long time has not had experience with the military, I would not call them a military person. Because many people in this country who hold governmental responsibility or have held positions in the past have military backgrounds.”

Hossein Dehghan is the first person to officially announce he is running for president next year. Dehghan served as Rouhani’s defense minister from 2013-2017. He also served as commander of the IRGC’s air force and headed the Martyrs Foundation, a major government charity.

Many conservatives in Iran are coalescing around the idea of a military figure becoming the next president. However, they are not necessarily supporting Dehghan, whose reputation is more of a moderate figure close to Rouhani.

Rouhani’s advisor Hesamodin Ashna praised Dehghan in a recent interview. Ashna said Dehghan was a “very capable manager,” has “charismatic authority,” and can engage Khamenei, other institutions, and the armed forces.

However, Dehghan’s main weakness is his lack of name recognition among Iranians. His career has largely kept him out of the public spotlight.

In the past, many political forces in Iran pushed for Qassem Soleimani to run for president. Other people with military background who are now being suggested as presidential candidates include: Saeed Mohammad, the head of the IRGC’s construction wing; Rostam Ghasemi, a former oil minister; Parviz Fattah; the head of the Foundation of the Oppressed; and Saeed Jalili, a former diplomat.

There are differences of opinion in Iran over the conflict between Azerbaijan and Armenia over the disputed Nagorno-Karabakh region. Several members of parliament from Azeri regions of Iran have criticized the Iranian government’s official position on the conflict. Several Friday Prayer leaders who are representatives of Ayatollah Khamenei have also voiced support for Azerbaijan.

Iran is a neighbor to both Azerbaijan and Armenia and shares a border with Nagorno-Karabakh. In the past week, bombs have landed inside Iranian territory, but have not yet harmed anyone or caused any damage. Over 130 Armenians and Azeris have been killed so far in the conflict.

Iran’s Foreign Ministry called for de-escalation and calm immediately after hostilities began between Azerbaijan and Armenia. Foreign Minister Zarif talked to his Armenian and Azeri counterparts and said the conflict can only be resolved diplomatically and offered that Iran can serve as a mediator.

Saeed Khatibzadeh, the foreign ministry’s spokesperson, stated: “We believe there needs to be a ceasefire and withdrawal from the conflict area so that there can be dialogue between the two sides. A bilateral dialogue [between Armenia and Azerbaijan] is the only solution to this conflict. Iran’s policy towards this dispute has not changed. We want to help facilitate dialogue and we believe that a military solution is not a sustainable solution for this issue.”

Ali Rabiee, the Rouhani administration’s spokesperson, has also stated: “The differences between the Azerbaijan Republic and the Republic of Armenia have a peaceful solution and Iran, Turkey, and Russia can help these two countries implement the UN Security Council resolution in order to peacefully resolve their differences.”

However, there have been rumors on social media that Iran is providing military assistance to Armenia. At the same time, some members of parliament and senior clerics have been calling for Iran to support Azerbaijan.

MPs from Azeri parts of Iran have opposed the Iranian government’s official neutrality on the conflict. MPs Kazem Mousavi, Ghani Nazari, Mehdi Isazadeh, Ruhollah Hazratpour, and others have all voiced strong support for Azerbaijan.

MP Isazadeh has said: “Armenia, Israel, and America are the anti-Islam triangle in the region. Just like we are sensitive about inflation and the increasing cost of living, we are sensitive on the issue of Nagorno-Karabakh and oppressed nations and Muslims in the world. Our diplomatic institutions must put aside superficial niceties. The basis of our position on Nagorno-Karabakh is the position of the leader of the revolution [Ayatollah Khamenei].”

In a joint statement, these four clerics stated: “There is no doubt that Nagorno-Karabakh belongs to Azerbaijan and is under occupation. It is necessary that this land is returned to Azerbaijan, a Shia country. The Azerbaijan government has acted in a completely legal and Sharia-compliant way to return this land.”

The statement added: The Islamic Republic has provided the highest level of help and support to Azerbaijan during the period of the occupation of Nagorno-Karabakh. It has defended Azerbaijan’s territorial integrity in all international forums and the foreign ministry continues to emphasize this. If it were not for the opposition of the Islamic Republic to the occupation, it would have certainly extended to Baku.”

The commander of the IRGC Hossein Salami spoke to parliament as part of a holiday commemorating the Iran-Iraq War. Most of Salami’s speech dealt with Iran’s relations with the United States.

Salami praised Ayatollah Khamenei and said Iran’s power was growing and the U.S. is declining. Salami said Khamenei’s policies have “disrupted the enemy’s focus and created power [for Iran] in different lands.” He added: “He [Khamenei] expanded the scope of the revolution’s base of power and forced the enemy to expand beyond its means. He increased costs for them and plunged America into political setbacks.”

Salami then discussed America’s domestic situation. He opined: “Today, no one is proud of being an American. When in America they chant, ‘Death to America,’ this means the rhetoric of the revolution has reached even America.”

Salami said the “fall” of America is “close.” He rebuked the U.S. for “not being able to manage the [COVID-19] pandemic” and said, “30 million hungry humans in America depend on government subsidies.”

Salami also said that “military options” for the U.S. are “closed” and a “war” is “ruled out.” He said the U.S. is instead pursuing “economic infiltration and psychological warfare.”

Salami also ruled out negotiations with the United States. He stated: “The path to our contentment is not through engagement with the enemy. Even if we reconcile with America, they will seek to hit us.”

Foreign Minister Zarif spoke at a ceremony at the Foreign Ministry commemorating the Iran-Iraq War. In his speech, Zarif sharply criticized Norway, Germany, and the U.S. for what he said was their support of Saddam Hussein during the eight-year-long war between Iran and Iraq.

Zarif also rebuked the U.S. again for the assassination of Qassem Soleimani, the late commander of the extraterritorial branch of the IRGC. Zarif declared: “You killed the number one enemy of ISIS. You hit him in such a way that only one hand of our commander was left. This is what you are, cowards and savages. But you have not been able to bring our people to their knees.” Zarif added: “You speak to us of being civilized? What you lack is civilization.”

The deputy commander of the IRGC Ali Fadavi discussed the cost of Iranian foreign policy in an interview with state television. Fadavi said that during the Iran-Iraq War, Iran spent $19.6 billion. He proclaimed that since 2006, Iran’s expenditure in the region has been “far less” than this amount.

Meanwhile, Yahya Safavi, a military aide to Ayatollah Khamenei, said after Fadavi’s remarks that Iran “gets back” whatever it has spent in Iraq and Syria. Safavi adds that Iran has received “cash” for “helping Iraq,” and that it signed “agreements” with Syria.

In the past, Safavi has also said that Iran is investing in Syrian “oil, gas, and phosphate mines.” Earlier this year, MP Heshmatollah Falahatpisheh also said Iran has spent between “$20-30 billion” in Syria over the past 10 years.