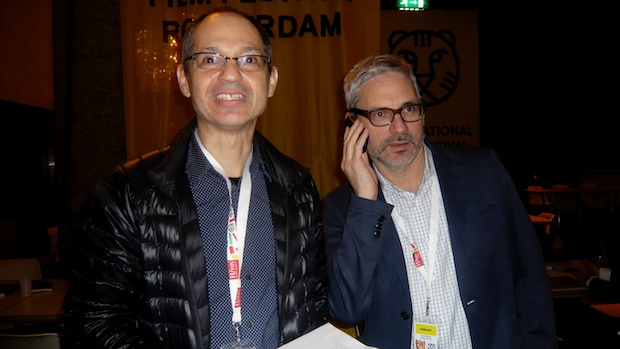 Born and raised in the United States, Caveh Zahedi is an Iranian-American filmmaker that found his inspiration in films as an outlet for his political interests and artistic expression. After graduating from Yale University with a degree in philosophy, Zahedi spent time in France pursuing his film career, eventually returning to the United States to attend film school at UCLA.

An independent filmmaker, Zahedi’s work is often experimental and explores a range of topics that challenge status quo thinking. As Zahedi himself states, he wants to push his audience, “to grapple with the ethical issues posed by the work.” He often immerses himself into his films as part of the subject matter, blending documentary, fiction, and re-enactments. His presence in his films are frequently self-reflexive and meta in nature.

For Zahedi, his Iranian identity was an important influence on his filmmaking, “Iranian culture that I grew up with made me not fit in with my peers, which is always good for storytelling.” The irony of the parallels in Zahedi’s work with those of Iranian auteurs such as Kiarostami, is that Zahedi became familiar with Iranian cinema after he began his career in films,

“I feel very close to Iranian cinema, but I feel that I discovered it after I started making films in that style already. So, I think that there is almost a genetic aspect to it. It is actually very weird how similar my films are to Iranian filmmakers such as Kiarostami and Panahi, and there are a few different filmmakers who sort of work in this documentary-fiction hybrid form that I also work in. I started doing that before I discovered their work and when I discovered it I was really like, ‘Wow, they are doing the same thing, that is very weird.’ So, I don’t know what it is, but it is weird.”

Zahedi recalls his visits to Iran as a child, “The last time I was in Iran I was 10 years old, but I love the food, exoticism, and the weirdness about the place. For me it was really strange and wonderful.” Despite his desire and attempts to travel to Iran in order to make a film, Iran’s government enforces strict restrictions on filmmakers. As he explains, the raw subject matter and style of his films are not welcome in his country of heritage,

“I was planning on shooting a project in Iran about 10 years ago. It was not focused on anything political. It was about horse racing in northern Iran. It was going to be a self-reflective film about going to Iran and making a film about horse racing, nothing politically related. But the producer had trouble with the government and her passport was taken away and then she was on trial and they basically told her that she could not work with me. She had a copy of one of my films in her apartment that is titled, “I am a Sex Addict”, they watched it and said that this guy is not welcome here.”

Though Zahedi is regrettably not allowed to make a film in Iran, he is still motivated by its culture. He is currently working on a project close to home for the Iranian-American community, a film about Rumi, “I love Rumi’s poetry, again I feel very close to it and Rumi’s poetry very much resonated with me. I feel like his mysticism embraces all of humanity, the good and the bad, and the light and the dark at the same time, and I like it. It is not moralism, it is very non-dualistic.”

Zahedi’s films are marked by the sort of open candor that defies an Iranian cultural proclivity towards saving face, his work challenges not only taboos within the Iranian-American community, but society at large. His advice for fellow filmmakers and hopes for his own work are to encourage that kind of frankness, “I would urge up-and-coming filmmakers to practice meditation in order to find an inner stillness from which their work can flow honestly and organically. I hope to inspire people to be more honest with themselves and with those around them.”