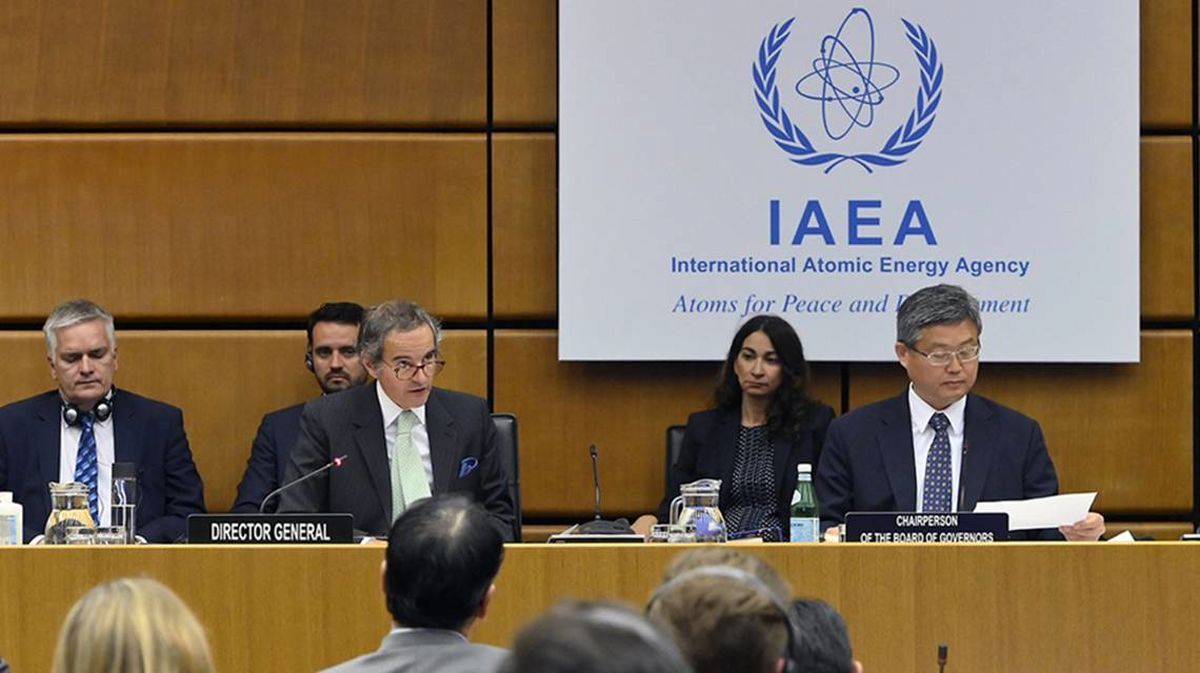 The IAEA’s Board of Governors on June 8 voted to pass a resolution censuring Iran. The resolution was introduced by France, Germany, the UK, and the U.S. and 30 out of 35 members of the Board of Governors voted in favor of it. China and Russia voted against, while India, Libya, and Pakistan abstained.

The resolution calls on Iran to cooperate with the agency on its investigation into three sites where nuclear activity is alleged to have occurred. Iran had warned it would retaliate against a censure and disconnected two IAEA cameras the day before the resolution was passed.

After the resolution was passed, Iran announced it would remove all IAEA cameras from its nuclear facilities that are not required by the nuclear nonproliferation treaty (NPT). Iran had previously allowed the cameras to be installed as part of the JCPOA. It remains a signatory of the NPT.

IAEA Director General Rafael Grossi confirmed on June 9 that Iran has started removing 27 IAEA surveillance cameras. He warned that if the cameras are not restored in three to four weeks, it would be a “fatal blow” to the JCPOA.

Meanwhile, Iran’s President Ebrahim Raisi declared on June 9 that his country will “not retreat one step” from its positions on the nuclear file. Iran’s foreign ministry also issued a statement saying that the IAEA resolution will “weaken” Iran’s cooperation with the agency and was the result of an “unbalanced [IAEA] report” based on “fabricated information” originating from Israel.

France, Germany, the UK, and the U.S. issued a statement supporting the resolution after it was passed. Israel’s prime minister and Saudi Arabia’s ambassador to the international organizations in Vienna also voiced support for the resolution.

France, Germany and the UK also released a separate statement calling on Iran to finalize a nuclear deal. They stated, “There has been a viable deal on the table since March … We regret that Iran has not seized the diplomatic opportunity to conclude the deal. We urge it to do so now.”

Russia’s Ambassador to the IAEA Mikhail Ulyanov publicly criticized the resolution. He stated: “Best case scenario, the resolution will be useless, but more likely it will complicate cooperation btw Iran & #IAEA, as well as situation at #ViennaTalks.”

Against this backdrop, Iran’s Foreign Minister Hossein Amir Abdollahian reiterated that Iran does not seek to build nuclear weapons. He stated, “”The United States and the West know that in the Islamic belief of Iran, the atomic bomb has no place and Iran is not looking for a nuclear bomb.”

U.S. Special Envoy to Iran Rob Malley tweeted that “Iran has a way out of the nuclear crisis it has created.” He added, “cooperate with the IAEA to resolve outstanding safeguards issues & agree to return to the JCPOA, thereby addressing urgent international non-proliferation concerns & achieving U.S. sanctions lifting. The choice is theirs.”

Iranian pensioners staged demonstrations across Iran on June 8. The demonstrations were staged after the government announced a 10 percent increase in the size of most pensions, which is less than what was widely expected.

Previously, Iran’s Supreme Council on Labor said the size of pensions should increase by 38 percent. In the face of soaring inflation, many Iranians working in government jobs have demanded higher wages. There have been numerous protests in recent years by pensioners, teachers, oil sector workers, and laborers in other industries.

Against this backdrop, Iran’s Supreme Leader Ayatollah Khamenei declared this week that Iran’s “enemies” are instigating protests to undermine the country. He added that “this calculation [by the enemy] is wrong.”

Many of the pensioners chanted slogans against conservative President Ebrahim Raisi. Among these were criticisms of his administration for lacking the necessary expertise to manage the economy.

Ali Akbar Eyvazi, a senior member of a pensioner union in Tehran, said the government took an “illegal” action by not following the ruling of the Supreme Labor Council. He said that increasing the salaries of pensioners by only 10 percent in current economic conditions is “unacceptable.”

The Iranian official in charge of investigating the collapse of the metropol building in Abadan has cited “numerous violations” for causing the incident. Koroush Hasirbaf, who was appointed to his post by the provincial government, blamed the owner of the collapsed building, Hossein Abdolbaqi, as well as the materials used to construct the building.

Parviz Sarvari, the head of the Supreme Council of Provinces, said the collapse of the building was an “engineering disaster.” He added that “we are witnessing a set of inefficiencies, violations, and abuses” and that “the share of blame in the collapse is very high.”

Meanwhile, Omid Khadari, Khuzestan province’s representative in the Supreme Council of Provinces, warned: “We have hundreds of metropol buildings in the province.”