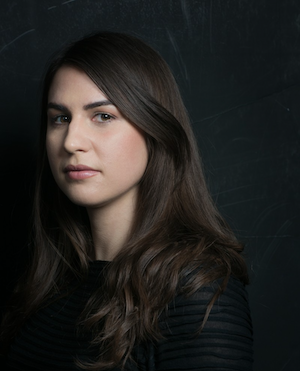 Author of the critically acclaimed book, Call Me Zebra, Azareen Van der Vliet Oloomi is a gifted young writer whose journey has taken her around the world — from the U.S., to Iran, to Italy and Catalonia, and all the way to the UAE. It is no wonder that for Azareen, language plays a key role in her creativity. In an interview with NIAC, Azareen shared:

“For me, language is an infinite, exquisite labyrinth. It is alive, constantly undergoing a process of metamorphosis. I am driven to explore its outer limits, to move toward its fringes… The stories we tell ourselves about who we are — the very grammar of those narratives — shapes our perception of self and world… That kind of rigor allows literature to have an impact on the social body: it is a vehicle through which our hidden sufferings, anxieties and indignities can enter the realm of public discourse. What drives me is the very path of writing, a commitment to that level of rigor.”

Azareen’s memories of early childhood experiences in Iran have a nostalgic character that many Iranian Americans can relate to:

“I have many memories of living in Iran and most of them are tender and violent at once. I remember picking cherries with my cousins so that our moms and grandmothers could make Albalu Polo (cherry rice); I remember playing hopscotch on the roof; I remember eating lavashak until my tongue was numb; I also remember raising my hand in protest at school when we were asked in dictation class to copy the story of Khomeini’s heroism five times. I was, of course, suspended, but it felt electrifying to call the exercise what it was: a brainwashing tool.”

For Azareen, her diverse languages and identities are parts of a whole that influenced her writing and outlook,

Call Me Zebra & Thinking About the Exile

“Call me Zebra,” says Bibi Abbas Abbas Hosseini to all those she meets as she prepares for and embarks on her Grand Tour of Exile. Zebra — the protagonist of Azareen Van der Vliet Oloomi’s PEN/Faulkner award-winning Call Me Zebra — embarks on a pilgrimage across the world after her father’s death, attempting to retrace her and her father’s original diasporic journey from Iran to Barcelona to the United States.

On her path, however, she confronts what it means to be an exile: one who is unable to truly return home and scarred by memories of her past.

“Every one of us in Iran is a hybrid individual best described as a residue of a composite of fallen empires,” Zebra’s father tells her very early on in the novel. “We, the people — varied, troubled, heterogeneous — have been scrambling like cockroaches across this land for centuries without receiving so much as a nod from our diverse rulers.”

The experience of this hybridity affects Zebra throughout the course of the novel, as she comes to terms with the traumatic memories of the war that pushed her family West — ultimately killing her mother and disconnecting her from her motherland.

Zebra finds her only solace in literature — her Matrix of Literature. To the casual reader, Zebra’s constant references to prominent authors and works may seem eccentric, maybe even erratic. However, to those familiar with the references, from Borges to Benjamin to Kafka, it is clear that Zebra is locating herself in this postmodern landscape of authors, revolutionaries, and thinkers.

Zebra’s journey after her father’s death is meant to follow her original experience of exile and bring her back to the land from which she, her father, and mother came — but she first must confront what that means.

“Will I ever return home? I turned that word — home — around in my mouth. It tasted like dust, ash, decomposed corpses, and simultaneously, like fresh mulberries, cherries ripened in the sun, rose water, pulverized saffron, dates.”

Zebra’s Iranian identity runs like an undercurrent throughout the course of the novel. She is never quite at home in New York or in Barcelona, and she lives with the knowledge of being disconnected, not only from the line of Hosseini’s, but also from the land from which they came.

This disconnection manifests itself in a kind of nihilism, as Zebra alienates herself from the people around her and chooses to turn inward in order to protect herself from the possibility of future loss. However, her Grand Tour of Exile forces her to confront the feelings of love and loss that she’s been running from. As she falls in love with Ludo Bembo, she also comes to terms with the loved ones that she has lost, those at the very root of who she is.

“When would Iran show its true colors? I wondered, sipping on my salty tears. Its ratified and stratified pluralism?” Zebra asks late in the novel. With Call Me Zebra, Azareen Van der Vliet Oloomi begins to let those colors show.