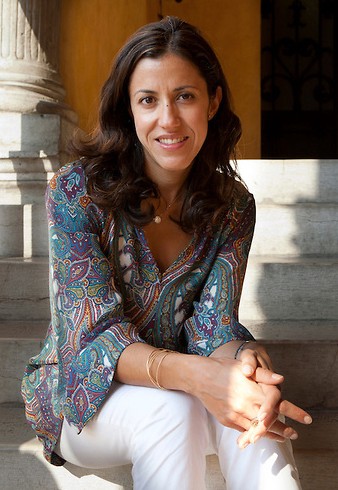 For two decades, Iranian American author Azadeh Moaveni has boldly covered the Middle East as both a journalist and a writer. Her work, much of which has been informed by her experiences traveling, studying, and living in the region, takes us beyond surface analysis and into a world that is too often caricatured in the West.

Her ability to navigate a dual identity as Iranian American and speak honestly about the state of affairs in Iran, is best exemplified by her 2005 memoir, fittingly named Lipstick Jihad. Azadeh’s work is both emotive and insightful, and is especially evocative to a generation of Iranian Americans who know all too well what it means to grow up “Iranian in America and American in Iran.”

When asked about the influence of her Iranian identity in her writing, Azadeh shared:

“I suppose it influenced everything from the very beginning, the places I wanted to explore and felt attracted or connected to, the need I felt from early on, probably before I even realized it, to develop some kind of wider worldview. So, I would suggest that my Iranian identity propelled me out into the world, partly because I always felt instinctively that the mosaic or multicultural façade of bi-cultural American identity was rather tinny. And then once I was gone, in Egypt first and then other parts of the Middle East, I felt released, really, and able to think and write from that same vantage point, but with a broader perspective.”

Azadeh has also experienced the constraints of her identity when writing:

“I never set out to write about identity and its tangles, although I realize I am rather known for having done precisely this… I initially had wanted to write a book of straight reportage about life in Iran, but my first publisher nudged me toward memoir, because it was perceived that was the best way to get Americans to read about a vexed, distant, misunderstood place. A memoir about a young Iranian-American living in Iran can go down no other pathway than identity, so that’s what happened.

Memoir is also very gendered — women write memoirs, men write travelogues, Americans write about themselves and want to see themselves in the mirror all the time, so you can see how a young Iranian-American woman would end up trapped in the identity memoir. Not that I regret writing those books or have some contempt for the first-person, and I certainly appreciate some basic truths I came to understand about migration and exile and memory… but I just feel there are more evolved forms, both at the level of theme and style.”

Identity is complex because while we are tied to it so strongly, we are also in many ways limited by it. To make matters more difficult, much of how our identity is understood is often shaped by the perception of others. Being Iranian American adds a further complexity as a consequence of the politicking of both sides. As Azadeh explains, even our sense of belonging can be called into question:

“I don’t even know how to talk about American identity anymore, because it seems, for people like us, an extraordinarily fragile presumption. What is the point of inhabiting or claiming any kind of Americanness, when in the space of one capricious presidency, Iranians can be reduced to internal enemies, their relatives banned, dehumanized in the eyes of much of the public and also rendered in many ways legally vulnerable?”

As U.S.-Iran relations deteriorate and conflict between the two escalates, Iranian Americans are particularly susceptible to its impact. When discussing her feelings about these recent tensions, Azadeh speaks with the brutal honesty and sharp analysis that her writing also demonstrates:

“I resent that every few years, when things get really tense, we all have to reveal the pain and difficulty that such a state of affairs causes for us and our loved ones. Having to perform being human as a kind of journalistic exercise is vile, mostly because it has no impact and therefore seems especially pointless.

Perhaps most of all the endless cycles of tension have made me deeply cynical about mainstream American journalism, which ultimately helps uphold the colonial relationship the United States has with the Middle East. I’ve covered the region for too long to feel any other way, and there is some solace in knowing that Iranians are not alone. Iran has suffered acutely for being intransigent in its rejection of the U.S. regional order.”

And make sure to check out the rest of our #IAAuthor profiles here!