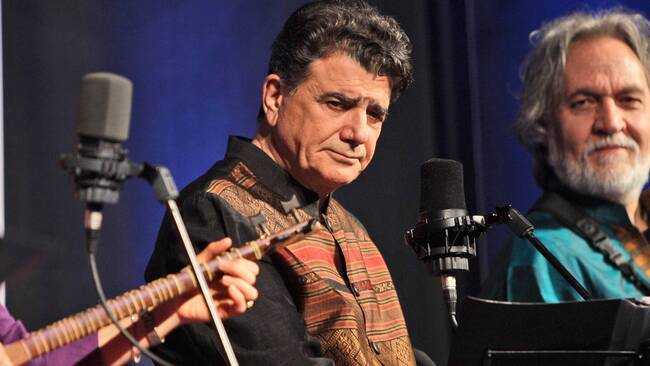 Mohammad Reza Shajarian, the famous Iranian traditional singer, passed away from cancer at the age of 80. In announcing his death, his son Homayoun Shajarian said a prayer procession would be held in Tehran’s main cemetery and then his body would be transported to Mashhad, his birthplace.

Homayoun said his father would be buried in the city of Tus in Mashhad province, near the tomb of the revered 10th century Persian poet Ferdowsi. In public statements, Homayoun expressed concern over people gathering due to COVID-19 and said he “cannot ask that people attend his funeral” but he also “cannot tell people not to come.”

Shajarian’s prayer procession in Tehran was attended by family, friends, and famous artists and some government officials, but not by the public at large. Homayoun said the public will be able to attend the burial ceremony in Mashhad.

Shajarian was one of Iran’s most respected and celebrated musicians. Countess Iranians grew up with his voice in their households and venerated him as a cultural icon. Tributes poured out for him from across Iranian society, from other artists, athletes, and politicians. Read NIAC’s statement on his passing here.

Shajarian was politically outspoken at times, leading him to come under a media ban in Iran for the last 10 years of his life. In 2009, after the contested re-election of Mahmoud Ahmadinejad, Shajarian was filmed at a protest where he chanted, “Down with Dictator.” At the time, he also requested that state TV stop airing his music. His last live performance in Iran was a concert in 2008.

Large crowds gathered outside the hospital in Tehran where Shajarian passed away. After some chanted political slogans, such as “down with dictator,” as well as slogans against state TV, Homayoun called on the crowd to refrain from political slogans. He said he does not want his father’s passing to become a “political issue,” and said “art is superior to politics.”

BBC Persian showed footage of security forces deployed at the hospital to reportedly disperse the crowd.

Shajarian’s father was a Quran reciter and he followed in his father’s footsteps during his youth. During the Shah’s era, he began working for state radio under the name “Siavash Bidkani” before eventually switching to his real name.

Shajarian and several of his colleagues resigned from state TV and radio in 1978 after the Shah’s security forces fired on protestors and killed over 100 in Tehran’s Jaleh Square. Shajarian sang famous revolutionary songs during that era, such as “Iran Ey Saraye Omid.”

After the revolution, Shajarian complained to authorities regarding widespread censorship. While his traditional musical style was permitted by authorities and he gained prominence, he did not go on state TV and radio until 1993. In a letter that year to the then-head of state TV Ali Larijani, Shajarian condemned “censorship of works of art.”

The new sanctions were condemned by Iranian officials such as President Rouhani and Foreign Minister Zarif. Rouhani described the sanctions as “oppressive” and “inhumane” and stated: “The Americans have done everything they can against the great Iranian people and with these inhumane and anti-human rights actions, they cannot break the resistance of the Iranian people.” Foreign Minister Zarif said on Twitter that the U.S. seeks “blow up our remaining channels to pay for food & medicine.”

However, Iran’s Central Bank Chief Abdolnaser Hemmati dismissed the sanctions as a “political-propaganda act with domestic aims.” Hemmati stated: “America’s new sanctions do not suspend the past waivers for medicine and critical goods. The banks that in this stage are subject to secondary sanctions still use SWIFT [the financial transaction system] and will continue their work to pay for critical goods.”

Hemmati also conceded that U.S. sanctions have put Iran in “dire straits” to attain medicine and food.” But he vaguely said that the Central Bank is using “special methods” to prevent a shortage of vital medicines.

The number of official daily COVID-19 deaths in Iran has hit new highs of over 230 for the past several days. Many parts of Iran are experiencing a new wave of infections, especially Tehran and its surrounding areas.

The increasingly dire situation led authorities to institute a new week-long shutdown in Tehran, which has since been extended for another week. The Iranian government has tried to balance a deteriorating economic situation with keeping the virus in check and has not been able to keep the economy closed for long periods.

Hospitals in Tehran are nearing their capacity or over capacity, leading the Health Ministry to prohibit “non-emergency” visits to the hospital. Iran’s Supreme Leader Ayatollah Khamenei has also instructed the military to make their medical facilities available for COVID-19 patients.

Human rights activist Narges Mohammadi has been freed after over five years of imprisonment. Mohammadi was sentenced to 10 years in prison in 2015 on charges of “propaganda against the state” stemming from her activism against the death penalty and human rights work.

Mohammadi’s sentence was reduced due to a new law passed by parliament earlier this year. The law commuted the sentences of prisoners by “one degree” to decrease their time in prison, according to BBC Persian.

Mohammadi was also imprisoned for two years in 2009 because of her activism. Her current sentence of 10 years was reduced because of the new law and this time that she served in prison earlier.

Mohammadi was infected with the coronavirus while in prison. Her affliction led to new calls for her release and the release of all political prisoners.

Backlash Over Cleric’s Comments about Women

Tabatabai-Nejad’s comments sparked widespread backlash on social media and some government officials and other clerics. Many said he was giving a license for attacks on women, such as a spate of acid attacks against women several years ago.

Several survivors of these acid attacks have publicly spoken out against Tabatabai-Nejad’s comments, including Soheila Jourkesh and Marzieh Ebrahimi. Ebrahimi wrote on her Twitter that “such threats against women must end, such efforts to make people afraid must end.”

Some government officials and other clerics, including Ayatollahs in Qom, also criticized Tabatabai-Nejad. For example, the Rouhani administration’s deputy telecommunications minister called on him to clarify what he meant and that he is not calling for physical attacks on women.

Another cleric, Ayatollah Ali Akbar Masoudi Khomeini, rebuked “harsh approaches” to enforcing hijab. He said that hijab should be promoted not through force, but as something a woman would want for herself.

After the backlash, Tabatabai-Nejad released a new statement saying there were “incorrect” interpretations of his remarks last week. He said that while he was talking about women who do not wear hijab, “no one has a right to physically hurt anyone” in this regard.

His comments led to speculation that the Guardian Council may allow women to run in next year’s presidential election. While women have tried to register to run for president in the past, most famously the late prominent women’s rights activist Azam Taleghani, none have ever been approved to run by the Council. The Guardian Council vets all candidates who seek political office in Iran in accordance with the Islamic Republic’s constitution.

The main issue concerning women seeking to run for president has been vague criteria written in the constitution. The document says that those seeking the office must be “rajal siasi” (رجل سیاسی), an Arabic word that some say means “political men,” but others argue means “political personalities.”

The authority to interpret “rajal siasi” is with the Guardian Council, which until now has barred women from running. However, women’s rights activists like Zahra Shojai say the main architect of Iran’s constitution, the late Ayatollah Mohammad Beheshti, never intended that women cannot run.

Shojai says gender was not meant by Beheshti to be a criterion for running for president. She says qualities like “competence” and “piety” were what Beheshti sought.

Faezeh Hashemi, the daughter of former President Hashemi Rafsanjani, described Kadkhodaei’s comments as “positive.” However, Hashemi, who is an outspoken dissident, said the Guardian Council must take a formal position on women qualifying as “rajal siasi” and being able to run for president.

Hashemi adds that there are many women in Iran who are qualified to run for president. She has discussed former government deputy ministers and vice presidents like Shahindokht Molaverdi and Masoumeh Ebtekar.

Despite Kadkhodaei’s comments, commentators have said a woman becoming Iran’s president is still far off. Many have highlighted that women still face restrictions on matters such as attending soccer matches and being able to travel abroad without the permission of a male relative.