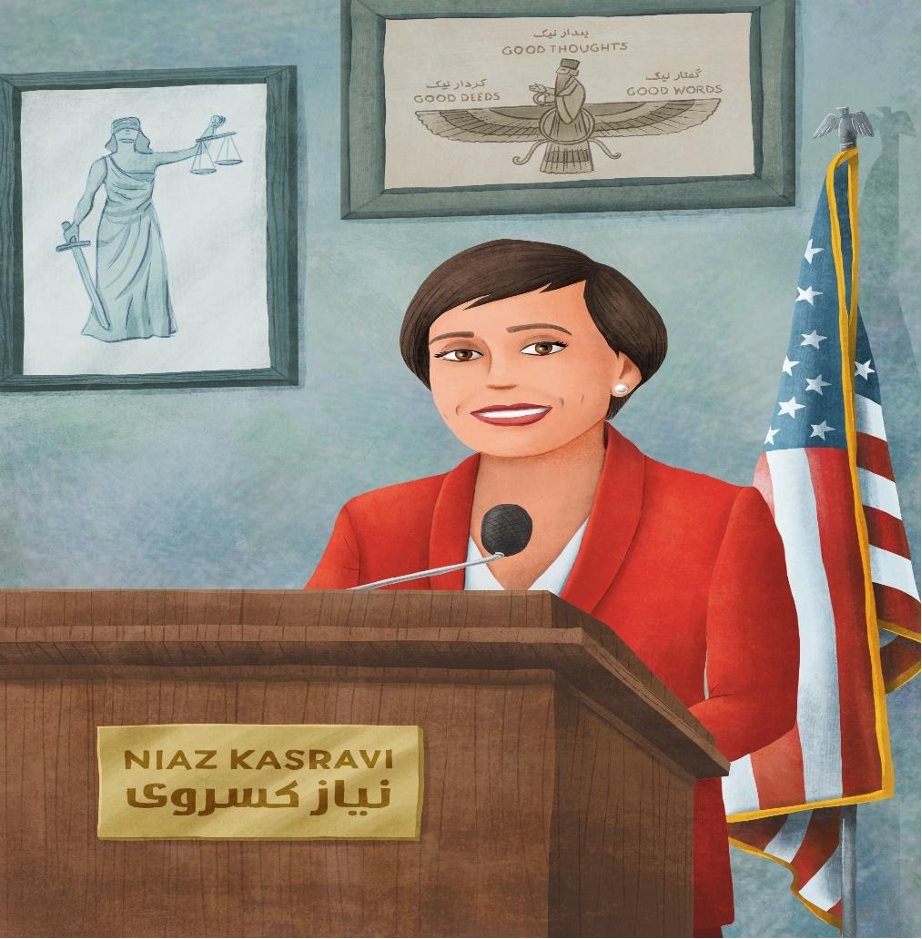 This blog post is an excerpt from Yasmine Mahdavi’s new book “Roots in Iran: Stories of Visionary Women.” Please make sure to RSVP for our upcoming book talk with Yasmine on March 31, hosted by the NIAC Los Angeles Chapter!

NIAZ KASRAVI was nine years old when she and her family moved to the U.S. from Iran.  By then, the shadows of the 1979 Revolution had passed, but the blaze of war between her country and its neighbor, Iraq, still scorched the land.

In her homeland, she had experienced feeling different as a Zoroastrian, a religious minority, amongst a mix of Muslims, the religious majority. She had been excused from mandatory weekly Islamic studies at school, but had to submit a document that showed she was studying the Zoroastrian religion. Fast-forward to her California college classroom, when her professor peeled away a new layer of her adopted country. That’s when Niaz became aware of inequalities in America. It was a surprise to learn that her new, beloved country was also tainted—that color, class, and creed could shape the trajectory of one’s life here too. Niaz yearned to learn and do more.

She studied Criminology, Law and Society. When she joined the National Association for the Advancement of Colored People (NAACP), a civil rights organization, she led campaigns to end racial profiling—the practice of using a person’s race or ethnicity to target individuals for a suspicion of a crime—in New York City. She also worked on wrongful sentencing cases, like that of John McNeil in Georgia.

Niaz’s most cherished memory was the look of hope two wrongfully convicted men gave one another after she successfully helped lead an initiative to abolish the death penalty in Maryland. In the spring and summer of 2020, she found the cascading social justice movements around the world to be encouraging.

Niaz believes in the best version of America. In the U.S., the right to dissent is invaluable.  She seizes this opportunity to help create a more just and equitable country for all of us.

It’s no surprise, then, to see her following her own passionate path, despite what others think. “Fitting in is overrated!” she says.