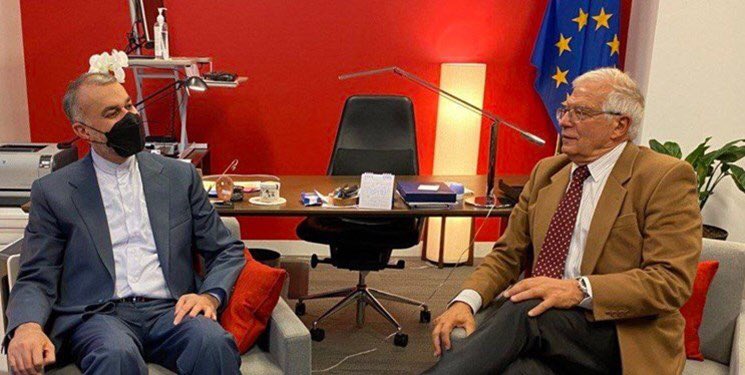 The EU announced that its foreign policy chief Josep Borrell would travel to Iran on June 24-25 “as part of efforts to bring the JCPOA back to full implementation.” Iran’s foreign ministry said Borrell would meet with Iranian Foreign Minister Hossein Amir Abdollahian and other officials.

Prior to the announcement, Borrell met with Rob Malley, the U.S. special envoy to Iran, and Enrique Mora, the EU deputy foreign policy chief, in Brussels. According to Borrell, Malley expressed that the U.S. still seeks to return to the JCPOA.

Iran’s Nour News, which is affiliated with the Supreme National Security Council, said it will have to be seen whether Borrell comes to Tehran “with a new and different message from Washington.” The outlet added: “Or if they will continue the previous approach of the White House and Israel playing  its destructive role in opposing the agreement.”

Earlier in the week, Russian Foreign Minister Sergei Lavrov traveled to Iran in his first visit to the country since the inauguration of President Ebrahim Raisi last August. Lavrov met with both Raisi and Foreign Minister Hossein Amir Abdollahian during his visit.

Lavrov said during a press conference with Abdollahian that both countries seek to boost economic and political relations. He said Iranian and Russian specialists are preparing a document on “strategic relations” between the two countries for the next 20 years. He also said that trade between Iran and Russia had increased by 80% in the past year to $4 billion.

Lavrov added that the JCPOA should be restored to its original 2015 form. He said all sanctions that violate the deal must be removed.

Meanwhile, Abdollahian expressed hope that the JCPOA talks will resume in the near future. The formal negotiations have been suspended since March, though the U.S. and Iran have continued to exchange proposals via the EU since then.

Abdollahian called for American “realism” to reach a deal. He added that Iran’s chief nuclear negotiator Ali Baqeri had “in the past hours” spoken with EU officials about restarting the negotiations.

Abdollahian also said that “war” is not the solution to the Ukraine crisis. However, Raisi said during his meeting with Lavrov that the U.S. and NATO are responsible for the conflict in eastern Europe.

The IRGC announced in a statement that Taeb would be replaced by Mohammad Kazemi, who previously headed the Guards’ counterintelligence unit. The announcement said Taeb would become an advisor to the IRGC’s top commander Hossein Salami.

Taeb has been removed amid criticism that the IRGC has failed to prevent foreign assassinations and acts of sabotage inside Iran. During his tenure, Iranian scientists and military figures have been assassinated and there have been multiple explosions at Iranian nuclear and military sites, amid other incidents that reflect foreign infiltration within Iran’s security services.

Taeb has also been sanctioned by the U.S. and EU for human rights abuses. He oversaw the arrests of many activists, journalists, dual nationals, and others on spurious charges. He was widely also accused of being overtly political and seeking to undermine reformists and moderates.

Taeb has been a member of the IRGC since he was 19 years old. He worked in counterintelligence during the administration of former president Hashemi Rafsanjani (1989-97) but was ousted after he reportedly pursued a case against one of Rafsanjani’s sons.

During the administration of former president Mohammad Khatami (1997-2005), Taeb worked in intelligence for the office of Supreme Leader Ayatollah Ali Khamenei. He was a supporter of former president Mahmoud Ahmadinejad (2005-13) during his first term in office and was appointed the head of the Basij paramilitary force in 2008.

Some conservative outlets inside Iran said Taeb was removed from his post because of “weaknesses & infiltration within the IRGC intelligence organization” and a failure to protect sensitive sites. Meanwhile, prominent reformist Ali Shakourirad said Taeb’s removal is a “very important” development. He added that the IRGC’s intelligence organization was created outside the law and has played a major role in elections, appointments, & in overseeing the affairs of the country.

Iran recorded an inflation rate of 12.2% in Iranian month of Khordad (May 22-June 21). This was the highest level of monthly inflation since the National Statistical Center of Iran began publicly releasing this data in 2002.

According to the National Statistical Center of Iran, food prices on average increased by 25.9% in the past month. Most of the increases were in vegetable oils, dairy and eggs, and some meats and breads.

The jump in prices comes after the government ended the subsidized exchange rate for imports of many goods, including food, in May. The general growth in commodity prices in the world due to the war in Ukraine and COVID-19 are also contributing to inflation in Iran.

The high inflation is occurring less than one years into Ebrahim Raisi’s presidency. The conservative president had promised to bring inflation down to below 20% within his first two years in office. Iran’s inflation rate by year’s end is likely to be higher than 40% if current trends continue.

Raisi’s administration cut subsidies in favor of making direct cash transfers to most of the population. However, the high increase in the price of many goods is leaving many Iranians worse off, though some portions of the population will come out ahead according to economist Djavad Salehi Isfahani.