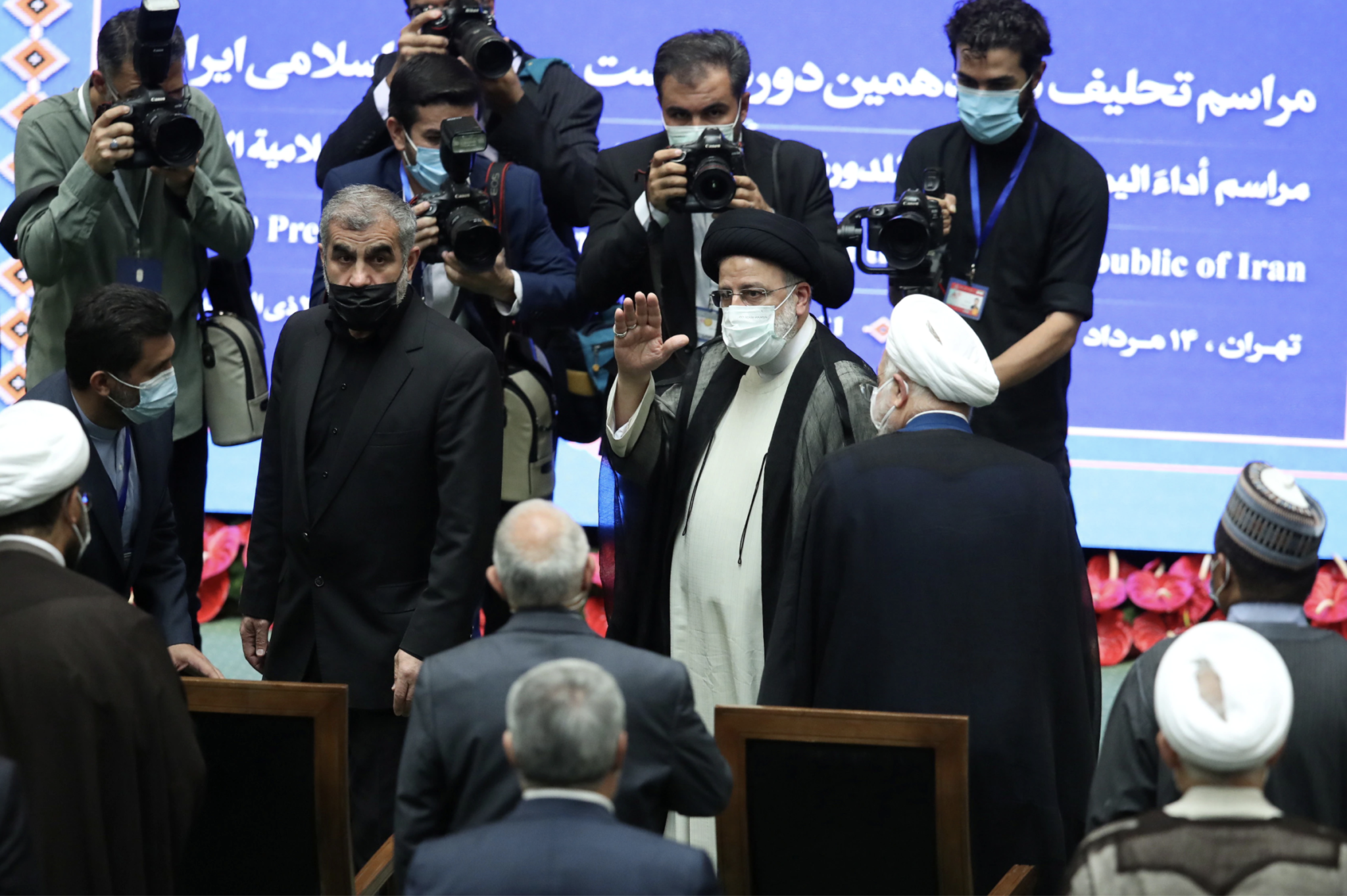 Ebrahim Raisi was sworn in as Iran’s next president at an inauguration ceremony in parliament. The ceremony was attended by senior Iranian political and military officials, including IRGC commanders, members of the Guardian Council, and the heads of the judiciary and parliament.

According to Fars News, representatives from over 50 countries also attended. This included the presidents of Iraq and Afghanistan, and the Prime Minister of Algeria. Enrique Mora, the EU’s Deputy for Political Affairs, attended as well along with a senior official from Italy’s foreign ministry. Other foreign guests who attended included: the head of Russia’ Duma, the foreign minister of Kuwait, Hamas leader Esmail Haniyeh, and Venezuela’s vice president.

In his remarks, Raisi said the Iranian people want “transformation and justice.” He stated: “We are the real defenders of human rights and will not be silent in the face of oppression and atrocities.”

Raisi added in this regard: “Whether in the heart of Europe or America, or in Syria or Yemen, we stand with the oppressed against oppression and atrocities.”

Raisi then talked about foreign policy and said he extends a hand of friendship to all regional countries, especially Iran’s neighbors. He said Iran seeks peace and stability in the region and its influence will be used to confront “hegemonic powers.”

Raisi said sanctions have harmed the Iranian people’s right to development. He called for the lifting of all sanctions on Iran.

Raisi said his administration would pursue “diplomatic plans” to end sanctions. Raisi ended that he will nominate cabinet members “next week” (the new week starts on Saturday in Iran).

On the eve of Ebrahim Raisi’s inauguration as Iran’s next president, Ayatollah Khamenei’s website published a video titled, “Lessons for the Future.”  The video for the first time showed a discussion in April 2012 between Khamenei and the late President Hashemi Rafsanjani, who at the time was the secretary of the Expediency Discernment Council.

Khamenei said Rafsanjani had been unable to give a response to his reasons for not pursuing relations with America. In the video, Rafsanjani agrees that he could not give any responses (i.e. could not rebut Khamenei’s arguments).

Rafsanjani says Rouhani, during the time he was in the Supreme National Security Council, had prepared this document on “the benefits and costs” of pursuing relations with the United States. However, Khamenei in the video at this point interrupts Rafsanjani and says the document contained “no costs, only benefits,” and that Rafsanjani himself had added a few more benefits in his own handwriting.

This video was published a week after Khamenei in a speech reprimanded Rouhani officials for “trusting the West.”

Outgoing President Rouhani in his final speech to members of his administration talked about Israel stealing nuclear documents from Iran in 2018. Rouhani stated: “The documents which, whether they are lies or not, the Israelis came and took and published, they took them to Trump and said with these documents you (Trump) must leave the agreement.”

Former Israeli Prime Minister Benjamin Netanyahu revealed in April 2018 what he said were documents “from Iran’s secret nuclear program.” Senior Iranian officials had until now neither confirmed nor denied that the documents were stolen. However, during this year’s presidential campaign, Mohsen Rezaee, the secretary of the Expediency Discernment Council and a presidential candidate, referred to nuclear documents “being stolen.”

During his last cabinet meeting, Rouhani also reiterated that Iran could have already had sanctions lifted and the JCPOA restored. Rouhani said that on January 3rd of this year, Ayatollah Khamenei gave the Rouhani administration about “what must be done” to restore the JCPOA.

Rouhani stated: “We could have, based on those instructions and that framework [given by Khamenei in January], implemented the JCPOA and lifted sanctions but we had problems elsewhere.”

Rouhani said if this hadn’t happened, his administration could have been ended under “better circumstances.” As explained in previous issues of Iran Unfiltered, Rouhani has blamed a law passed by parliament for preventing the JCPOA from being restored.

COVID-19 continues to take a devastating toll in Iran and the number of daily deaths is on a trajectory to reach record highs. Deputy Health Minister Iraj Harirchi says “90%” of Iranian cities are at a “red level” with COVID-19, which is the worst level in Iran’s categorization system for COVID’s spread.

Harirchi says if COVID-19 precautions are not taken by the population, the number of daily deaths will reach 800 in the next month to month and a half. He said only 39 percent of Iranians are observing COVID-19 health protocols.

Meanwhile, Health Minister Saeed Namaki wrote a letter to Ayatollah Khamenei asking for the country to be shut down for two weeks to confront the fifth wave of infections in the country. Namaki has also called for Iran’s military forces to be used to “strongly” confront people who violate health protocols.