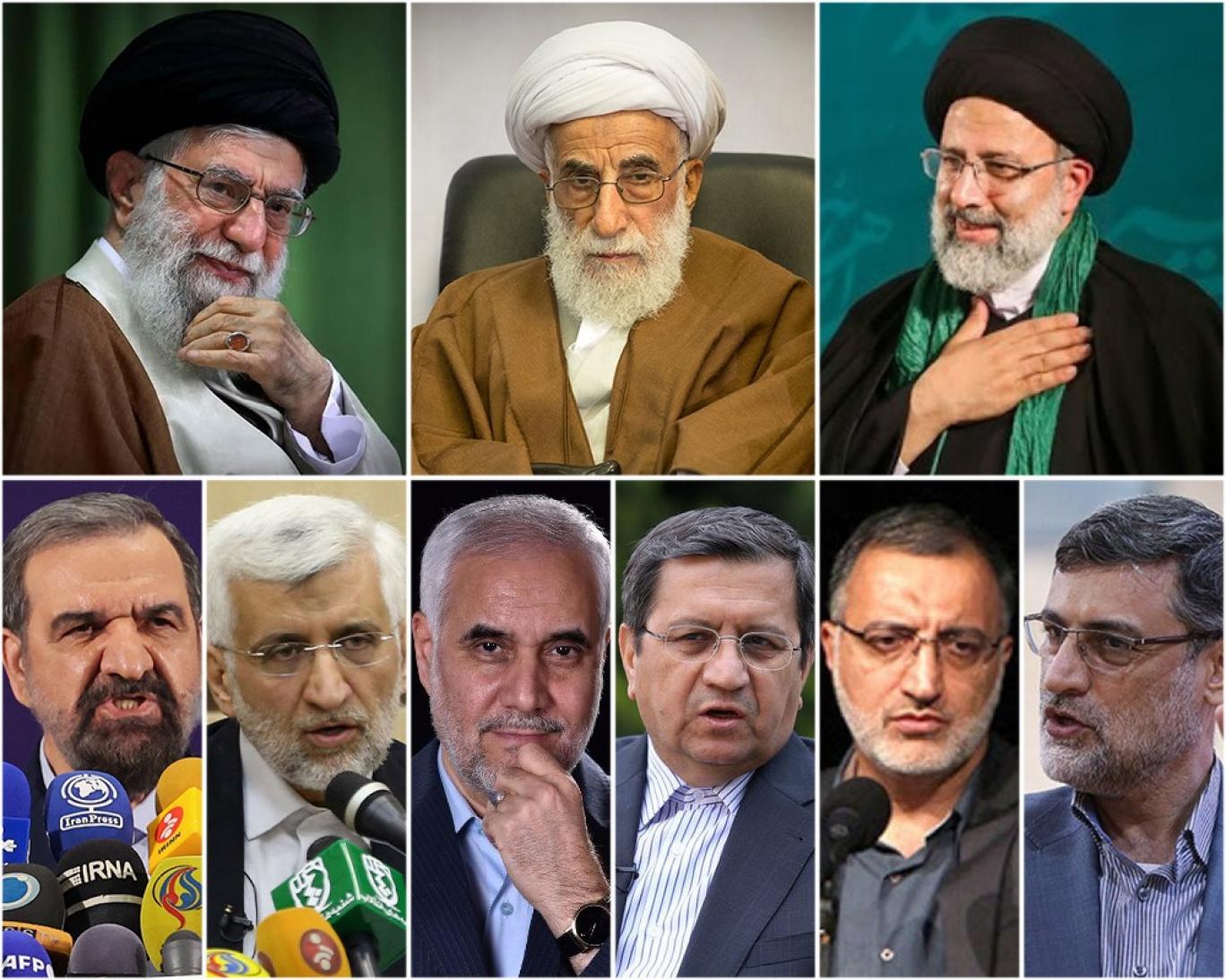 Week of May 24th, 2021 | Iran Unfiltered is a weekly digest tracking Iranian politics & society by the National Iranian American Council

The Guardian Council has approved 7 of the 592 individuals who registered to run for president. The approved candidates include none of the prominent moderates and reformists who registered. Ali Larijani, a former speaker of parliament who comes from the pragmatic wing of the conservative establishment, was also disqualified. (NIAC’s Senior Research Analyst Sina Toossi, the author of Iran Unfiltered, published two op-eds this week analyzing the Iranian election, which you can read in Responsible Statecraft and Foreign Policy.)

Ebrahim Raisi is the most prominent politician in the 7-man approved line up. The others include three avowed hardliners: parliamentarians Alireza Zakani and Amir Hossein Ghazizadeh and Iran’s chief nuclear negotiator during the Ahmadinejad presidency, Saeed Jalili.

Former IRGC commander Mohsen Rezaee, who ran unsuccessfully for president four previous times, is also a candidate. The other two are the centrist incumbent Central Bank Governor Abdolnaser Hemmati, and Mohsen Mehralizadeh, a reformist who in the past served as governor of Isfahan province and was an official in the Khatami administration.

Many figures with a history of holding senior posts in the Islamic Republic were disqualified. This includes former President Mahmoud Ahmadinejad and IRGC generals Saeed Mohammad, Hossein Dehghan, and Rostam Ghassemi.

The broad disqualifications spurred outrage among many ordinary Iranians and political figures. Many said the election would lack any serious competition and was being overtly handed to Raisi.

President Rouhani said he wrote a letter to Ayatollah Khamenei asking him to overturn some of the Guardian Council’s disqualifications. There is precedent for this in the 2005 election, when Khamenei issued a decree reversing Guardian Council bans against two reformist candidates.

Rouhani said the “life of every election is competition.” He said: “If this competition is taken away, it will become a lifeless election and a corpse.”

The “Reformist Front” coalition says all nine of the candidates it supported for the election were disqualified. The coalition said it supports no candidates in the election. In a statement, it said: “In a premeditated action the Guardian Council eliminated the representatives of every political persuasion except one. The Guardian Council’s main message is eliminating people from decision-making in the country’s affairs.”

The Reformist Front also said the disqualifications dealt a “severe blow to public trust and hope to reform affairs through elections and the ballot box.”

Hassan Khomeini, the grandson of the Ayatollah Khomeini, joined the host of figures rebuking the disqualifications. Khomeini was urged by Ayatollah Khamenei not to register to run for president himself weeks ago. He has now stated: “If I were one of the candidates that was approved, I would withdraw from the election. An administration that comes from such an election can solve no problems.”

Khomeini said taking away the people’s rights was “anti-revolutionary” and at odds with the system his grandfather established. He also said the Islamic Republic’s republican institutions were being done away with.

Reformist dissident Mostafa Tajzadeh reacted to his disqualification by calling the election “illegal and meaningless.” Tajzadeh cited the Iranian constitution in saying the Guardian Council’s action was illegal. Tajzadeh said he will do everything he can to “end the engineering of elections by the party of the barracks and to have free elections.”

Tajzadeh said the biggest obstacle to free elections in Iran is the Guardian Council. He said the “council’s members take the Iranian people’s money to guard the constitution but instead violate the people’s rights.”

Sadegh Larijani, a cleric and brother of Ali Larijani who is himself a member of the Guardian Council, also rebuked the actions of the rest of the council. Sadegh Larijani said that in his 20 years of being a member of the 12-member Guardian Council, he has never seen a decision that is as “indefensible” as the disqualifications for this election.

Ebrahim Raisi himself also said he was pushing for more candidates to be allowed to run. Raisi said the election should be “more competitive” and have a “higher turnout.”

Despite the protestations of Rouhani and others, Khamenei did not reverse the Guardian Council’s decisions and instead thanked the council. Speaking to parliament, Khamenei called for people to participate in the election and not “pay attention to those who say the election is useless.”

Khamenei added: “The Guardian Council in accordance with its duty did what it had to and thought was necessary.”

Khamenei also reprimanded individuals who are encouraging people to not vote. He stated: “These people don’t care about the people. Someone who cares about the people wouldn’t stop them from going to the ballot box.”

Khamenei also voiced strong support for the current parliament. This parliament was elected last year after similarly broad disqualifications of moderate and reformists. It is dominated by conservatives. He said this parliament reflected the “essence of the nation” and is “revolutionary and wise.”

Meanwhile, former reformist President Mohammad Khatami issued a statement saying the “republicanism” of the system was under “severe threat.” Khatami condemned the disqualifications and said they are part of an approach that has long existed but has gotten more overt and expansive.

Iranian Officials Say a Deal is Close in Vienna

The fifth round of negotiations between Iran and the other powers that negotiated the JCPOA began in Vienna on May 25th. Iran’s Deputy Foreign Minister Abbas Araghchi said after the JCPOA’s Joint Commission initial meeting at the onset of this round of talks: “The issues that remain to be finalized and decided upon are important. But they are less. In the previous rounds we made major progress on writing the text [of an agreement for all sides to return to JCPOA compliance].”

Araghchi added that differences over “key” issues remain in the negotiations, stating: “We can make progress in this round. But the issues that remain are still key issues and have to be decided upon.”

Araghchi said there must be “caution” about saying this will be the last round of talks in Vienna. He stated: “We must still speak with caution about whether this round can be the final round or not. We hope this [an agreement] can be achieved as soon as possible. But we seek an agreement that meets what we seek and our definitive positions, which we have expressed many times before.”

President Rouhani struck a more upbeat note, saying there is agreement on ending the “main sanctions.” Rouhani said an agreement could have already been reached. His words suggest differences within Iran on the level of sanctions relief it should receive, potentially over the U.S. de-listing the IRGC as a terrorist organization and other issues.

Rouhani stated: “Great work has been accomplished in the area of sanctions. I don’t want to say certain things, but sanctions could have been entirely ended by now. By all accounts, the main part of the sanctions are over in my opinion.”

Rouhani said if Iran agreed to incremental, step-by-step sanctions relief, this could have happened in February or March. He stated: “If we wanted to start part by part, for example lifting oil and banking sanctions and the rest gradually, this could have been done at the beginning of this year [the Iranian year, which began on March 21st] or even at the end of last year.”

Rouhani said it was Iran’s decision that an agreement on full sanctions removal be made all at once. He stated: “However, the agreement should be complete and implemented when it is complete. This is our decision. We decided that when everything is ended [agreement on removing all sanctions], then implementation should begin.”

U.S. Secretary of State Antony Blinken was asked about Rouhani’s comments that a deal was close. Blinken stated: “I think that would be news to us, because we’re now, I think, in the fifth rounds of talks in Vienna … it remains an unanswered question whether Iran is actually prepared to do what it needs to do to come back into compliance. The jury is still out on that.”