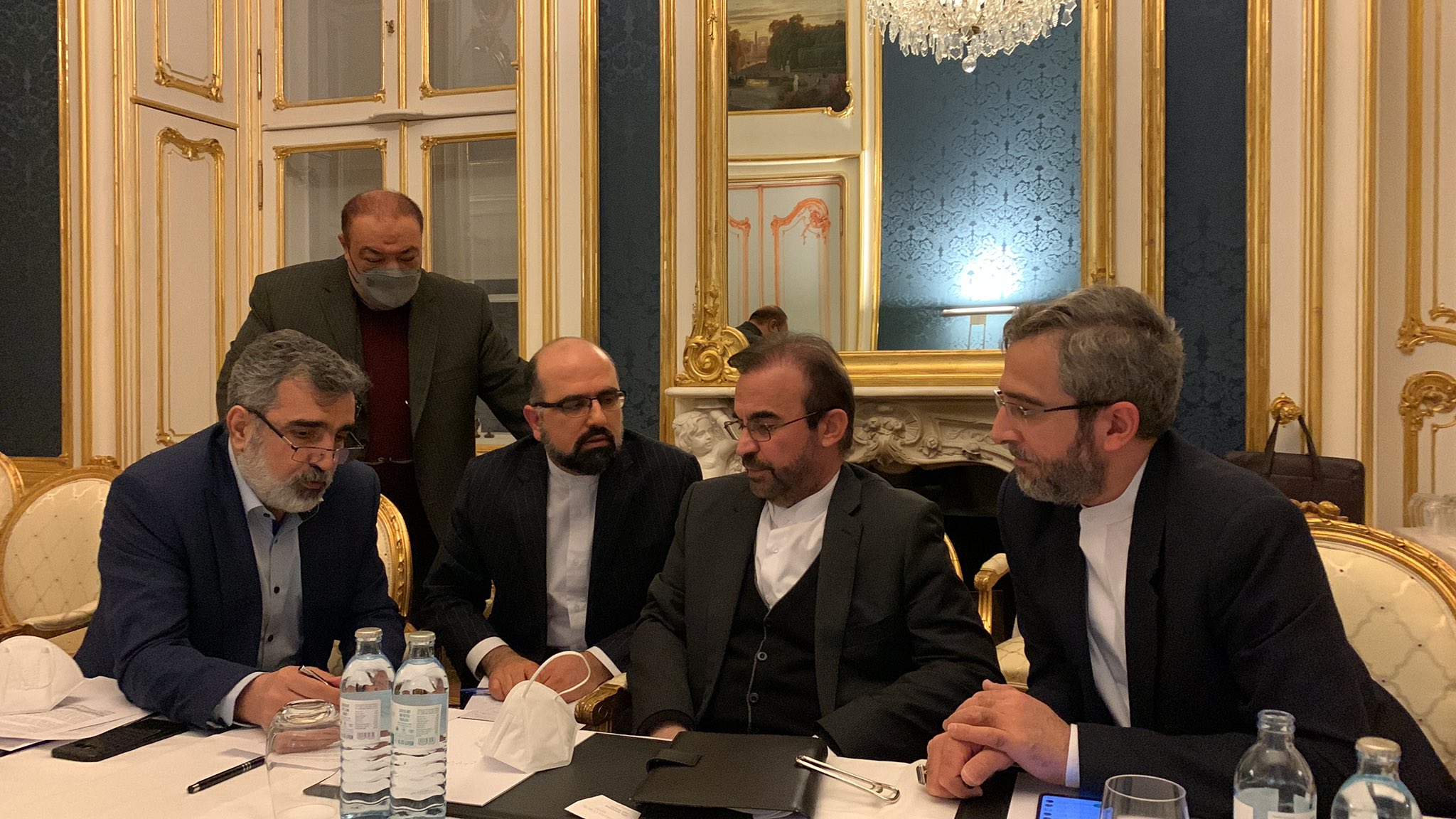 Vienna Negotiations “One Minute” from the Finish Line

After Bagheri returned to Tehran with the draft agreement, several hardline parliamentarians and newspapers criticized the would-be deal. The conservative newspaper Kayhan said “no deal is better than a bad deal” and that if Iran cannot get what it seeks, the Raisi administration must not “wait for the JCPOA” and must pursue a different diplomatic path.

Hardline MP Mahmoud Nabavian, who is a member of the far-right Jebhe Paydari political camp, said about the deal: “Maybe in the coming days a nuclear deal will be reached. But if we pay attention, what is desirable for the representatives and people of Iran is not in this agreement. If we had criticisms of the last government [Hassan Rouhani’s administration], it was not because it was personal.”Nabavian went on to say that the agreement would keep many U.S. sanctions on Iran.

Khatibzadeh said “98 percent” of differences were resolved in the draft agreement that Bagheri brought to Tehran. But he said some issues remain and that the Islamic Republic would not cross its “redlines.”

According to Euro News and other outlets, the IAEA’s investigation into past possible military dimensions (PMD) to Iran’s nuclear program is a key sticking point. The IAEA is actively investigating sites in Iran where it suspects undeclared nuclear activity took place decades ago and says Iran has not given satisfactory answers to its questions. Iran wants the PMD file closed and says the IAEA’s investigation is based on false information from Israel.

In response, Khatibzadeh said “bluffing will not work.” He added that all sides have alternative plans for the scenario of the negotiations collapsing but said that the “emptiness of any alternative for the U.S. has already been proven.”

Meanwhile, Rafael Grossi, the head of the IAEA, said he would travel to Iran on March 5th. Nour News, affiliated with Iran’s Supreme National Security Council, said Grossi’s trip could lead to a “road map” to resolve the IAEA’s safeguards issues with Iran. Nour News said if this occurs, it will remove one of the “main obstacles” to reaching a deal in Vienna.

Iranian journalist Reza Abbasi said the text of the final agreement in Vienna was complete and only the IAEA safeguards issue remains. He said if Grossi’s trip to Iran on Saturday is positive, a deal will be announced.

Russia’s envoy to the Vienna talks Mikhail Ulyanov also said the negotiations are “one minute from the finish line.” Separately, Ulyanov said a deal will be announced “Saturday, Sunday or even Monday. There are some small issues that are yet to be settled.”

Senior Iranian officials have blamed the U.S. for the Ukraine crisis but condemned the war. Initially, within one day of Russia’s invasion of Ukraine, President Ebrahim Raisi had a phone call with his Russian counterpart Vladimir Putin. Raisi told him: “I hope what is happening will be to the benefit of nations and the region.”

Days later, however, Raisi said Iran opposes “hegemony” as a “foundational foreign policy principle.” He added: “The Islamic Republic, while understanding security concerns related to decades of NATO expansion, emphasizes the national sovereignty and territorial integrity of all nations.”

Khamenei blamed the U.S. for being the “root” cause of the Ukraine crisis. He stated: “Intervening in the domestic affairs of that country, initiated demonstrations against the government, created velvet movements and a color coup, sending American senators into opposition rallies, removing one government, and imposing another, naturally led to this place [the Russian invasion].”

However, Khamenei said Iran supports “ending the war” in Ukraine. He did not mention Russia but said: “We are against war and destruction anywhere in the world. We don’t approve of the killing of people and destroying the infrastructure of nations. This is our consistent word.”

Amnesty International says that seven Iranian Kurdish prisoners are at risk of execution at Rajaie Shahr prison in the city of Karaj. Amnesty says they were “sentenced to death in grossly unfair trials marred by claims of torture to extract confessions.”

Iranian authorities say there were members of an extremist “Salafist group” and committed murder, among other charges. Amnesty says their lawyer was “barred” from speaking during their trial and the men were forced to sign confessions after being tortured.