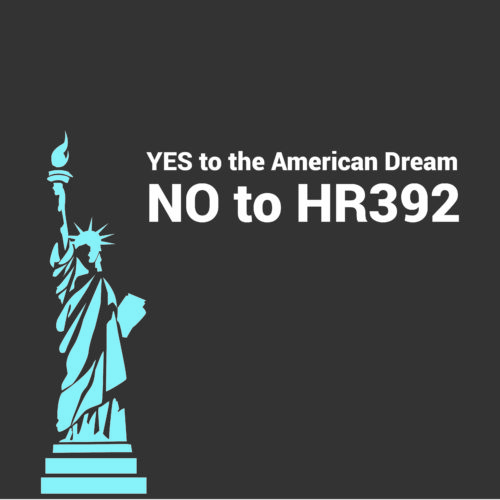 Contentious Immigration Bill H.R. 392 Unlikely to Pass Ahead of Midterms

Legislation that would significantly lengthen wait times for Iranian nationals to secure highly-skilled immigrant visas is highly unlikely to pass ahead of midterm elections in November, NIAC Action staff has learned in conversations with senior Congressional aides. In spite of this, the legislation continues to gain sponsors and it is possible for the measure to pass prior to the end of the year.

Many Iranian Americans have been deeply concerned that Congress would pass legislation – H.R. 392/S. 281, “The Fairness for Highly Skilled Immigrants Act” – as part of the annual homeland security appropriation bill. In light of existing administration policies targeting Iranians, including the Muslim ban, such legislation could have a highly negative impact on Iranian nationals pursuing the American dream.

NIAC Action has come out in strong opposition to its passage, lobbying key lawmakers against it, calling on corporations to withdraw their support, and working with NIAC Action members and other grassroots advocates to set up local meetings with Congressional offices to share their perspectives.

At the time of publication, there seems to be little chance for passage of H.R. 392 as part of the funding bill this month, particularly given general reluctance to tackle divisive immigration debates ahead of the midterm elections. H.R. 392 was inserted into the House version of the homeland security appropriation in committee, though it has not been added to the Senate’s version of the bill. To become law, the H.R. 392 language would need to be approved by both chambers of Congress and signed by the President.

Some legislators had hoped to finish the appropriations process prior to the end of the month, raising the prospect that a debate over whether to include H.R. 392 in a final spending package would take place. However, that timeline appears likely to slip past the November 6 elections. Funding for Trump’s border wall – which is supported by some of the prominent organizations, like Immigration Voice, that are backing H.R.392 – was also included in the funding package and is a debate most lawmakers want to avoid.

The delay will give both proponents and opponents of the measure more time to make their case, as it is unlikely to be decided until after Congress returns to session following the November 6 midterms. We will be tracking this issue closely and will continue to provide updates as the picture in Congress becomes clearer.