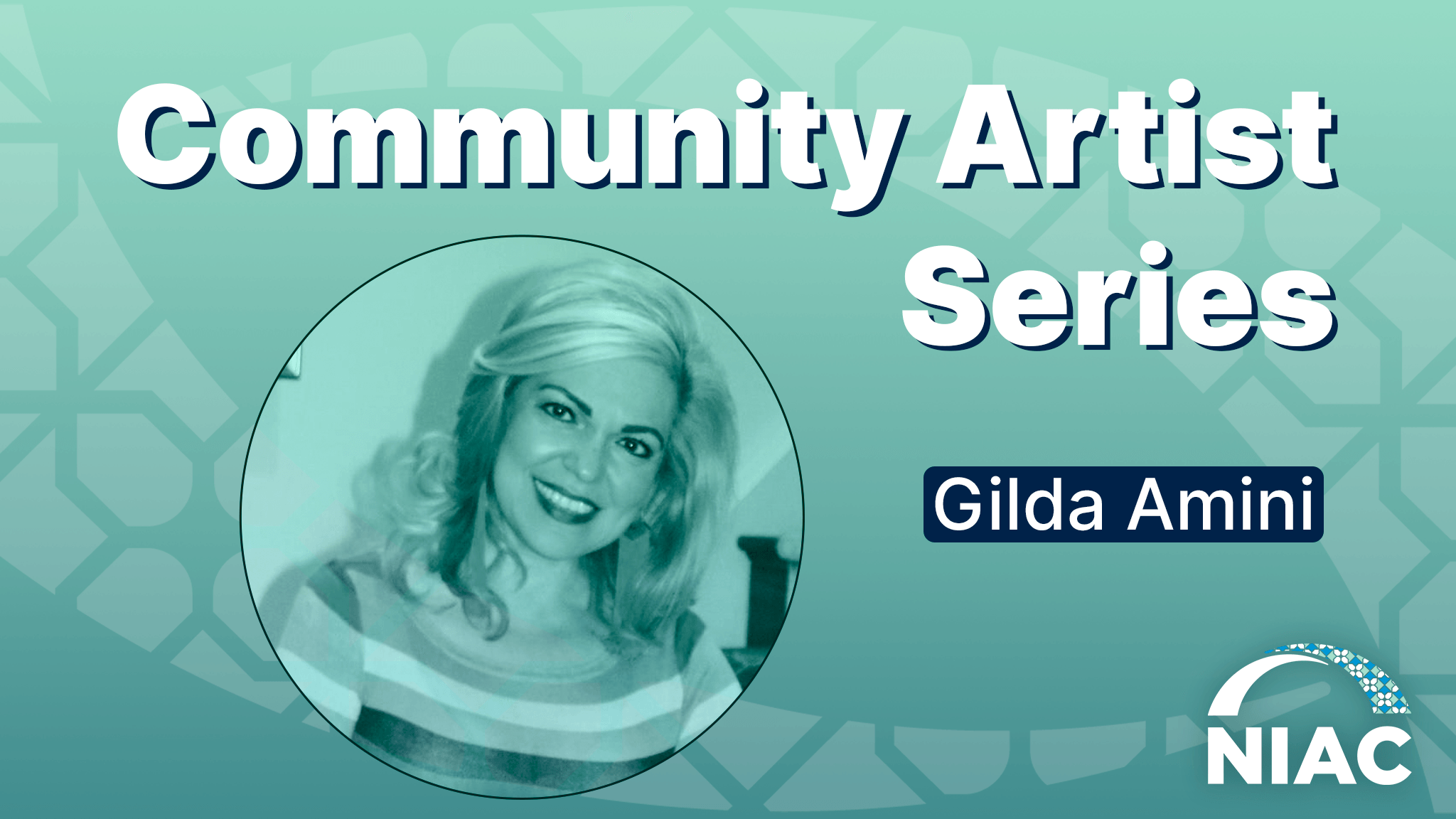 Art and culture are integral to the Iranian-American experience. We at NIAC are so grateful to the artists that performed at our virtual events since the pandemic began to help us virtually build community and celebrate our heritage. To show our appreciation, we’ve launching the NIAC Community Artist Series to spotlight singers, dancers, musicians, and other artists honoring our culture. Today, we are highlighting Gilda Amini! 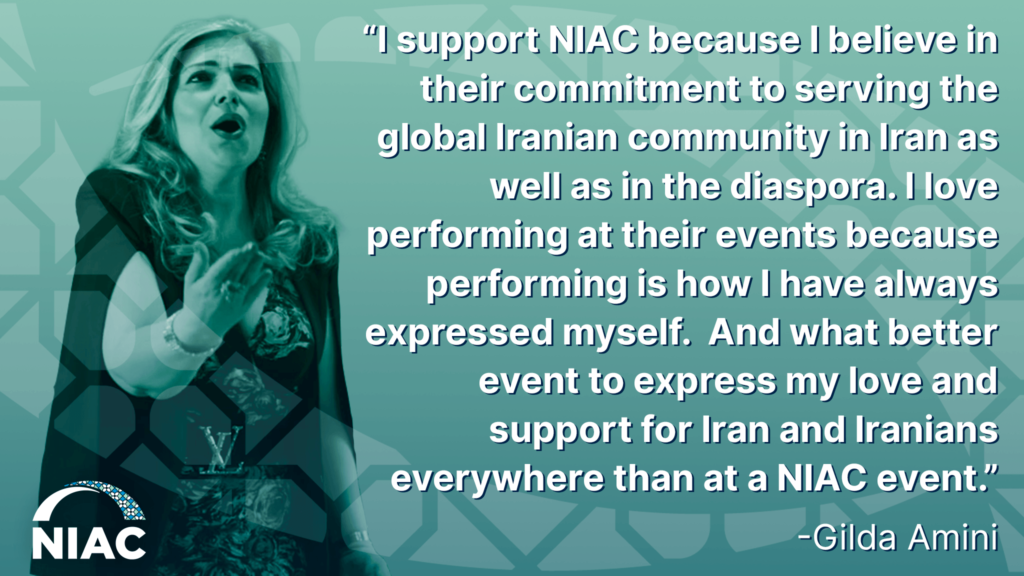 Gilda Amini is a practicing attorney in Chicago, former Director at the Chicago Persian School, and sings at The Persian Concert with the Middle East Music Ensemble director at the University of Chicago (MEME).

You can watch Gilda’s live stream performances by following her on Instagram. Check out her performance at NIAC’s Virtual Gala 2021 here.

Gilda’s interest in singing started when she saw Googoosh and Marzieh perform at a family event. As a 4 year old child, she was taking in the whole experience. In the middle of her performance, Marzieh wiped her perspiration with a flower — at first, Gilda was puzzled about that, but in retrospect, she thinks that was a very cool move. Afterwards, Googoosh arrived with all the kids on stage and Gilda remembers looking up at her and thinking that she wanted to be just like her. Several Iranian female artists like Delkash, Marzieh, Hayedeh and Mahasty have left an impression on Gilda, but for her, Googoosh has always been her number one idol because she beautifully conveys the story behind the song.

Gilda’s encounters as a child with famous Iranian singers didn’t stop there. Her mother once took her to an Ebi concert, and young Gilda was kicking and screaming, because she didn’t want to attend the concert. But when she heard Ebi singing “Shab Zadeh” or “Stricken by Night” from backstage, without music or a microphone, she immediately became curious about his work, and started playing every Ebi song, asking her mother about the meaning of every word and every sentence. Ebi is the reason why Gilda learned Farsi in the first place. Gilda applied her method of learning Persian through songs in her pedagogy. Years later, while serving as the Choir Director at the Chicago Persian School, Gilda taught her students Persian by dissecting the words and sentences in songs.

Gilda never wanted to sing songs the way the original singer sang it. Instead, she strives to give an interpretation or different version of that song, so that she can give it new life — especially if it’s an old song. With an orchestra, singers must of course learn the musical cues and technicalities. But before that process, Gilda sits with the lyrics, reads them as she reads poetry, and tries to understand what the lyricist is trying to convey. She listens to the original only a couple times, only to hear their interpretation, then tries to make her rendition of the song completely different. She then sings it to herself, and pays special attention to accompaniments like cues, keys, intonations, and breathing. In her creative process, Gilda has learned that phrasing and stressing one word or another completely changes the meaning of the message, so she tries to find different meanings from the original singer’s interpretation, so that she can bring a different perspective to the song.

In fact, after her performances many people ask Gilda if she’s written the songs that she sings, but actually they’re renditions of old songs by well-known singers like Marzieh and Viguen. She considers every song a story, and sometimes, she gets lost in it, and that’s why she rehearses each song so many times so she doesn’t miss a cue while enjoying the story of the song. And with a 50-piece orchestra, Gilda can’t afford to lose the cue because the song can fall apart if she does.  One of her favorite songs to sing with other musicians is Marzieh’s “Barg-e Khazan” or “Leaves of Autumn.”

Being a full-time lawyer, Gilda tries her best to balance singing with her full-time job. Her mom likes to tell people, “My daughter wanted to become a singer, but we made her become an attorney.” In fact, Gilda denied her passion for singing for many years until her daughter Ariana encouraged her to pursue an opportunity to sing with MEME. Gilda initially declined the invitation to sing with MEME, but then her daughter, who was 8 or 9 at the time, said, “You’ve always told us to push beyond our comfort zone! So why don’t you do it?” Just to save face from her daughters, Gilda attended the first rehearsal, and the rest is history. 12 years later, Gilda continues to sing Persian classics with MEME. The stage is where Gilda feels most happy.

Gilda is also famous in the community for her elaborate outfits when she sings on stage with MEME. In fact, her favorite audience is the MEME audience, because it’s so eclectic: it’s people of different nationalities and levels of familiarity with music. For non-Persian speakers, it gives them a new perspective of our music and culture. And so many people come up to Gilda after the concert who don’t know anything about Iran except in the media, thanking her for providing them a whole new perspective on Iran. When she sees people’s faces in the audience, Gilda says, “It just warms my heart to see their eyes lit up and see them so touched.”

Gilda’s intended audience isn’t a specific group, nationality, or music lover — just people that she can engage and connect with. Her daughter Ariana also encouraged her to launch an Instagram page specifically for Gilda’s music because so many people asked for recordings. Her Instagram has become very popular, becoming an enriching avenue and creative outlet. Gilda also receives many messages from people in Iran about how the posts and livestreams brighten their otherwise difficult lives.

Gilda also notes that there’s a stigma in Middle Eastern families against the arts. While families do encourage their children to pursue the arts as a side project, in general, it isn’t considered as serious, full-time profession as law, business, engineering, or medicine. For those interested in pursuing the arts, Gilda says, “You don’t need to be Barbra Streisand, you just need to be happy. I’m happy the way my life has worked out, and I didn’t always sing as much as I do now. I’m always trying to make time to sing! I suggest anyone who wants to follow in my footsteps to just go for it. And if they want to sing or play music on the side, study it as a science. There’s so much science and so much technique, it’s not as simple as singing along and doing karaoke.”

Gilda has been contacted by several songwriters and composers who want to compose music with her. In fact, she would love to do her original music and release an album of her renditions of Viguen’s songs. She feels blessed to live in a free country with her husband and children, but her heart always belongs to Iran, the source of her musical inspiration.