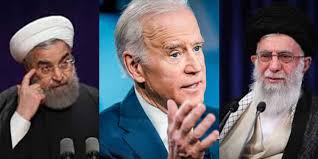 Calls for & Against Diplomacy After Biden Victory

President Rouhani reiterated his openness to restoring the JCPOA after Vice-President Joe Biden’s victory in the U.S. election. Rouhani implicitly said Iran would return to its commitments under the JCPOA if the U.S. does, stating: “The Islamic Republic of Iran has always adhered to its commitments when all sides responsibly implement their commitments and its strategy is constructive engagement with the world.”

Rouhani added in a separate speech after Biden’s victory: “Our aim is to lift sanctions and have constructive engagement with the world, and whenever and wherever there is an opportunity for this we will take actions for it. Nobody has the right to burn such opportunities and we will use these opportunities based on our national interests and national unity.”

Rouhani also said he issued new instructions to his ministers given “new international developments.”  He asked for a “comprehensive economic, political, social, and foreign plan commensurate with new international developments.” Last week, Rouhani had said plans were reached for the final nine months of his administration “without consideration for what will happen in America or who will be elected.”

Saeed Khatibzadeh, the foreign ministry’s spokesperson, said the U.S. cannot attach conditions to a JCPOA return. He stated: “America is not in the position to impose conditions on Iran, they caused billions of dollars of damages to the Iranian people.”

Khatibzadeh added: “The U.S. is fundamentally not in a position to set out conditions for anyone. The U.S. has violated the JCPOA, violated UN Security Council resolution 2231, imposed billions of dollars in damages on the Iranian people, and ended its participation in the JCPOA.”

Khatibzadeh then outlined Iran’s approach to returning to the JCPOA: “Based on the instructions of the Leader [Ayatollah Khamenei], America must repent. This means they must first accept what mistakes they made; second, end economic warfare against the Iranian people; third, reverse the path they have been on and implement their commitments; and in the fourth step compensate for the damages.”

Conservatives have begun criticizing Rouhani and his allies for their positions after Joe Biden’s victory. Many conservatives in Iran believe President-elect Biden will not differ drastically to Trump in his approach to Iran.

Fars News, which is affiliated with the IRGC, ran a piece attacking the Rouhani administration and reformists for favoring new negotiations with the United States. Fars News stated: “Even as it is just one or two days since the announcement of the official results of the American election and Biden’s victory, which Trump is casting doubt on and Biden has not yet been made president, over here the reformists and the Rouhani administration send messages to a White House without a president that Tehran is ready for negotiations.”

Fars News sharply criticized Mohammad Sadr, a member of the Expediency Discernment Council and a former deputy foreign minister under Javad Zarif. Sadr had told the Hamshahri newspaper that Biden seeks to return to compliance with the JCPOA if Iran does, which Sadr said was a “positive position.”

Sadr then added: “On the Iranian side there is readiness within the P5+1 and JCPOA framework for negotiations to restart so all sides implement their commitments under the JCPOA and as a result, all oppressive sanctions that were imposed by Trump are lifted.”

Fars News blasted Sadr as a “low-level” political figure and criticized Hamshahri for running an interview saying Iran is ready for negotiations. Fars News also attacked Rouhani for issuing an order to his ministers for a “comprehensive economic, political, social, and foreign plan commensurate with new international developments.”

Fars News stated: “The Rouhani administration in the coming months until the 2021 presidential election wants to implement its old slogan of ‘any deal is better than no deal’ and in this effort the reformists are clearly and urgently supporting him.”

The conservative newspaper Kayhan also ran several pieces attacking Rouhani and the prospect of negotiations with the United States under a Biden administration. Kayhan attacked Sadr as well, stating: “The comments of Mr Sadr are erroneous in several ways. First, Biden and his advisors have never clearly said they will return to the JCPOA by unconditionally implementing their commitments and lifting sanctions. To the contrary, they said Iran’s JCPOA commitments—which are decreasing—must be extended and that Iran accept non-JCPOA commitments.”

Shariatmadari also attacked Rouhani for seeking new negotiations with the United States, stating: “One can guess from their statements that they seek to yet again negotiate with America and impose another catastrophe like the JCPOA on the nation.”

Shariatmadari said negotiations with the U.S. will “never” occur. He then outlined three conditions for the U.S. to return to the JCPOA: “First lifting all the sanctions, second release all [frozen] Iranian assets, third, compensating for the damages than have been incurred by sanctions.”

Nasrin Sotoudeh, a lawyer and women’s rights activist, has been temporarily released from prison. Sotoudeh developed heart problems after being on hunger strike for over 40 days this summer. In September, she was transferred to a hospital for five days before being sent back to prison.

Sotoudeh was recently transferred from Tehran’s Evin prison to Qarchak prison, which is also in Tehran but only holds women prisoners. Reza Khandan, Sotoudeh’s husband, said she told him last week that there was an outbreak of Covid-19 in Qarchak.

Sotoudeh has now tested positive for Covid-19 since her release from prison. Khandan said in a post on Facebook: “Yesterday we went to the hospital for Nasrin’s heart problem. Before the heart test, it was suggested she have a test for the coronavirus. Today the result of her test was announced as positive.”

Khandan criticized authorities for taking Sotoudeh to Qarchak even as they knew of the unsanitary conditions there. He said: “The prison system knew about the unsanitary and disastrous situation at Qarchak. But without reason they transferred her there from Evin knowing she was very weak and exposed her to the virus.”

Khandan said regarding Sotoudeh’s health: “Her overall health is better since she ended her hunger strike, but she still has discomfort in her heart and shortness of breath.”

Meanwhile, the spokesperson for the judiciary also announced that 157 prisoners charged with “propaganda against the state” have been granted amnesty. The spokesperson, Gholam-Hossein Esmali, said the amnesty was requested by judiciary chief Ebrahim Raisi and approved by Ayatollah Khamenei.

The release of these political prisoners comes after Raisi recently issued a new edict on the rights of defendants in court and prisoners. Earlier this year, the judiciary had also announced that Ayatollah Khamenei agreed that prisoners charged with “Security crimes” who have sentences of less than five years are eligible for amnesty. The charge of “security crimes” is often used in Iran to imprison people on political charges.

Iran Further Expands Nuclear Program According to the IAEA

A new report from the International Atomic Energy Agency (IAEA) details further advancements in Iran’s nuclear program. Iran began gradually reducing compliance with the JCPOA’s limitations on its nuclear program in May 2019, one year after the Trump administration reneged on the deal and reimposed sanctions on Iran.

The IAEA report says Iran is continuing to enrich at the 4.5 percent level, above the JCPOA’s 3.67 percent limit. The report also says Iran’s stockpile of low-enriched uranium (LEU) has reached 2,442 kg, an increase of 337.5 kg since the agency’s last report in August. The JCPOA limits Iran to 202 kg of LEU.

The report also rebuked Iran for giving unsatisfactory answers regarding the presence of nuclear particles at an undeclared nuclear site that the agency inspected last year. The IAEA said Iran’s explanation about the particles was “not technically credible” and asked for a “full and prompt explanation from Iran” regarding the uranium particles.