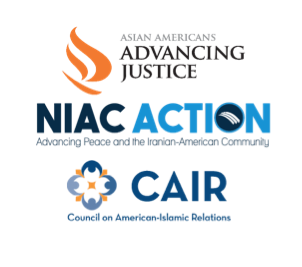 In May of this year, the Department of State (“DOS”) asked for and received permission to implement a temporary measure allowing it to collect vast amounts of information from certain individuals applying for U.S. visas. Some of the most troubling aspects of the collection include a new, mandatory requirement that applicants provide all social media platforms and handles used in the last five years, as well as a new requirement that applicants provide the details of their domestic and international travel history (including the sources of funding for the travel) for the past fifteen years.

The government now seeks to make that temporary proposal permanent, but before they can do so, they are required to solicit and accept comments from the public about the proposal. NIAC Action, Advancing Justice, and CAIR have developed web portals to assist the public in navigating the comment process, and strongly encourage impacted communities to make their voices heard. NIAC Action’s portal is available here.

“We were confronted with the brutal consequences of stoking fear and racial animus in Charlottesville, Virginia,” said Shayan Modarres, Legal Counsel for NIAC Action. “Keeping America safe and upholding our values as a country requires decent people to stand up and forcefully reject any discriminatory policy which treats people differently based on their race, nationality or faith. No matter the different ways that President Trump attempts to fulfill his campaign promise of banning Muslims from the United States, we will continue to expose his intent and do whatever we can to prevent a Muslim ban from becoming the permanent policy of the United States of America.”

“Even in the best of times, this kind of unfettered discretion and ability to examine religious, social, and personal beliefs expressed through social media would lead to a dramatic increase in racial profiling,” said Christina Sinha, Staff Attorney and National Security & Civil Rights Program Manager at Advancing Justice-Asian Law Caucus. “But in times such as these, when the government has unapologetically shown blatant animus towards Muslim and immigrant communities, this proposal can only add up to one thing: a Backdoor Muslim Ban.”

“The Trump administration’s push to make permanent discriminatory ‘extreme visa vetting’ is nothing more than a ‘Backdoor Muslim Ban.’ As a nation, we have resisted the president’s unconstitutional Muslim Ban executive orders by rallying at airports and suing the president – we must now make our voices heard once again in this public call for comments,” said CAIR Director of Government Affairs Department Robert McCaw. “Today, the primary targets of these proposed extreme visa vetting standards are people of the Islamic faith from Muslim-majority countries – tomorrow, these same vetting standards could be used against any minority community wrongly vilified as a threat to national security.”

NIAC Action, Advancing Justice, and CAIR are committed to combating this proposal and every attempt by the Trump Administration to target our communities.