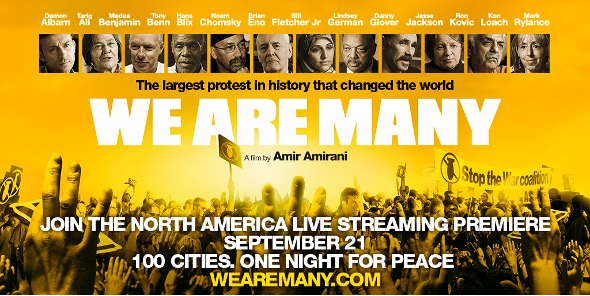 Amir Amirani’s Anti-War Film: “We Are Many”

NIAC is honored to join peace activists and organizations in partnership with We Are Many, to offer our members a chance to watch a timely and important documentary film about the largest organized anti-war protest in history. Directed by British-Iranian filmmaker Amir Amirani, the film tells a story of hope, unity, and the power of mass mobilization. Watch the trailer below and rent the film here!

In today’s political discourse we hear a lot about the idea of ending endless wars. From both sides of the aisle, Democrats and Republicans claim to want to bring troops home and end decades of military conflict that have cost the lives of thousands of American service-people, trillions of dollars, and immeasurable death and destruction in the Middle East. Despite being by far the largest military power in the world, Americans have lost their appetite for conflict. Though the antiwar movement in this country can be traced back to the days of Vietnam, no war has ever seen protests on a global scale as seen in the demonstrations against the invasion of Iraq in 2003.

17 years later, it is clear that the millions of people who vociferously objected to that war well understood the devastation it would unleash. For a generation of millennials, 9/11, the war on terror, and the invasion of Iraq shaped the world around them, the consequences of which have left an indelible imprint on our political outlook. But the war, and the movement for peace that it inspired, crossed all generational, religious, and ethnic lines. For a moment, on February 15th, 2003, the world was united as 30 million people, across hundreds of cities that spanned the entire globe, came together to raise their voices emphatically against war.

While some may see the demonstrations as a disappointment for failing to prevent the war in Iraq, we must remember that change is incremental. In 1963 JFK addressed a class of newly minted young graduates, he spoke of war as a problem that humans could solve with reason and spirit, stating, “Too many of us think it [peace] is impossible. Too many think it is unreal. But that is a dangerous, defeatist belief. It leads to the conclusion that war is inevitable, that mankind is doomed, that we are gripped by forces we cannot control. We need not accept that view. Our problems are manmade; therefore, they can be solved by man.”

The movement for peace endures to this day in efforts to bring troops home and stop another senseless war with Iran, which the policies of the Trump administration make all too possible. The mass mobilization against the Iraq war also encouraged other protest movements and calls for social justice that continue to be expressed by protestors of all stripes around the world.

Please join us in watching this moving film, which is sure to inspire a new generation of activists to seek justice, pursue peace whenever possible, and truly bring an end to endless wars.