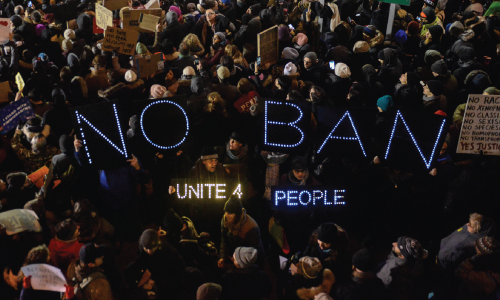 An up-to-date list of ongoing protests, lawsuits, as well as grassroots, corporate, and government efforts to stop Trump’s ban. The corporate world, government, independent organizations, and citizens of the United States have responded to Trump’s ban on Muslim-majority countries. Here’s some of what we have accomplished, and what we are continuing to accomplish in the coming days.

After reading this article: remember to contact your members of Congress about the Muslim ban. There are currently two pieces of legislation (one in the House and another in the Senate) that can stop Trump’s ban. Sign our petition and call your members of Congress (we’ve provided their contact information and a script) to let lawmakers know that there will be a cost if they choose to support the ban.

No Refugee and Muslim Travel Ban

No Ban, No Wall Rally at Texas State Capitol

Apple, Microsoft, and 95 other tech firms, from the largest in the nation to startups, have joined together to support legal fight against President Donald Trump’s travel ban.

Starbucks has promised to hire 10,000 refugees

Lyft has pledged to donate $1 million to ACLU

Washington State was the first to sue administration over the ban

Massachusetts is suing Trump administration on grounds that ban violates right to religious freedom.
Also, a Mass. federal judge intervened on behalf of two Iranian students who teach at UMass Dartmouth, preventing the government from enforcing the travel ban for seven days. The men have filed a lawsuit in Boston federal court; Mass. is backing this lawsuit

New York is also suing the Trump administration over the ban.

The Muslim Ban: How We Got Here and Where We Go Next