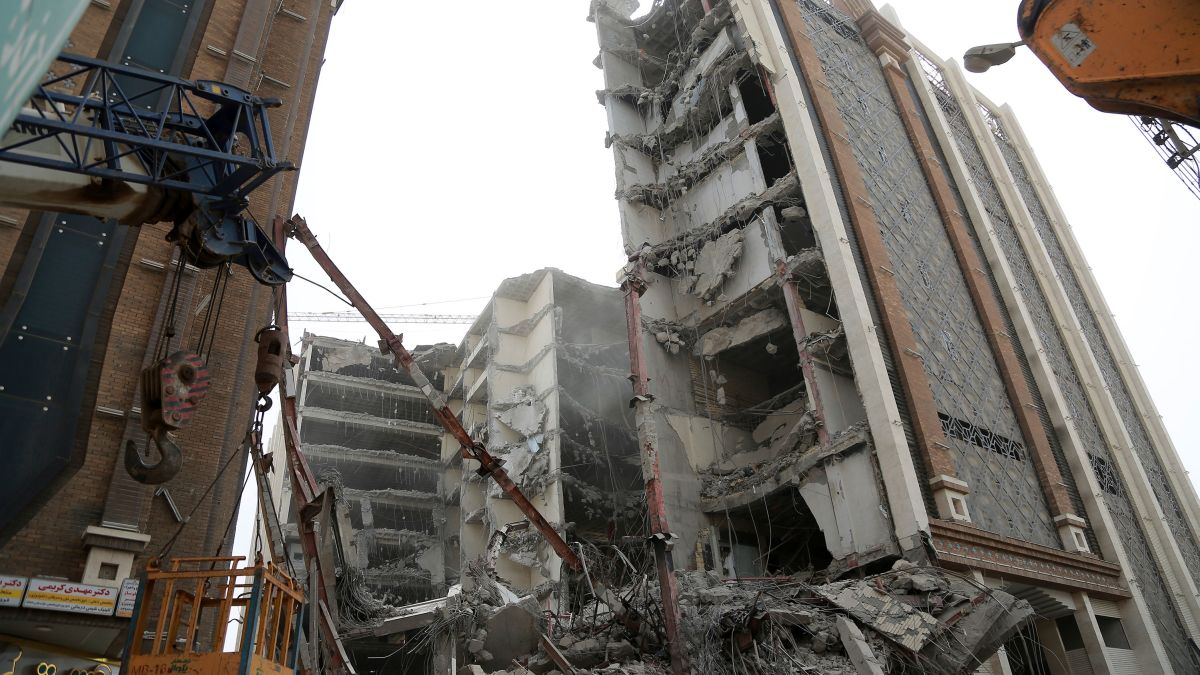 Week of May 30th, 2022 | Iran Unfiltered is a weekly digest tracking Iranian politics & society by the National Iranian American Council

The number of deaths from the “metropol” building collapse in the southwestern Iranian city of Abadan reached 38 as of June 1. According to the Abadan University of Medical Sciences, at least 38 people are still missing and believed to be under debris.

Search and debris removal operations have been underway since the building collapsed on May 23. However, the governor of Khuzestan province Sadeq Khalilian said on June 1 that the aim was to “end search operations today.”

Authorities have announced that the IRGC’s construction arm, Khatam-ol Anbia, will be in charge of demolishing the remnants of the building after search operations end. The organization has said it will demolish the building “in a way that does not add to the grief of the people.”

Meanwhile, protests have continued in Abadan and other parts of Khuzestan province over corruption and government mismanagement. Demonstrators have chanted anti-government slogans, including against Iran’s Supreme Leader Ayatollah Ali Khamenei.

Videos posted on social media showed anti-riot police deployed in Abadan and other cities in the province. In these videos, security forces can be seen firing tear gas to disperse demonstrators. There have also been reports of mobile Internet access being disrupted across Khuzestan province.

In this context, Ali Shamkhani, the secretary of Iran’s Supreme National Security Council, blamed “monarchists, hypocrites, and separatists” for “psychological operations” following the building’s collapse. This comes amid rumors that Shamkhani’s relatives were business partners with the owner of the metropol building.

Officials and many people in Abadan have blamed corruption and a failure to abide by construction codes for the building’s collapse. Khuzestan’s governor Khalilian said “technical” and “safety” standards were not met in the building’s construction.  He added that “this is known as one of the primary causes of the accident.”

The IAEA has said that Iran has not been cooperative in answering questions about four alleged nuclear sites in the country. A new IAEA report stated that Iran has not explained the origin of traces of uranium discovered at some of these sites. The report also said that Iran’s stockpile of enriched uranium is 18 times the limit of the JCPOA.

Against this backdrop, Iran’s Foreign Ministry Spokesperson said his country would have a “firm and appropriate response” to any “unconstructive action” from the IAEA. He also stated that “the IAEA’s new report does not in any way reflect the reality of Iran’s interactions with this international body.”

Mohammad Reza Ghaebi, the head of Iran’s mission in Vienna, also called on the IAEA to “realize the destructive consequences of publishing one-sided reports.” Iran’s Foreign Minister Hossein Amir Abdollahian also spoke about “technical cooperation” between Iran and the IAEA and said this “cannot be reversed by one hasty political comment.”

Abdollahian also spoke to EU foreign policy chief Josep Borrell on June 3 about the IAEA. He said a draft resolution prepared by the U.S., UK, Germany, France to censure Iran by the IAEA would make the nuclear negotiations “more difficult and complicated.” He added that such an action would “undoubtedly face a proportionate, effective and immediate response from the Iranian side.”

Meanwhile, Iran’s top nuclear negotiator Ali Baqeri traveled to Norway for talks on “lifting sanctions.” He said in a tweet that “serious and constructive talks on bilateral, regional and international issues” are on his agenda.

Iran’s rial currency has depreciated to its lowest level in 19 months. One U.S. dollar traded for 315,500 rials as of June 3.

Iranian analysts and economists attribute the depreciating value of the rial to several factors. This includes the psychological impact on the currency exchange market of recent protests in various Iranian cities, a reduction in the supply of foreign currency by the Central Bank, the stalled status of the nuclear negotiations, and Russia taking an increasing amount of Iran’s share in discounted oil sales.