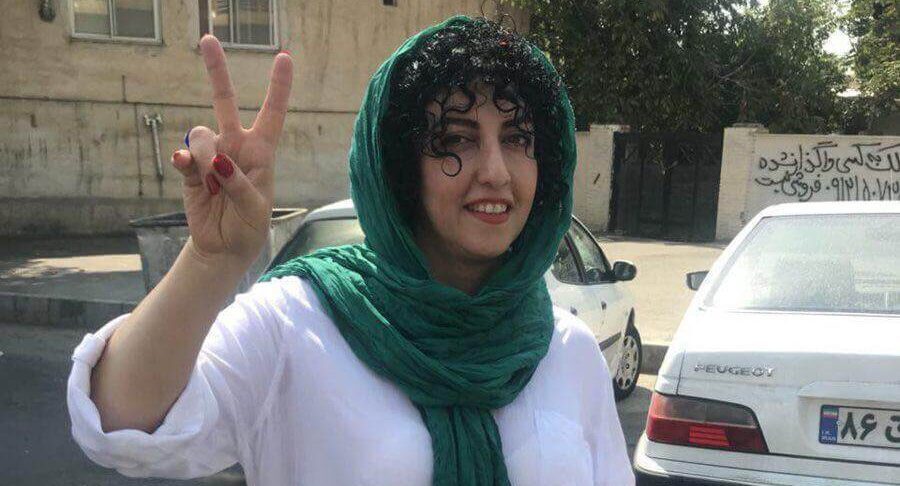 Prominent human rights defender Narges Mohammadi has been taken back to prison. Mohammadi was first released in October 2020 after being imprisoned for five years. She was arrested again in November 2021 after attending a ceremony commemorating the November 2019 countrywide protests, which the government brutally repressed.

Mohammadi was released from custody on February 3, 2022 for medical reasons. Amnesty International has stated that “for far too long, the Iranian authorities have subjected Narges Mohammadi to arbitrary detentions, unjust prosecutions, torture and other ill-treatment for her human rights work.”

Mohammadi’s husband Naqi Rahman said seven intelligence agents came to arrest Narges from her home this week. She was arrested along with Alieh Motalebzadeh, a news photographer.

Prior to her arrest this week, Mohammadi conducted an interview with the Washington Post. In the interview, she said the U.S. should “prioritize” human rights in its negotiations with Iran. She also said U.S. sanctions hurt the Iranian people more than the government.

Mohammadi is being taken to Tehran’s notorious Qarchak prison. Reporters Without Borders has said about the prison: “Qarchak is notorious for its appalling hygiene, which is contrary to all international human rights treaties.”

Mohammadi has been an outspoken opponent of the death penalty in Iran. She is the spokesperson for the Center for Human Rights Defenders, an organization founded by Nobel Peace Prize winner Shirin Ebadi.

Over one year has passed since negotiations began between Iran and world powers to revive the 2015 nuclear deal (Joint Comprehensive Plan of Action, or JCPOA). The first round of negotiations started in Vienna on April 6, 2021. This negotiating process in the Austrian capital has been suspended for the past several weeks amid continuing U.S.-Iran differences on returning to the JCPOA.

Iran’s Foreign Minister Hossein Amir-Abdollahian said on April 10 that U.S. demands in recent weeks are “maximalist” and go against the draft text of an agreement reached in Vienna. Abdollahian called on U.S. President Joe Biden to show “goodwill” to reach a deal.

Abdollahian appeared to offer a condition for direct U.S.-Iran talks to revive the deal. Until now, the U.S. and Iran have been negotiating via intermediaries in Vienna.

Abdollahian said there was “no benefit” to direct U.S.-Iran talks currently because the U.S. still has not taken practical action on sanctions relief. He said one action Biden could take to demonstrate goodwill would be to release some Iranian assets frozen abroad due to U.S. sanctions through an executive order.

The U.S. has reportedly not responded yet to a recent Iranian proposal on reviving the JCPOA. According to journalist Laura Rozen: “The anticipated U.S. counter-proposal would be in response to a proposal from Iran that European Union coordinator Enrique Mora brought to Washington early last week, which the U.S. considered completely unacceptable.”

The Washington Post reported the Biden administration is reportedly rejecting an Iranian demand that the Islamic Revolutionary Guard Corps (IRGC) be delisted as a foreign terrorist organization (FTO). However, a State Department official said this week President Biden believes the IRGC’s Qods Force, which is its extraterritorial wing, is a terrorist organization.  The official did not mention Biden’s position on the IRGC as a whole.

Meanwhile, 14 Republican senators wrote a letter to Biden warning him against removing the IRGC from the FTO list. The Republican Study Committee also translated a tweet from Republican Rep. Jim Banks into Persian, which said: “Iranian MPs should know… once the GOP takes back the House we will do everything in our power to overturn Biden’s restoration of JCPOA and reimpose max pressure sanctions.”

In contrast, over 250 MPs (out of 290) in the Iranian parliament wrote a letter to President Ebrahim Raisi demanding a “legal guarantee” that the U.S. will remain in the JCPOA. The MPs added that any deal must ensure no new U.S. sanctions will be imposed against Iran.

Amid increasing criticism of the negotiations by Iranian hardliners, Supreme Leader Ayatollah Ali Khamenei gave a speech this week defending Iran’s negotiating team. Khamenei thanked Iran’s diplomats for their “resistance” against U.S. “maximalism” and said Iran’s government should not “wait” on the results of the nuclear negotiations to proceed with developmental plans.

Iran’s Foreign Minister Hossein Amir-Abdollahian said an “initial agreement” has been reached on the timing and method of releasing Iranian funds blocked in a foreign bank. He did not mention the bank or the country the money would be released from.

Iran’s official IRNA outlet said $7 billion in Iranian assets blocked in two foreign banks would be released. The outlet said the transfer would happen in similar fashion to how the UK recently repaid an over $500 million debt to Iran. Of note, simultaneous with this payment, Iran released two British-Iranian citizens held on alleged national security charges.

Another Iranian source said three Iranian-American prisoners in Iran would be freed as part of the agreement to release Iran’s assets. These prisoners are Bagher Namazi and his son Siamak, and Morad Tahbaz.

Iran’s Foreign Ministry Spokesperson Saeed Khatibzadeh affirmed that in the “near future” a portion of Iran’s frozen assets abroad would be released. He did not give any more specifics but said a “foreign delegation” would travel to Tehran to facilitate this agreement.

It has been widely reported that roughly $7 billion of Iranian money has been frozen in two South Korean banks. Iran has long sought to repatriate the money, which is from Iranian oil sales to South Korea.

However, South Korea’s Deputy Foreign Minister said this week he has no plans to travel to Iran soon.