Traditionally for Iran, sports like wrestling and weightlifting are among the country’s proudest traditions and the Summer Olympics present the perfect opportunity for Iranian athletes to show what they can do on the international stage. Barring the 1900 Paris Olympics where Iran only sent a single athlete, Iran has medaled in every single Summer Olympics. In the 2020 Tokyo Olympics, the Iranian national team won 7 medals including 3 GOLD MEDALS! Read on for a recap of how Iranian athletes (representing Iran, the IOC, and other nations) performed!

This year, Iran sent 65 athletes to Tokyo to compete in 17 different sports. Javad Foroughi won the first gold medal, winning the Men’s 10-meter air pistol competition. The former nurse maintained his lead throughout the entire competition and eventually shattered the previous Olympic record scoring 244.8, becoming the oldest Olympic medalist in Iranian history. Foroughi wasn’t the only athlete who competed valiantly, however. Iran sent five other sharpshooters to Tokyo, several of whom ranked in the top-20 of all the competing athletes.

Iran’s basketball team returned to the Olympics after a twelve year hiatus and held their own against some of the world’s best teams in the United States and France, while also demonstrating an incredible show of sportsmanship in their second match against the United States. After the game, both sides congratulated one another for a game well-played, and USA Coach Grerg Popovich, widely considered one of the best coaches in the history of the sport, lauded the system that the Iranian coaches had installed, complimented the way the opponents ran their offense and wished Iran well after the game.

The men’s volleyball team played hard as well, representing not only their country, but their continent, as the only non-host team from Asia. The team won a five-set nail biter against Poland and cruised past Venezuela in three sets before ultimately losing three in a row against Canada, Italy, and Japan.

Milad Vaziri, Ali Aghamirzaei, and Saeid Safarzadeh inspired budding archers, canoeists, and cyclists everywhere by serving as the sole athletes for their respective sports. Matin Balsini swam his way into our hearts, setting a national record in the men’s 200m butterfly, while Nima Alamian dauntlessly competed as Iran’s only table tennis player in the 2020 Tokyo Olympics.

Nineteen of Iran’s twenty-two gold medals have come from either wrestling or weightlifting, as well as 62 of their 70 total medals across all Olympics competitions. Returning Olympian Ali Hashemi lifted 184 kg (and our hearts) competing valiantly in the Men’s 109 kg competition, and despite falling short in total points, being the only weightlifter to successfully complete all three snatch attempts. Ali Davoudi,  who holds the junior world records for both snatch and clean & jerk, amazed onlookers winning the silver and coming in second only to Georgia’s Lasha Talakhadze who set Olympic and World Records in one of the greatest Olympic weightlifting performances of all time. 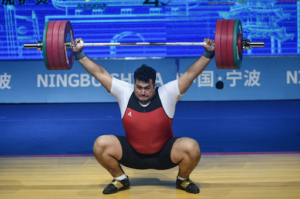 Greco-Roman Wrestler Alireza Nejati was the first Iranian wrestler off the board as all the other wrestlers remained in contention through the final week of competition. Mohammad Ali Geraei drew international attention with a last second flip of his opponent to wrestle his way into the bronze medal match but ultimately fell short. 97kg Iranian Greco-Roman wrestler Mohammad Hadi Saravi won another medal, clutching up a bronze n the 9-2 win against Finnish Arvi Matin Savolani. Asian Champion Mohammed Reza Geraei wrestled his way through some of the world’s toughest competition with ease defeating three of four opponents by five points or more and winning the final gold medal match by technical superiority, bringing Iran’s total medal count to four.

Despite this being the first Olympics with karate, Iran still managed to medal as Sajjad Ganjzadeh put his body on the line throughout several brutal karate matches, going undefeated throughout the group stage and ultimately bringing home the first ever men’s +75 kg gold medal.

Expectations were through the roof as Iran sent entrants in all six freestyle wrestling weight classes, but the amazing athletes still managed to exceed the astronomical pressure to win two medals. Of the six wrestlers Iran sent, three competed in a final medal match. Two-time World Champion and Rio Gold Medalist Hassan Yazdani wrestled the United States’ David Morris Taylor III for a gold medal in the 74 kg division, ultimately winning silver. Reza Atri came within inches of winning a bronze medal in his match with U.S. wrestler Tom Gillman. Heavyweight wrestling phenom 20 year-old Amir Hossein Zare, widely considered to be one of the best young wrestlers in the world, pinned a bronze medal, surely the first of many medals to come for a young champion whose career is just getting started.

The Tokyo Olympics marked a new milestone for female athletes in Iran. Iran sent ten female athletes to Tokyo, including Hanieh Rostamian, Iran’s joint flag-bearer at the opening ceremony and the first woman pistol shooter to win a World Cup medal. Of the seven sharpshooters, Iran sent to the Olympics, four of them were women as Rostamian was joined by Fatemeh Karamzadeh, Najmeh Khedmati, and Armina Sadeghian. Sorayya Aghaei became the first women’s badminton player to represent Iran in the Olympics, defeating Maldivian Abdul Razzaq before ultimately falling to China’s He Bingjiao. Farzaneh Fassihi placed 1st in the preliminary race of the women’s 100-meter tournament before coming in eighth in the next round of competition. Sara Bahmanyar, and Hamideh Abbasali became the first female karateka in Olympic history to represent Iran, competing through four difficult group stage matches. Nazanin Malaei, Iran’s sole rower put the hopes and dreams of her fellow countrymen and women on her back, making it to the finals before ultimately falling just short.  Nahid Kiani lost in the Taekwondo Round of 16 to Kimia Alizadeh who became the first woman to win a Summer Olympic gold medal for Iran in 2016 and is now competing as part of the IOC Refugee Team.

Iranians Competing for the IOC

Kimia Alizadeh went on to compete in the Taekwondo final before ultimately falling short to Hatice Kübra İlgün. Kimia was joined by Iranian athletes Saeid Fazloula, Javad Mahjoub, Hamoon Derafshipour, and Dina Pouryounes under the IOC banner. Fellow female Taekwondoin Dina Pouryounes was knocked out in the Round of 16. Saeed Fazoula was eliminated in the quarterfinals of the men’s K-1 1000 meters sprint canoeing event, while judoka Javad Mahjoub lost to the Czech Lukáš Krpálek who would go on to win the gold medal for the heavyweight judo division. Iranian karateka Hamoon Derafshipour fell just short, ranking third in the group stage and failing to qualify for the semi-finals. 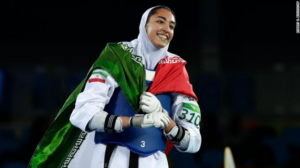