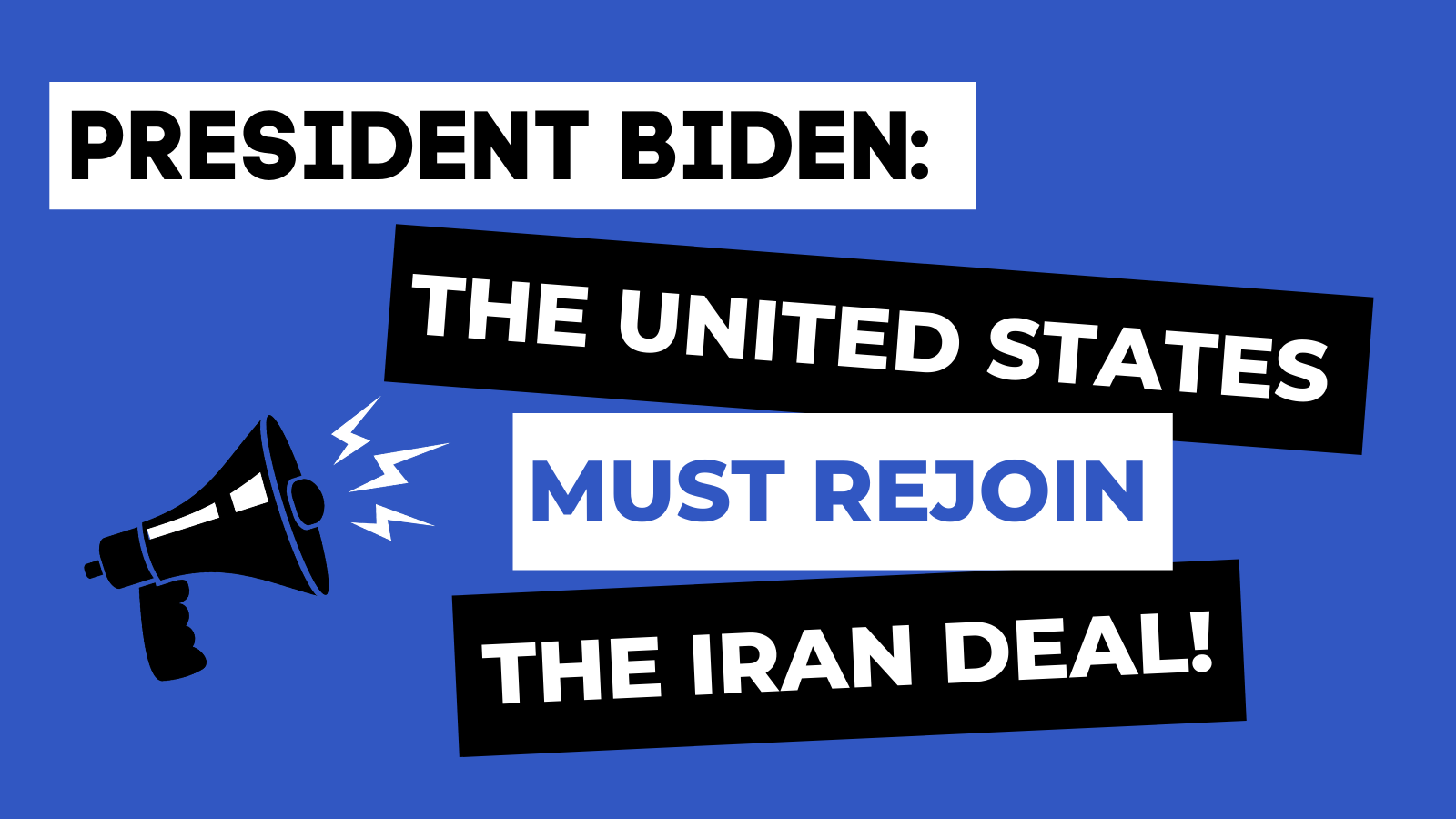 NIAC Action is proud to join 32 organizations, on behalf of the pro-diplomacy majority of the U.S. public, in sending a letter to President Biden calling for him to fulfill his campaign promise to move swiftly to rejoin the Iran nuclear deal. The full text of the letter can be found below.

We write to strongly encourage you to follow through quickly on your commitment to rejoin the Joint Comprehensive Plan of Action (JCPOA), the Iran nuclear agreement. This was one of your most important and unequivocal promises during the campaign, one shared with every other major Democratic primary candidate, and one that was an important sign that you were prepared to move U.S. foreign policy away from the reckless, belligerent unilateralism of Donald Trump.

As you wrote in a piece last year, Trump’s policy of “maximum pressure” on Iran has been “a dangerous failure.” It created a cycle of escalating  tensions in an already volatile Middle East, brought Iran closer to having a nuclear weapons capability, and led to increased suffering for the Iranian public. Just as importantly, it isolated us from our closest allies in Europe and weakened the global consensus that President Obama and his administration had forged and mobilized so effectively around the challenge.

The longer the elements of “maximum pressure” remain in effect, the more it will continue to embolden hardliners and make U.S.-Iran diplomacy more difficult. The recent escalation in military activity  between the United States and reported Iranian proxies in Syria and Iraq only shows how urgently needed a new course of action is.

We have been heartened by various developments over recent weeks, including the U.S. accepting an invitation from Europe to join talks on the future of the deal, the acknowledgement that Trump’s attempted snapback of UN Security Council Resolutions failed, and the lifting of travel restrictions on key Iranian officials. Likewise, we are encouraged by the appointment of Robert Malley, an extremely capable diplomat and skilled negotiator, to the position of Special Envoy for Iran.

However, we are concerned about the time that is being taken in the lead-up to formal negotiations and by recent statements that could be construed to indicate that Iran must take the first steps to meet its JCPOA obligations before the United States takes its own steps. We support your policy of “compliance for compliance,” but the fact of the matter is that the United States was the first to violate the deal. It is therefore reasonable to expect the United States to at the very least take concurrent steps with Iran to rejoin it.

In doing this, you will have the strong support of our coalition, but also of a Democratic Party which is overwhelmingly unified behind the policy of rejoining the JCPOA. As the 2020 Democratic Party platform stated:

“We believe the Joint Comprehensive Plan of Action (JCPOA) remains the best means to verifiably cut off all of Iran’s pathways to a nuclear bomb. The Trump Administration’s unilateral withdrawal from the JCPOA isolated us from our allies and opened the door for Iran to resume its march toward a nuclear weapons capacity that the JCPOA had stopped. That’s why returning to mutual compliance with the agreement is so urgent.”

We recognize that this is a challenging political environment. There is an extremely well-funded faction of hawkish former officials, activists, and members of Congress who oppose the very idea of diplomacy let alone any deal with Iran, regardless of the details. But, as President Obama correctly pointed out in 2015, “many of the same people who argued for the war in Iraq are now making the case against the Iran nuclear deal.” We understand the need to build political support for this policy. We stand ready to help engage a U.S. public that overwhelmingly supports diplomacy. The most important and effective support for your efforts will come from those who have worked in support of U.S.-Iran diplomacy for years,  not from those who have opposed it  and been so consistently and disastrously wrong about the key foreign policy questions of the 21st century.

We also know that the JCPOA is the opening of a conversation, not the end of it. By restarting diplomacy on a road already traveled, the U.S. will better be able to tackle many other concerning policies of the Iranian Government through diplomacy. “Maximum pressure” was always a way to justify collective punishment of people in Iran for the actions of their government, a particularly cruel policy given the public’s limited ways to truly change their government’s policies. We fundamentally believe that the Iranian people should shape the future of their government and that siege tactics don’t foster pathways to democracy but rather strengthen the hands of authoritarian leaders already in power. To truly address these concerns, we should rely on the proven, successful track record of engagement and diplomacy modeled by the JCPOA.

We urge you to move as quickly as practically possible to choose diplomacy with Iran and rejoin the JCPOA.