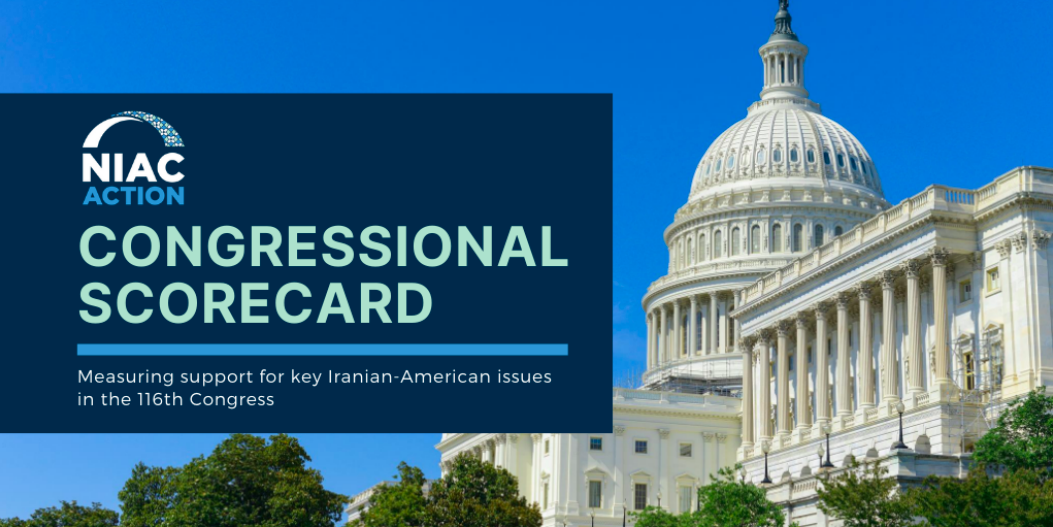 The 116th Congress considered many issues of importance to the Iranian-American community, including the Muslim ban that has separated Iranian Americans from their loved ones and bills to block the Trump administration from starting a war with Iran without Congressional approval. The following scorecard reflects how each legislator performed in advancing peace and diplomacy with Iran, securing equitable immigration policies, and protecting the civil rights of all Americans by focusing on key votes, bills, and letters.

For legislation we supported that received a roll call vote, we assigned a score of +1 for voting in favor, 0 for abstention and -1 for voting against. For letters and legislation that did not receive a vote that we supported, we scored +1 for co-sponsorship and 0 for failing to cosponsor. The reverse would apply to votes or legislation that we opposed. Two pieces of legislation received double weight – Senator Kaine’s war powers resolution (S.J.Res. 68), which passed out of Congress and was vetoed by President Trump, and the NO BAN Act (H.R. 2214/S. 1123), which was passed out of the House but did not receive a vote in the Senate.

Table Rubio Amendment (S.Amdt.1320 to S.J.Res. 68): a motion to table an amendment that asserts the US is not currently engaged in hostilities, as contemplated by the War Powers Resolution, against Iran.

Cruz Amendment (S.Amdt.1301 to S.J.Res. 68): an amendment that commends the U.S. Armed Forces for a successful mission against Iranian General Qassem Soleimani.

Defund Muslim Ban (H.R. 810 & S. 246): prevents funds and resources from going towards any federal agency to enforce orders related to the Muslim Ban

NO BAN Act (H.R. 2214 & S.1123): limits the authority of the President to restrict immigrants from entering the United States, prevents the President from making immigration-related orders on a discriminatory basis, and increases Congressional oversight of newly instituted travel bans.

Lee JCPOA Reentry (H.Res. 495): Calls on the United States and Iran to return to full compliance in their commitment to the Joint Comprehensive Plan of Act nuclear agreement (JCPOA) and calls on all parties to avoid conflict.

Udall War Powers (S. 1039): prohibits funds from being used for kinetic military operations against Iran unless Congress authorizes such an action.

Udall-Kaine (S.Admt. 833 to S.1790): prohibits unauthorized military operations in or against Iran.

Khanna-Gaetz No War With Iran (H.R. 2500): an amendment on the National Defense Authorization Act (NDAA) FY2020 prohibiting unauthorized military force in or against Iran.

Slotkin War Powers (H.Con.Res 83): the bill calls on the President to terminate the use of United States Armed Forces to engage in hostilities in or against Iran.

Khanna No War With Iran Act (H.R. 550): prohibits the obligation or expenditure of federal funds for any use of military force in or against Iran unless Congress has either declared war or enacted specific statutory authorization for such use.

Access to Counsel (H.R. 5581): provides various protections for covered individuals subject to secondary or deferred inspections when seeking admission into the United States.

Omar-Lee-Grijalva Humanitarian Letter: sent to U.S. Treasury Secretary Steve Mnuchin expressing deep concern on the impact that U.S. sanctions are having on access to medicine in Iran—particularly for individuals suffering from chronic, advanced, or rare diseases.

Jayapal-DelBene Letter: sent to the U.S. Department of Homeland Security (DHS) “to obtain more information regarding the holding of Iranian Americans in secondary inspection upon entering the United States in Blaine, Washington”