Graham and Netanyahu pressure Obama to ratchet up war rhetoric 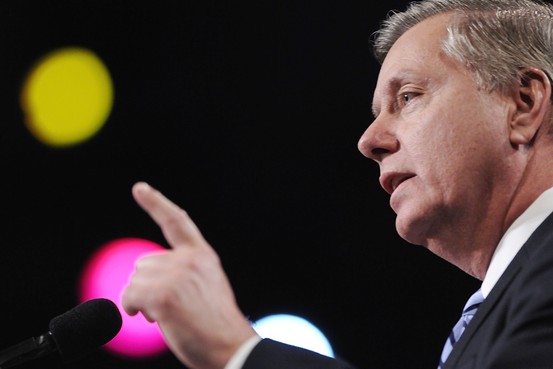 On Saturday, Senator Lindsey Graham reportedly “stunned” attendees at a Halifax International Security Conference when he called for a military strike that would “neuter” the Iranian regime “not to just neutralize their nuclear program, but to sink their navy, destroy their air force and deliver a decisive blow to the Revolutionary Guard.”
NIAC addressed the bellicose remarks with a statement warning that, “Graham’s confrontational war rhetoric sets back America’s opportunities to resolve the Iranian nuclear issue peacefully and prevent a third costly and destabilizing US war in the Middle East.”
Meanwhile, that same day, Israeli Prime Minister Benjamin Netanyahu was in New Orleans advocating to Vice President Joe Biden that, in spite of all of the sanctions the US had put in place over the past year, the Obama Administration needed to start doing more saber rattling:

Israel’s media says the country’s prime minister has told U.S. Vice President Joe Biden that Iran must be made to fear a military strike against its nuclear program.
They say in their Monday editions that Benjamin Netanyahu told Biden that although sanctions have hurt Iran, Tehran will be determined to produce nuclear weapons unless it thinks a military strike is a real option.

This all comes just a week before proposed nuclear negotiations between Iran and the P5+1 approach, and is just the type of toxic rhetoric, coming from both the US and Iranian sides, that poisons the environment for successful diplomacy.
Defense Secretary Robert Gates, who is apparently less willing to callously issue war threats and pledge American troops to a third Middle East war, took exception to the saber rattling on Monday:

“I disagree that only a credible military threat can get Iran to take the actions that it needs to, to end its nuclear weapons program. We are prepared to do what is necessary, but, at this point, we continue to believe that the political-economic approach that we are taking is, in fact, having an impact on Iran,” he said.

But the debate is symptomatic of a discussion going on in Washington, in both the White House and on Capitol Hill, as to whether the US should start raising the war rhetoric against Iran.  Returning to the Bush era of name calling and saber rattling would effectively guarantee that the Obama administration continues solely down the pressure track, rejects opportunities for a successful peaceful resolution to our issues with Iran, undermines Iranians fighting for the rule of law, and locks the US into a trajectory for war.
The Obama administration is reportedly mulling whether to ratchet up belligerent rhetoric towards Iran, according to the New York Times:

Two years into office, Mr. Obama has organized an impressive sanctions regime and managed to combine diplomacy and pressure better than many experts had predicted. But so far he has little to show for it, which has prompted a discussion inside the White House about whether it would be helpful, or counterproductive, to have him talk more openly about military options.

Further complicating this discussion is the November 2 midterm election “shellacking” that Obama and the Democrats received.  Some pundits believe the Democrat’s electoral defeat should cause Obama to tack right on Iran policy, either for purely politically reasons or, crazily enough, even to help jumpstart the economy.
Problem is, Obama has already tried this approach and received little credit from his opponents.  NIAC’s policy director writes in Foreign Policy’s Middle East Channel:

Unfortunately, instead of fighting the Bush paradigm that rewards policymakers on the basis of bellicosity towards Iran, Obama has by and large perpetuated a political metric that defines success on Iran only in terms of pressure. Only if Obama raises the consequences of the dire alternative to a successful engagement strategy — war with Iran — and stakes out a new path to create his own political space for diplomacy, can the president effectively navigate the new reality in Congress and pursue a successful Iran agenda.

After coming into office promising to extend an open hand towards Iran, Obama gradually backed away from this position in favor of a tough sanctions regime.  Still, that wasn’t enough for many Republicans like Graham, because, simply put, Obama will never be able to out-hawk the hawks.  Repeating the mistakes of his first two years in office by further increasing bellicose rhetoric will only result in failure at the negotiating table and a crushing political defeat as Obama continually fails to live up to a standard of “toughness” that he himself set.
So far, it appears the administration is correctly distancing itself from Graham and Netanyahu’s comments.  But now the administration needs to go one step further and push back against provocative and counter-productive statements and generate the political space it needs for a major diplomatic effort.

It is no secret that some of the most hawkish U.S. policies and positions towards Iran over its disputed nuclear program have come not from the Executive branch, but from Congress. Spurred on by AIPAC and other powerful pro-war lobbies and organizations, Congress has become a cesspool for blatant and often bizarre war-mongering Iran resolutions. […]