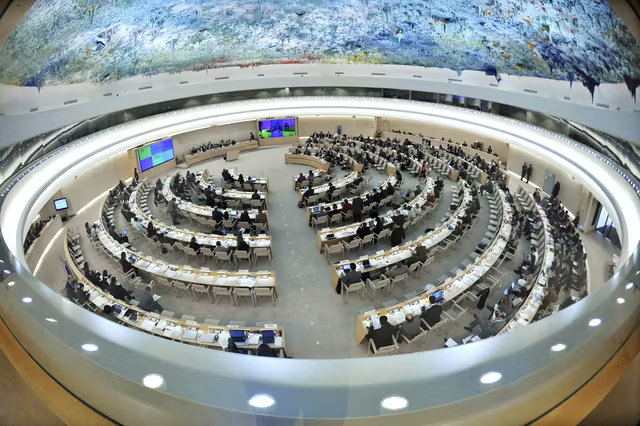 The United Nations Human Rights Council marked its 50th session with days of speakers and presentations to look back on its work, including achievements and lessons, and to look to a future of greater engagement with human rights on a global scale. Yesterday, UN Deputy High Commissioner for Human Rights Nada Al-Nashif presented the Secretary-General’s report on the human rights situation in Iran at the session and called for greater compliance towards human rights and accountability for Iranian authorities. Al-Nashif also tweeted in Persian, noting the appalling use of excessive force by Iranian authorities.

The report highlighted the excessive use of force against Iranian protestors—which is especially concerning as protests grow across the country over economic hardship and general discontent with the political system—increase in executions, and more restrictive legal measures. The report also notes social, political, environmental, as well as economic challenges, including sanctions, which have pushed many Iranians into poverty.

Looking at the period between June 2021-March 2022, the report examines several legal measures and their implications on human rights. These include the Youthful Population and Protection of the Family Law that enacts restrictions on abortion, access to contraceptives and information on family planning, the controversial “Protection Bill” which would further restrict already tenuous internet freedoms for Iranians, and the continued use of article 49 of the constitution which unjustly targets minorities, especially members of the Baha’i religious faith.

According to the report’s findings, at least 310 people were executed in 2021, marking a trend in the increased use of this wholly inhumane punishment. Heightening the injustice of the death penalty, which is itself an abuse of human rights, executions were carried out in cases that did not meet the standards of due process or fair trials. Al-Nashif spent a large portion of her time stressing the fact that, “Patterns of arbitrary deprivation of life due to excessive force used by the authorities against border couriers, peaceful protesters and those in detention, continued with impunity.” Given the dire situation for ordinary Iranians and the likely continuation of protests throughout the country, the repression of protests and use of force against them is particularly alarming. Iranian authorities must abide by their human rights obligations and hold abusers to account.