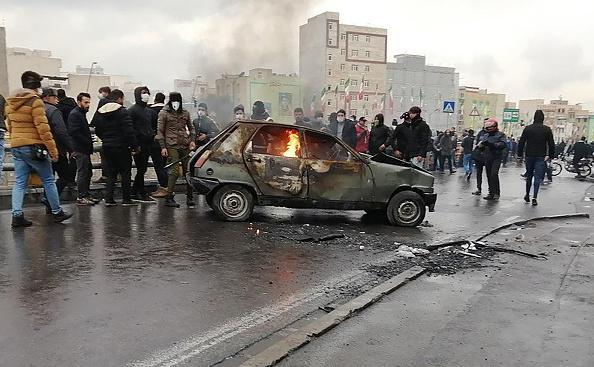 One Year After November 2019 Protests

Protests erupted across Iran last year on November 15, 2019, after Iran’s government announced a significant increase in the price of gas. Those protests were brutally repressed by Iranian authorities, resulting in days of unrest, death, and internet blackout. The rising costs in fuel were yet another blow to an Iranian populace suffering under a struggling economy, weakening currency, and rising prices. The Iranian government’s corruption and mismanagement, along with U.S. sanctions, have hurt Iran’s economy and continue unabated. A year later, the economy has declined further as the Trump administration continues to double down on its policy of economic strangulation.

According to Amnesty International, at least 304 people were killed during demonstrations, as Iranian authorities met protestors with excessive and lethal force. In addition to violent suppression and mass arrests to put down the protests, Iranian authorities attempted to cover-up the assault with a near total internet shutdown, cutting off Iranians from the outside world. After about five days, internet services began to be slowly restored as Iranians started piecing together what horror had transpired.

While the dust has settled on the events of last year and one of the largest displays of Iranian discontent in recent years, the perpetrators of this violence have not been held accountable for their human rights violations. Instead, we have seen Iranian protestors detained and sentenced in Iranian courts for their participation in protests. However, no one is above the law, therefore Iranian officials who carried out such cruel repression, killed hundreds, and arrested thousands must be accountable for their human rights abuses. Anything short of that makes a mockery of a justice system that punishes protestors while letting their killers go free.

Iranians across the globe marked the anniversary of the protests and the ensuing vicious crackdown on Sunday, November 15th. NIAC issued a statement calling on “Iran’s government to uphold its international human rights obligations and urges that Iran’s government expand its recent granting of amnesty to 157 prisoners arrested during the protests and free all prisoners of conscience.” One year later, we remember the innocent lives lost, the significance of free expression, and the plight of Iranian people who suffer not only at the hands of their own callous government, but also at the hands of punishing U.S. sanctions which continue to blight their hopes for economic relief in a pandemic.

See NIAC’s full statement on the anniversary of the November 2019 protests in English and Persian.